The Magic Mountain by Thomas Mann

Posted on 9 February 2012 by Paul Vitols 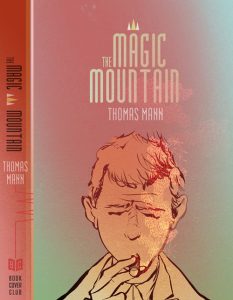 The Magic Mountain by Thomas Mann
My rating: 5 of 5 stars

Finally, after 30 years, I’ve closed the gap and completed the task that Thomas Mann, in his afterword to the novel, suggests for his readers: to read The Magic Mountain not once but twice.

My first reading of it was in the spring and summer of 1982, when I was 23. It was not the first of his works that I had read, for I had already made my way through his short stories, including “Death in Venice“, and before any of those, his late novel Doctor Faustus, which I read first because it happened to be on the bookshelf at home. Even so, it was not our book, for it was on loan from my mother’s friend Dorothy Burt, an avid reader, a close friend of Malcolm Lowry, and a passionate fan of Thomas Mann. It was Dorothy who first made me want to read Thomas Mann, and Dorothy, wherever you are: thank you.

I enjoyed The Magic Mountain very much the first time through, although I was not in a position to get a great deal out of it except the pleasure of sojourning at length in that world of his creation, populated with so many striking and memorable characters. Although I was a writer myself, even a serious one, I did not have the experience or the literary education to appreciate it for its deeper qualities, beyond the realization that these deeper qualities were there to be plumbed by the knowledgeable.

By 1982 I had already read Joseph Campbell‘s Creative Mythology, but I don’t recall applying any of Campbell’s thoughts on that first reading of The Magic Mountain. However, the next time I read Creative Mythology, I paid much more attention to his discussion of The Magic Mountain and his comparison of it with James Joyce’s Ulysses. Campbell regarded them as the two greatest novels of the 20th century, and held them up as examples and products of the unfolding and altogether unprecedented mythology of the modern West: a mythology created not by prophets, priests, or shamans, but by “adequate” individuals—people with the courage and integrity to be their own unique selves. The conveyor of this new “creative” mythology is the artist who is true to his own conscience and his own experience of value, and Campbell regarded Joyce and Mann as the preeminent voices of this new mythology in the literary field.

So The Magic Mountain, set in the years before World War I, is the story of a 22-year-old German, Hans Castorp, who travels to a tuberculosis sanatorium in the Swiss Alps to visit his cousin Joaquim, a young soldier who is taking the rest cure to rid himself of infection before embarking on his military career. Castorp, for his part, is merely taking a quick break before he himself embarks on his own chosen career in nautical engineering. He plans to stay for three weeks.

He stays longer. Much longer. For the bacillus is discovered in his own lungs, and the medical director, Hofrat Behrens, advises him that he too will need to clear his infection before returning to the “flatlands.” So young Castorp settles in to life among the international clientele of the Berghof.

It is a strange life of indolence and routine, in a setting of sumptuous luxury and scenic splendor. Ordinary concepts of time vanish, and before long one forgets about the world below and one’s interests in it, and becomes a feverish, sometimes moribund, patient with little on one’s mind but passing amusements, gossip, and flirtations.

At least, that describes the typical sanatorium patient; everyone is different. One important friendship for Castorp up here is with the down-at-heel Italian pedagogue Ludovico Settembrini, who views the Berghof and its denizens with an ironic and mocking eye. Another important relationship is with the patient Clavdia Chauchat, an attractive and mysterious creature from the wastes of central Russia.

The story is subtle, meandering, and takes its time (my disintegrating pocketbook edition—the same yellow one I read in 1982—runs to 727 pages). If you’re in a rush, this book is not for you. But then, the whole idea of being in a rush is what those at the Berghof would call a “flatland” preoccupation. It arises from a vulgar, bourgeois, and thoughtless attitude toward the great mystery of time. For Hans Castorp, in stepping off the little train in the alpine village, enters what we would now call a time warp, and he soon discovers that he hasn’t the least idea of what time is or how it works. What exactly is it? Indeed, at one point in the book the narrator confides that he is telling a “time-romance”.

That is all I will say about the story itself. Mann is a master artist and he has woven his literary tapestry with great care. I see that it is described as a “novel of ideas”, and I suppose it is; but then I regard every novel as a novel of ideas. Yes, characters talk about ideas, and there is a lot of abstract talk in the book; maybe too much. But that is the milieu here; it is the time and place. The world has not yet slid off the cliff into the conflagration of world war. Ideas are part, but only a part, of Castorp’s journey. Without knowing it, he is on an inward quest of self-discovery, and the the seeming outward events mirror back to him the transformations happening within his own soul, as within the chrysalis of the butterfly.

Is The Magic Mountain the greatest novel of the 20th century? That’s a matter of opinion. In mine, it’s certainly one of them. After this my second reading, I intend to reflect on the book and its meaning over the coming days and weeks, and I fully expect it to repay that reflection. I thought that I couldn’t truly enjoy fiction-reading anymore, but The Magic Mountain has reminded me that I can.

One Response to The Magic Mountain by Thomas Mann