Shakespeare I by William Shakespeare
My rating: 5 of 5 stars

This Britannica Great Books edition of the complete works of Shakespeare offers a serviceable, robust, no-frills, and altogether high-quality experience of this most famous of writers.

It’s a commonplace that Shakespeare is the greatest writer in English literature, and even, according to Harold Bloom and no doubt many others, the greatest writer of all time in any language, full stop. It’s quite a reputation, but despite my lifetime passion for reading and writing, I have had only a slight acquaintance with the Bard, beginning, as I recall, in grade 7 when our school staged a production of Julius Caesar, in which I played Mark Antony. But of course, even at age 13 I was already familiar with lines like “Friends, Romans, countrymen: lend my your ears,” and even “et tu Brute?“. I also would have known that “To be or not to be: that is the question” was also Shakespeare, from Hamlet, and will also have heard many other Shakespeareisms sprinkled into everyday speech around me without recognizing them as such: “what’s in a name?”; “the winter of our discontent”; “all the world’s a stage”.

As I grew up I had occasion to read a few of the plays and see several productions on stage and screen (and even read Mark Antony again in a high-school English-class presentation); but I never really felt comfortable with Shakespeare; I didn’t get Shakespeare. And I think now, at age 53, I still don’t. I find much of the language and the action obscure and hard to follow; I find the storytelling at times capricious and silly. Plus I’ve never been a reader or appreciator of poetry. I sum it all up with a rhyme of my own: the Bard is hard.

I probably would have put off the task of reading Shakespeare–all of him–indefinitely if I had not acquired a set of the Britannica Great Books with the intention of reading the whole thing. Shakespeare forms two volumes (26 and 27) of the 54-volume set; now I’ve read one of those, and I’m very glad I have. I have set about transforming Shakespeare from a reputation into a personal experience, and in so doing I feel I am truly joining the culture of my language.

This volume contains a short biographical note (one and a half pages) and 20 plays, arranged, I believe, in the approximate order of composition. It begins with The First Part of King Henry the Sixth and ends with As You Like It. Before starting the book I considered reading instead from another Shakespeare collection that I happen to own, The Complete Pelican Shakespeare, a handsome book that contains all the plays, plus commentaries. The Britannica edition is relatively sparse: after that short bio, you’re on your own–just you and the Bard for 626 pages (and another 500-odd in volume 27). No Virgil to guide you through the vast creation of this literary genius; no explanations; no summaries; no expert hand-holding. Whatever you’re bringing to the table as a reader, that’s all you’ve got.

I plumped for the Britannica partly because it was lighter and easier to handle, but mainly because I wanted to go along with the philosophy of the Great Books, which is exactly that no commentaries or interpretations are offered. The point of the set is to have readers commune as directly as possible with the greatest writers in the Western tradition. The editors maintain that most of the Great Books were addressed to the general reader. Be this as it may, I found, even though I am an experienced reader, that I was rather scared on my way in. 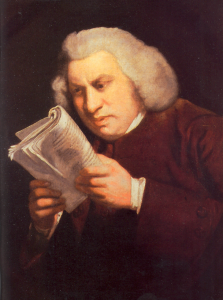 Samuel Johnson immersed in the works of Shakespeare

I soon got over it. It was like diving into cool water: a bit of a shock at first, but after a few strokes you’re on your way, invigorated by the freshness of the water and your own effort.

If, like me, you’re a Shakespeare novice, I recommend the approach I took: read one act a day, out loud. Every play is 5 acts, so you’ll knock down one play every 5 days. And do read them out loud. They are mostly in verse (only the lower-class characters tend to speak in prose, with one or two interesting exceptions), and the rhythm and music of Shakespeare’s language is lost if it is not spoken. And his language does have music and rhythm–he’s not called the greatest for nothing. Don’t look up the words you don’t know or try to do any research while reading. Accept that you won’t understand everything, sometimes not even what’s going on in the action, and least of all (in my case anyway) what the relationships between the darned characters are (OK, I did go back and look up their relationships sometimes at the head of each play). That action is almost always complicated, and if you try to get clear on everything you will bog down. Save fuller comprehension for future readings. In this reading, just let it wash over you. Let your mind meet with Shakespeare’s, and let the quality of that meeting just be what it is; it will be unique to the two of you.

If you do all that, you’ll do what I’ve just done, and I believe you’ll feel about it the way I feel: pretty damn good. I don’t want to say too much about the actual experience of reading it, because then I’ll be polluting your own encounter with the Bard. I’ll say only this: that not all of Shakespeare is equally good, and that I gradually realized that my disapproval of so many of the characters’ motives and actions was because they were so like the way people actually are.

But maybe that’s already saying too much. Try it for yourself. Turn Shakespeare’s reputation into an experience. Expose yourself to the works of one of the greatest users of our language, and step up to a higher level of culture in our Western civilization.

email
This entry was posted in book reviews and tagged As You Like It, Hamlet, Harold Bloom, Henry VI Part 1, Julius Caesar, Mark Antony, Shakespeare, The Complete Pelican Shakespeare, the Great Books. Bookmark the permalink.