Posted on 3 November 2012 by Paul Vitols 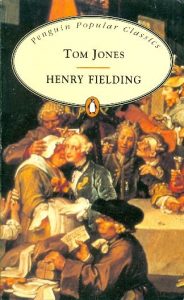 Tom Jones by Henry Fielding
My rating: 5 of 5 stars

This romantic farce holds the mirror up to human nature, and in the maelstrom of passion, folly, vice, and also virtue, we see that while manners have changed (a little) since 1749, the animal who adopts them has not.

I might never have read this book if it were not for the Britannica Great Books of the Western World series, a whole set of which I acquired in 2010 from a lady farmer in Minnesota. The 54-volume set contains just eight novels (the other seven are Gargantua and Pantagruel, Don Quixote, Gulliver’s Travels, Tristram Shandy, Moby-Dick, War and Peace, and The Brothers Karamazov), so it’s intriguing to think of how the editors of the series selected them.

The editors refer to the Great Books as the Great Conversation, and as the best conversation is about ideas, the novels in the set are novels of ideas. Tom Jones is divided into 18 books, the first chapter of each of these being a short humorous essay on some aspect of the work; in book 1, chapter 1, page 1, Fielding, likening himself to a restaurateur, posts his bill of fare, and it is a single dish: Human Nature. While acknowledging that other authors set out to offer the same thing, Fielding asserts that it’s all about how the meal is cooked and presented. And for this reader, as for the editors of the Britannica Great Books, he has here shown himself to be a master chef.

The book is long and composed of a complex interweaving of incidents, but in brief, it’s the story of how a bastard baby boy is discovered right in the very bed of an upright country gentleman named Mr. Allworthy, and how this Mr. Allworthy, a childless widower, decides to raise the boy as his own. The boy, who comes to be named Tom Jones, is raised as a gentleman, and grows to be a handsome, passionate, and exceptionally good-natured young man. He comes to love a beautiful and similarly good-natured girl named Sophia, daughter of the squire of a neighboring estate, but Tom’s status as a bastard precludes marriage with a woman of such quality. That’s a pity, for Sophia herself falls passionately in love with Tom.

Through the machinations of a step-cousin named Blifil, who is concerned about how much of Mr. Allworthy’s estate Tom is destined to receive, Mr. Allworthy is turned against Tom, so much so that he ejects and disinherits poor Tom, who must now make his own way in the world. Indeed, due to the dishonesty and opportunism of the people around him, including some whom Tom has done great favors for, Tom is stripped of the few resources he has, and his reputation with his family is completely and falsely blackened. With barely the shirt on his back and a few coins in his pocket he must seek his fortune.

A series of adventures ensues with a diverse array of colorful, well-observed characters, many of whom recur in surprising and unpredictable contexts. The story is an intricate clockwork of improbable coincidences, with Tom’s heart remaining devoted to Sophia, even as his good looks and passionate nature bring other women into his path who find him much too good to pass up. Sophia, meanwhile, is under siege by her own family to marry Blifil, whom she detests.

The action eventually converges on London, where, among fashionable society, people are even more hypocritical and cynical.

I was continually surprised by the behavior of characters in this book. The dominant human traits that I perceived were selfishness, fickleness, and opportunism. Mixed in with these, though, were generosity, love, and honor. The narrator takes pains at several points to caution the reader not to judge people too harshly, which is an excellent tip, and not just for reading his novel. It got me thinking about my own behavior, my own motives. How selfish am I? How fickle? How opportunistic? I think about a great scene in the TV adaptation of Paul Scott’s Raj Quartet, in which Major Merrick yells at an effeminate sergeant who is nonetheless battle decorated: “So which is it? Are you a hero, or a goddamned pansy?” The sergeant replies, “Quite honestly, major, I think that’s a question we don’t want to be asking ourselves.” Well, I found that Tom Jones got me asking myself questions.

Fielding’s narrator is arch, ironic, and does not hesitate to patronize the reader outright. He attacks literary critics repeatedly and mercilessly. And yet he also shows a becoming if ironic humility, and I get the feeling that his capacity for love was great. Fielding is explicit that he modeled Sophia after his own late wife Charlotte, and the biographical note at the beginning of the volume states that Fielding’s friends remarked on the intensity of his grief when Charlotte died after 10 years of marriage. I can’t help but feel that this novel is in some way a love-letter to her, and that the honorable, lion-hearted bastard Tom Jones was Fielding as he wished he could have been for her sake.

email
This entry was posted in book reviews and tagged Henry Fielding, Man, the Great Books. Bookmark the permalink.