some remarks on my colleague: William Shakespeare

A couple of days ago I finished reading Shakespeare—that is, all of his collected works: 37 plays, 154 sonnets. In doing so I also checked off volumes 26 and 27 of Britannica’s Great Books of the Western World (for the record: I’m not reading the set in order). I think reading projects (or viewing projects, like my History of Cinema Festival, still in progress) are an excellent thing, for they turn “someday” plans into “today” activities. And thus they get done.

So now, having read Shakespeare through once, what can I say about him?

In some ways, not much. For although I’m a good reader, my comprehension of what I was reading was far from perfect. Sometimes I barely understood what was going on, but I just kept soldiering on rather than stopping to figure it out. If full comprehension was my aim, I might still be somewhere back in, who knows, The Third Part of King Henry VI. Indeed, I found that just keeping on reading helped my understanding in some ways, because more clarity seems to come from just letting the words wash over you.

But I don’t want to exaggerate the difficulty of understanding the Bard, because, for the most part, it’s not out of reach. I read, on average, an act a day, and thereby kept my interest fresh. 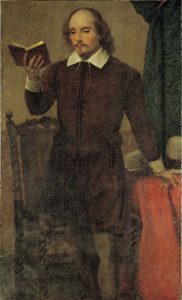 Looking at Shakespeare as a colleague, as a fellow dramatist and storyteller, I perceive him to have strengths and weaknesses. Among his weaknesses, in my opinion, are his handling of exposition and plotting. These are important weaknesses, for they are central to storytelling. Often important exposition—the communication of relevant factual information to the reader—is presented in the form of factual dialogue between incidental characters. Scenes in which characters describe, say, recent events to each other, are nowadays seen as dramatically weak, unless they have some other dramatic purpose as well. True, some of these things may be hard to depict on stage—large battles and such—but no one is forcing the author to write about these things, either.

As for plotting, I felt that while the plays usually have some sense of building tension and action, often there is a meandering quality, with an abrupt or anticlimactic quality to the ending. The very last play in this set, King Henry VIII, is like this. The play ends with a long celebration of the birth of the king’s daughter Elizabeth to his new queen Anne Bullen (as she is styled by Shakespeare). But the real interest of the play for me is in the machinations of Cardinal Wolsey, and Wolsey is dispensed with by the end of act 3. I was sad to see the Machiavellian cardinal go, and the rest of the play was anticlimax for me.

But Wolsey makes a great segue into Shakespeare’s strengths, and one of these is character. His characters are, in the main, vivid and passionate. Wolsey, callous, scheming, and ambitious, is one of these. Indeed, because of him, for the first 3 acts of Henry VIII I felt I was reading my favorite play of the whole lot. I used to be troubled by the nakedness with which Shakespeare’s characters reveal their feelings and motives, not only in their interactions but more especially in their soliloquies and asides; I thought this seemed melodramatic. Now I feel differently. Now I feel that Shakespeare’s characters simply say and do what we all think and feel, even if only half-consciously. The nakedness of, say, Iago’s perfidy and scheming is just our own perfidiousness made unpleasantly obvious. Have I ever executed a plot as dastardly as that carried out by Iago against Othello? No, I hope not. But I have carried out smaller ones, plots that differ only in degree. I have plotted. There is a piece of my id named Iago, and he has had some chance to express himself in my life.

And I can’t leave the topic of character without mentioning the dimensions that Shakespeare can give his characters. A famous example is that of Polonius in Hamlet, seemingly a pompous lightweight, but who gives his son Laertes famously sage advice upon Laertes’ departure for Paris. Macbeth is another example, who belatedly sees the vanity of his ambition and expresses his insights with unforgettable trenchancy and power. I remember hearing John Gielgud recite the “Tomorrow, and tomorrow, and tomorrow” speech on CBC Radio while driving the car, and feeling my eyes smart with tears. Macbeth gets it. He is a bad man, perhaps, but he is even more than that a complex human being. The ruthless king is also a philosopher and a poet.

Ah yes, the poetry. The fact that so many of Shakespeare’s turns of phrase have become cliches tends to blunt the sense of awe at their creation. Just looking at that same speech: “Out, out, brief candle!” Four words. And even now, if I’m honest, I have to tell you that tears come to my eyes. Technically, among other things, it’s an example of the poetic virtue known as economy: saying a lot with a little. Shakespeare’s power to do this is probably unrivaled. Time and again while reading Shakespeare you come across these famous phrases, and it’s clear why they’re famous. No other poet, howsoever great, has left a legacy anything like it to his language.

So there, in a short space, is my impression of Shakespeare, having read him. I’m glad to have done it. I feel I have now, in some degree, truly joined the culture in which I have lived.