The Angels and Us by Mortimer J. Adler 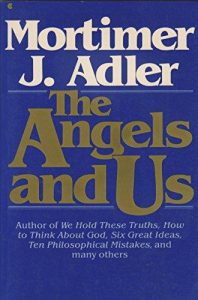 The Angels and Us by Mortimer J. Adler
My rating: 4 of 5 stars

This short philosophical text examines the idea of angels from different points of view, and shows why angels matter—whether we believe in them or not.

In the preface to this book, published when the author was 79, Mortimer J. Adler describes the reception he got from the publisher and the editor-in-chief of the Great Books of the Western World when, in 1945, he submitted his final list of the 102 Great Ideas of Western civilization. At the top of the alphabetical list was Angel, and the publisher, Senator William Benton, then president of the University of Chicago, was “flabbergasted”. Robert Hutchins and other members of the editorial advisory board also protested. They did not agree that Angel belonged in the list of Great Ideas.

Adler must have talked them into it, for if you open up your set of the Great Books right now, you’ll find that Angel still heads the list of the Great Ideas. From their reaction, it seems safe to say that neither Benton nor Hutchins believed in angels, but, as Adler points out repeatedly in The Angels and Us, the idea of angels is important in itself, not only because they form part of a fully developed cosmology that takes account of a spiritual realm, but also, and even more importantly, because in understanding the nature of angels we come to understand the nature of man.

The book is developed in five parts:

1. a prologue in which Adler discusses the importance and possibility of angels

2. an examination of angels as objects of religious belief

3. an examination of angels as objects of philosophical thought

4. a look at what Adler calls “angelistic fallacies” in modern thought, or philosophical errors based on the false attribution of angelic qualities to man

5. an epilogue in which Adler makes some final suggestions about the implications of angelology for the spiritual life of man

The material is handled briefly and with great authority. When Adler refers to the writings of Thomas Aquinas, Augustine, Aristotle, Immanuel Kant, and others, he is discussing works that he has studied in depth and in their entirety over the whole course of his long adult life. He knows what he’s talking about. Few indeed are the people whose depth of knowledge rivals Adler’s on any subject, and still less on so many subjects (Adler was also the editor of the Encyclopedia Britannica). The result is that he is able to pick the key relevant thoughts and words of these authors and use them to make his points.

And what are his points? One is that angels can be viewed from two main aspects: the theological aspect, in which angels are part of the belief system of the religions of Judaism, Christianity, and Islam; and the philosophical aspect, in which angels are viewed as a possibility rather than as an article of faith, and the implications are worked out logically from the assumption of their existence. The theological aspect is grounded in the evidence of sacred texts, such as the Bible; the philosophical aspect is grounded only on the definition of angel as a purely spiritual being. If one’s thinking about them is to be clear, it’s important to keep those two aspects distinct—something, it turns out, that few thinkers have actually achieved, not even the great Aquinas.

Adler does a good job of examining each of these aspects. On the theological side, angels show up often in both the Old and New Testaments, and thus provide lots of material on which theologians have drawn to flesh out the theory of angels. Adler notes, though, that the celestial org-chart of nine orders of angels, laid out by someone writing under the name of Dionysius the Areopagite, is not actually canonical, although many writers, including Aquinas, regarded this writer as authoritative. So those orders have no true scriptural basis. Also, the notion of guardian angels, and in particular the idea that each of us has a unique guardian angel devoted to us alone, is based on slender evidence from scripture, and many authorities don’t regard it as scripturally based.

On the philosophical side Adler, a professional philosopher, is in his element, but he acknowledges that not very much can be stated with certainty based only on the assumption of the existence of angels. He spends time showing that the best thinker about angels was indeed Aquinas, and that Aquinas made persuasive arguments that angels, as purely spiritual beings, must also be purely intellectual in nature; that is, they must lack those mental faculties that arise from having a physical body, such as sensations and imagination, as well as faculties that depend on these, such as discursive reasoning. What angels know they know immediately by infallible intuition, based on the ideas with which they were endowed upon their creation by God.

Angels experience love, but only of the highest kind—the charity that wills good for another. And they communicate, but only telepathically, not via any bodily means.

Adler doesn’t say whether he himself believes in angels, but I get the feeling that he does. He admits that the philosophical idea of angels is hard or impossible to visualize; all of the representations of angels in art and literature have been poetic analogies to express the qualities of angels. At the same time, though, the Bible does assert that angels can appear in human form; Adler discusses how this can be so without the angels’ having to assume actual physical bodies.

Adler has strong opinions which he is not shy about expressing. The assertions of many of the greatest thinkers, such as Descartes, Locke, Kant, and others, he deems to be erroneous. So much for them. And I think you would have to agree—if you accepted all his premises. For my part, I’m not sure I do. For example, the idea that angels have free choice, but only in the first instant after their creation (it was after this instant that certain angels were thought to have “fallen” and become demons), seems like an unreasonable limitation that exists only because of philosophers’ faith in their starting premises. Can angels really be less free than humans in this respect?

Still, this book is richly illuminating and extremely well informed on its subject. Plus there’s a really nice discursive bibliography at the end for the interested reader.

Do I believe in angels? I think I do. And as against the philosophers I’ll stand with Hamlet:

There are more things in heaven and earth, Horatio,
Than are dreamt of in your philosophy.