Counsellor at Law: more than King Kong up that Empire State Building

Posted on 2 November 2014 by Paul Vitols

Last night I launched Paul’s Crème de la Crème Festival—a series of the best movies discovered in my 6-year-long chronological History of Cinema Festival. These were the movies that I rated either 9 or 10 out of 10 on IMDb. The first in my new festival was the 1933 social drama Counsellor at Law starring John Barrymore.

When I first saw the movie in 2009, I was so impressed that I rated it 10/10. On re-viewing last night, the film still impressed me, but considering it against the whole sweep of shows produced since then, I adjusted my rating down to a 9. If I were rating it out of 100, I think I would give it an 88. In any case, even at this rating it stays in my Crème de la Crème Festival.

The film was written by Elmer Rice, based on his 1931 stage play, which had been most successful. Rice, who had won the Pulitzer Prize in 1929, was one of America’s most prominent playwrights, and, according to Wikipedia, Universal Pictures producer Carl Laemmle Jr. payed $150,000 for the screen rights, a high figure for the Depression. 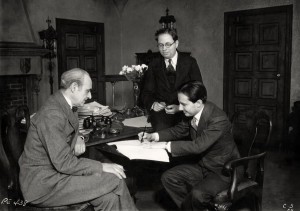 Rice, who had been born in New York City in 1892 as Elmer Leopold Reizenstein, grew up in the tenements of East 90th Street and was forced to quit high school in order to help support his family. Nonetheless, in time he applied to New York Law School, was accepted, and graduated in 1912 to practice law for only two years before taking up writing full time. This was made possible by the tremendous success of his first play, a courtroom murder mystery entitled On Trial, which, again according to Wikipedia, ultimately earned him $100,000.

Counsellor at Law is not a courtroom drama but a law office drama: it pictures a time of crisis in the life of prominent litigator George Simon (John Barrymore) of Simon & Tedesco, a top Manhattan firm with sumptuous offices high in the Empire State Building. Simon, like Rice (and like director William Wyler, born Willy Wyler in Germany), is Jewish and has climbed up from the tenements of New York. Along the way he has further secured his social position by marrying a gentile divorcee named Cora (Doris Kenyon), who has two children by her first marriage. In his work he is assisted by his attractive and very able secretary Rexy Gordon (Bebe Daniels), who struggles not to show that she’s in love with her boss. On this day, just as Simon is about to head off on a European vacation with his wife, bad news arrives: some investigator has dug up evidence that Simon, years ago, helped to falsify evidence to secure the acquittal of a young client who, like himself, was a poor immigrant. Suddenly George Simon is facing the prospect of disbarment and the end of his career. At the same time, even as Simon prepares for the romantic getaway with his wife, he perceives a new coolness in her toward him, and a troubling closeness between her and one of his clients, a certain Roy Darwin.

The author Rice’s authority with regard to the workings of a New York law office permeates the story: an assortment of unique, often comic characters float through the scene like tropical fish in an aquarium. Several little subplots and running gags help to cinch together the goings-on, such as the gossipy banter of Bessie the switchboard girl, Rexy’s frosty rebuffs of the unwanted attentions of junior lawyer Weinberg, and repeated visits by Simon’s mother as she tries to get her “good boy” son to help his ne’er-do-well brother. People criss-cross the scene attending to their own business, commenting on each other and exchanging repartee. A more ominous development is when Bessie is made ill by seeing a man jumping from a high-rise window.

George Simon himself is an engaging character, on the one hand a type-A personality barking orders at his secretaries and other subordinates and playing hardball in various concurrent negotiations, on the other a soft touch for people who need help, especially people who, like himself, come from the wrong side of the tracks. John Barrymore makes an unlikely ghetto Jew (Paul Muni had turned the part down because he didn’t want to be typecast as a Jew), but he does a great job of portraying George Simon as a tough, nervous, and conflicted character. (He made life difficult for Wyler though, not just because of his heavy drinking, but because his memory was already starting to go. Wyler eventually resorted to planting cue cards around the set for Barrymore to read while playing the scenes.) My own feeling about him was that he was really a softie who had acquired a hard persona in order to succeed; I really liked how his fingers would nervously drum sometimes while he was talking.

My dominant impression, both when I first saw the film and again when I watched it last night, is that this is an adult film in the true sense: it portrays adult concerns in a mature way. The way Simon relates with his stepchildren, who have no use for him, is painful to watch—and all too real. Already, in his first serious film, William Wyler’s gift for eliciting deep, nuanced performances from actors is on display. This quality of adult handling of adult material is what I would say characterizes Wyler’s style as a director.

Because the story is authentic, because the writer knew whereof he wrote, this film feels modern today. Except for the difference in fashions, slang, and city, this is much like the 1980s TV hit L.A. Law. But Counsellor at Law digs deeper: it shows a conflict of cultures between entitled patricians and upstart immigrants trying to live the American dream. It shows the seat-of-the-pants deal-making that often passes for justice in the real world. It shows human hearts squeezed between the art deco glass panes of the Empire State Building—people stuffing their tender feelings in order to survive in a hard environment.

In all, it was an auspicious kickoff to Paul’s Crème de la Crème Festival. I’ve downgraded it, but it remains on my list of the best 100 movies of all time.