It Happened One Night: love as fun

Posted on 4 November 2014 by Paul Vitols

Last night we viewed movie #2 in my new Paul’s Crème de la Crème Festival: It Happened One Night, released in 1934 and starring Clark Gable and Claudette Colbert. As of now, 50,424 people have rated it on IMDb to give it a weighted rating of 8.3 out of 10. As for me, on this sober re-viewing for the 4th or 5th time, I confirmed my own rating of 10 out of 10. I found it a great pleasure to watch, end to end. 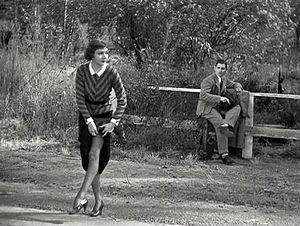 Claudette Colbert showing Clark Gable how to hitchhike for results.

The underlying property for the movie was a short story, “Night Bus,” written by Samuel Hopkins Adams and published in the August 1933 issue of Cosmopolitan magazine (in its incarnation as a literary and investigative journal). Adams, born in 1871, was a versatile writer, perhaps best known as a muckraking journalist: a series of his investigative pieces in Collier’s Weekly about false advertising in medicine helped bring about the Pure Food and Drug Act of 1906. But he also put out many novels and short stories, including this lighthearted romance.

The story was adapted for the screen by Robert Riskin, Frank Capra’s longtime collaborator. Riskin, who, while growing up on New York’s Lower East Side, would sneak into vaudeville shows to write down comedians’ jokes, no doubt added much of the snappy, cheeky dialogue. (In one scene, when Gable’s character finds that Colbert’s character has taken his seat on the bus, he says, “Excuse me, miss, but what you’re sitting on belongs to me.” Dialogue like that would become a thing of the past as the Motion Picture Production Code guidelines started to be enforced in that same year, 1934.) But the story that the writers delivered (and I have to assume that the director, Frank Capra, had no small hand in this, since he had done film writing himself and in any case relied heavily on improvisation while filming), while whimsical, light, and fun, was also brimming with genuine, tender emotion.

The story is about how Ellie Andrews (Colbert), the headstrong daughter of a wealthy industrialist (Walter Connolly), has impulsively married a glamorous aviator named “King” Westley (Jameson Thomas). Imprisoned in her stateroom on her father’s yacht in St. Petersburg, Florida, until she agrees to have the marriage annulled, she manages to dive overboard and escape. Now she seeks to flee north, eluding the long arm of her father in order to be with her husband in New York. Among the passengers on the bus she climbs aboard is irreverent reporter Peter Warne (Gable), freshly fired from his last job. When he discover’s Ellie’s true identity, he sees an opportunity for a great news story, and offers to help get her to her beloved Westley in exchange for an exclusive. But their work is cut out for them, for it turns out that they’ve only got about $6 between them. And, their penury forcing them into greater privation and intimacy than either of them would choose, they get to know and appreciate each other.

I believe that this movie is a landmark in the genre of romantic comedy. The film has also been classed as a “screwball comedy,” and I think that the joining together of these elements, the romantic and the screwball, makes for a story in which we see the man and the woman, this unlikely but likable couple, having fun together. In a sense, the story is about the two of them coming to realize just how much fun they’re having.

The world around them helps them along, for, true to the style that would become his hallmark, Capra depicts all his characters as basically affectionate and mutually supportive. Even the real conflicts between them tend to be moments of comedy rather than anything tense or threatening. It’s as though the pulse under all is saying, “Fear not: the things you think are a big deal are no big deal. The moments of sweetness that can exist between all people—that’s the big deal.”

In such a world, when an attractive and deserving couple are thrown together, it’s easy to root for nature to take her course, no matter how improbable that course might seem.