birth of the (serious) writer

I’ve finally got my mailing-list signup form up and running (see sidebar to the left), and as an immediate bonus for signing up, my new subscriber (such as, for instance, your own good self) receives an e-book version of my first serious short story, “The Hermit.”

I say serious short story to distinguish it from my efforts up until that point, which had all been written while I was in public school (even though most of my writing had been extracurricular). “The Hermit” was a self-conscious effort to write the best story I could; it was intended to reach highest literary peak I was capable of, and it was written in an emotional state that flowed between the poles of exaltation and anxiety. 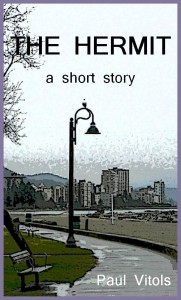 I wrote it between September 1979 and January 1980, at age 20, through my first and only term of university at UBC in Vancouver. I had entered the faculty of arts there after a two-year hiatus from school in which I had worked and traveled, tussling within myself over whether I wanted to pursue a career in art or in science, for both pulled at me.

While growing up I never doubted that I would become a scientist—a space scientist of some kind. I was excited by cosmology and by the search for extraterrestrial intelligence. But I had always loved writing. And by the end of high school I had entered a crisis in which I was no longer sure about what direction my life should take. I was especially affected by reading James Joyce’s A Portrait of the Artist as a Young Man, which a perceptive English teacher had put in front of me. I was electified by this story of a young man finding his artistic vocation as a writer, and I realized that it was—or could be—my own story. Everything I thought I’d known about myself was thrown into doubt.

Two years later, when I started at UBC, I still had not arrived at a decision. I entered the arts faculty, but chose courses that could be ported over to science if I wanted to switch: mathematics, computer science. I was lonely and alienated from my fellow students—all 25,000 or so of them—on the paradise campus of UBC. I felt driven to give expression to my feelings—but how? With what?

Shortly after beginning the year I started writing a short story, one that I intended to be a serious, adult effort; one that would announce my vocation as an artist. Among the things I had been studying in my search for vocation and meaning were astrology and the Tarot, and I became drawn to the Tarot card called The Hermit—the ninth card in the so-called major arcana of the Tarot pack. An idea came to me about a solitary character walking the seawall in Stanley Park, and I was so excited by this idea that I caught a bus downtown to the park and started walking it myself. It was a sunny day in September, but even though I wanted to set my story later, in November I still absorbed the sensations of being there. Seen through the eyes of the artist, the whole scene was charged with meaning, with depth. I wanted to bring this to my story.

I returned home to the town house where I lived with my mother, aunt, and sister, and, sitting on a stool at the slanted drawing table below my long bedroom window that looked south up the slope of Fairview, I started writing “The Hermit” on sheets of ruled foolscap. I was a good typist, but I wanted to compose this in longhand, which by then I believed was how the best writing was done.

The composition was tortuous. I fretted, I worried, I scribbled out and wrote in margins—all things that were not really natural for me, for I had always been a fluent writer. But I wanted it to be artistic; I wanted it to be my best. James Joyce was still my guiding light. And as he, with his collection of Dubliners, had wanted to “give Dublin to the world,” I wanted in my own small way to give Vancouver to the world—to write a story about Vancouver, or anyway definitely set there. It was my city; I had been born only two or three stones’ throws from the Stanley Park seawall where my hero, Alex, takes his solitary walk.

By the time I finished drafting the story I was no longer a student (although my English prof at UBC, Lee Whitehead, had generously allowed me to submit it as one of the major assignments for his course, and was equally generous in his appreciation of the story). But the story was never published until I brought it out myself in 2012 as an e-book (and who did the cover art, you ask? Moi). Now I see it as the manifesto of my vocation as an artist—for that is the path I chose. Indeed I remember the moment I chose it: it was in the Sedgewick Library at UBC, just before my math final in December 1979 (but that’s another story). I can’t say it’s been an easy one, although I have no regrets.

As for the merits of the story itself, it is not for me to say what they might be. The author was a passionate young fellow of 20, and I can say that he put his heart and brain into it. He did his best.

But I invite you to be the judge. Sign up to my mailing list and download your own copy, bypassing the 99-cent purchase price. If you ever want to stop receiving my infrequent emails, you can unsubscribe at any time. Who knows—you might even enjoy them!

In the meantime, a lonely young man stands ready for a visit.