When my father arrived, at age 14, with his mother in Halifax in 1948 as a refugee from Germany, it had been 4 years since he had last seen his father, Alexander. Alexander had waved goodbye to them from the dock in Riga, Latvia, as they fled by ship from the advancing Soviet army, which was threatening to recapture the city from the Germans. The expectation was that the Germans would soon push the Red Army back again, but it was not to be: my father and grandmother spent the rest of the war in refugee camps in Nazi Germany, and stayed on as displaced persons in Red Cross camps after the war. As for Alexander, he was later captured by the Soviets when trying to make his own escape by ship to Sweden, and spent the rest of the war at a work camp in Siberia, shoveling snow from railroads. When the Iron Curtain fell across Eastern Europe, he was marooned behind it, and was not heard of again—until about 1975, when my father was astonished to receive a letter from him in Canada.

They began a correspondence, but there was no practical way for them to meet, since it was not feasible for Alexander to leave Latvia (where he had resettled after the war), and my father ran the risk of being detained permanently in Soviet Latvia if he returned there. In 1981, at age 22, I set off on a journey of self-discovery and literary research to Europe, Israel, and northeast Africa. By February 1982 I was in Kenya, and, looking to return to Europe, I discovered that the cheapest way, by far, was to fly Aeroflot from Nairobi to Rome. But all Aeroflot flights shared a quirk: they were routed through Moscow. That’s right: the cheapest way for me to get from Nairobi to Rome was via Moscow, which is farther from Nairobi than Rome. And the idea came to me: if I have to go to Moscow anyway, why not take a side trip to Riga and visit my granddad?

So I booked the flights and went. In the cold and gray of Riga in March, I arrived by taxi at the drab concrete apartment block where he was supposed to be. I had taught myself the Cyrillic alphabet in order to recognize his—our—name in the phone book and other places, and in the lobby of the building the directory was indeed all in Cyrillic—except for the name of my grandfather. For whatever reason, possibly because he was the only ethnic Latvian in the building, it was the lone name in Roman letters: VITOLS, A. It jumped out at me and I felt a spark of excitement.

Nervously I headed up the stairs. There, at the end of the corridor, was the door. I took a breath and knocked. It was opened by a pleasant-looking woman of retirement age. I knew this to be Vallije, my grandfather’s second wife.

Not knowing either Latvian or Russian, I said, “Hello—is Alexander here?”

The woman, puzzled, nodded uncertainly and retreated back into the apartment. Soon she returned, following a tall, well-built man with thick white hair. He was frowning and looked rather suspicious.

“I just have to tell the taxi driver to go,” I said. 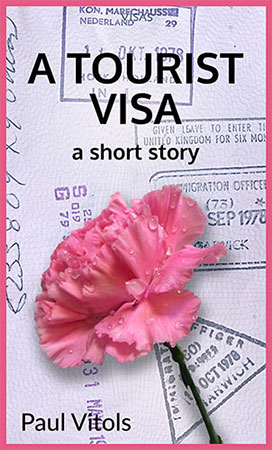 Soon I had to leave Riga and make my way back home to Vancouver, and my proto-story was left unfinished. Three years later, CBC Radio held one of its occasional short-story contests, so I decided to dust off A Tourist Visa, as my story was now called, finish it, and submit it.

I dashed downstairs, then dashed back up, and was ushered into my grandfather’s cozy apartment, where they immediately started plying me with food and drink. Granddad insisted that I move from the hotel where I was registered to stay with them, and so began a visit of 10 days or so with the grandfather I had never met. To my great good fortune, Alexander had taken up the study of English as a retirement hobby, and spoke it well. During my stay he talked with me, took me on outings, and overfed me. He must have been well connected, for he had a stock of scotch whisky, which he poured unstintingly for me at lunch and dinner, and perhaps also for breakfast. I loved it!

I was nearing the end of a long, strange trip, and my impressions were stimulating my creativity. I had been writing letters and taking notes, but I wanted to write fiction again. Unable to wait, I dropped my pen and started to write about my experiences there in Riga. I didn’t really have a story idea, just a few vivid experiences, so I started writing about those. At some point I realized that I could build a story around my encounter with the local office of the Soviet Intourist Bureau, and a girl I met there.

I didn’t win the contest. There being few markets for short stories, and I having other writing projects on the go, I chalked it up to experience and filed away my carbon copy of the story. But now, with the advent of e-books and e-publishing, I realized that there is a market for short stories again. So I have again drawn A Tourist Visa from the darkness of a filing box back into the light of day—its second rebirth—and have published it for all the world to see.

The opening sentence? Here it is:

I returned to the mezzanine of the Latvia Hotel, carrying in my windbreaker pocket a little dagger to thrust in the malignant lard of the tourist officer.

How does that hit you? If you’d like to read more, visit Amazon or Smashwords—or the online retailer of your choice, and dig in. See what stirred the imagination of a young writer visiting his ancestral homeland behind the Iron Curtain.