One of my reading projects right now is to reread the Old Testament. I’ve been wanting to reread it for a couple of reasons: it’s part of the Great Books reading program, and it is also a key text for my own work in progress, The Age of Pisces. In addition, I’m keeping my eye open for any interesting figures of speech that I come across (I’m reading the King James Version), for I learned in a National Geographic article a couple of years ago that the Bible is the source of many well-known figures of speech that we use today. (The most-used of these is the phrase, “from time to time”—did you know that’s from the Bible?)

So I’m doing all those things, but the impetus for this reread came from still another inspiration. But to explain it I’ll have to back up a step or two. 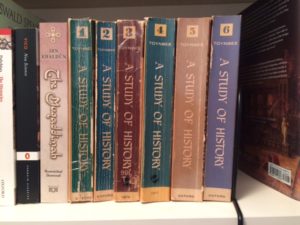 I’m impressed and inspired by Arnold J. Toynbee’s masterwork, A Study of History, which runs to 11 volumes, including the final volume of maps and gazetteer, all published between 1934 and 1961, and of which I have 6 battered paperback volumes on my shelves. Of these, I’ve read about four and a half, but I intend to read the whole set, for it is a work of genius. Toynbee’s program was to study how civilizations arise, develop, and dissolve; he set out to identify all the civilizations that have been known to exist, and to find their common features and behaviors.

One of his contentions is that all civilizations have a spiritual core and are centered on a religion or, in his terminology, a church. It is for this reason that Toynbee calls our own civilization—that is, the one in which I sit as I type these words—Western Christendom, instead of the more usual Western civilization. He shows how the civilization we call Western developed around and because of the Christian Church, that is, the Roman Catholic Church. For when the Eastern Roman Empire, based in Constantinople, finally split with the West, which was still based in Rome, a separate civilization was born, namely Eastern Christendom. Eastern Christendom also lives on, embracing those countries in which Orthodox Christianity is the main church, such as Greece and Russia.

As I thought about all this, an idea came to me. If the nucleus of Western Christendom is the Christian Church, then might not the Bible be, in effect, the genome of this civilization? For it is the sacred text on which the church is based. It is the ultimate source and warrant for the idea content of the church, and therefore of the surrounding civilization.

If the Bible is the genome of Western Christendom, then what are the individual genes that make up that genome? The Bible’s books? Its chapters? Its verses? No, I decided that these are all too arbitrary to function as genes. Incidentally, for you geneticists out there, I’ve come up with my own definition of gene, and I offer it here gratis:

A gene must be a functional unit, or it could not be identified as an effective entity. So what are my metaphorical biblical genes? I decided that the genes must be the episodes of the Bible.

And what exactly is an episode? Here I’ll turn to my Webster’s:

a usually brief unit of action in a dramatic or literary work: as . . . a developed situation that is integral to but separable from a continuous narrative

I was excited by this idea. I would read the whole Bible, starting with the five Books of Moses but ideally the whole thing, breaking it down into its component episodes, and doing my best to derive the meanings of those episodes—their points, their ideas, their themes. I believe that such meanings can be summed up in sentence form as propositions. These propositions, my thinking went, would then be the actual idea genome of Western Christendom—my home civilization. Acting like mental or spiritual genes—perhaps what Richard Dawkins would call memes—they would form the operating rules, or, if you like, the program of the civilization. My thought was that, if you looked at the way our civilization behaves, what it does, then the rules for its behavior might be coded up in these “genes”—these episodic propositions from the Bible.

I’ve taken a metaphor and run very far with it. But who knows, maybe I can run all the way for a touchdown. Anyway, it has made me excited about reading the Bible again. So far, I’ve read Genesis and the first 25 chapters of Exodus, and in the 50 chapters of Genesis I have identified 118 episodes. As an example, my analysis found that episode 1 of Genesis runs from Gen 1:1–2:3. I summarized the content of the episode thus:

God creates heaven, earth, light, land, seas, plants, sun, moon, stars, animals, man, woman, and gives humans dominion over all life, and blesses the 7th day, on which he rests from his creating.

From this, I tried to draw some summary propositions:

God is the creator of the world and of the order of life within it, and has inaugurated a 7-day rhythm to life, punctuated by a sacred day of rest each 7th day.

From these summary propositions I went a step further, and formulated a set of implied rules:

What do you think? I’m doing my best to report what I find in the King James text, and not to read my own meanings into it.

I have gone through a similar process for all 118 episodes of Genesis. It’s a laborious way to read the Bible, but man, I’m getting a lot out of it. I’ve come to regard the books of the Bible as its chromosomes. So I’ve “sequenced” chromosome 1 and I’m about halfway through chromosome 2. Will my project take me as long as the Human Genome Project?

We shall see. Meanwhile, I’m reading the Bible in a way that feels exciting and that is opening the door to new discoveries. Not bad, for the oldest of the Great Books.

email
This entry was posted in thoughts and tagged Arnold J. Toynbee, Genesis, reading, The Age of Pisces, the Bible, Western Christendom. Bookmark the permalink.