not only public libraries have stacks

Ever since late adolescence I have maintained a reading stack: a stack of books that are all more or less on the go at the same time. When I was in my early 20s, my two roommates, semifacetiously, made a rule that my stack could not exceed a certain size (I think it was 8 books), but the rule was a dead letter upon enactment, since by then this style of reading had become entrenched with me.

I like reading more than one book at a time. I have a number of different interest, and I like to support them through reading.  And my attention span is such that I can’t stick with any one text for too long; generally, an hour is all that I can stand reading anything, no matter how much I’m enjoying it or passionate I am about the topic at that moment. I become fatigued and need to change. With my stack, I just put down one book and pull out another one.

This the stack as it exists at this moment. The table stands on the left hand of my reading chair, a nice chair of soft brown leather. The books currently on active service are the top 4 in the stack. 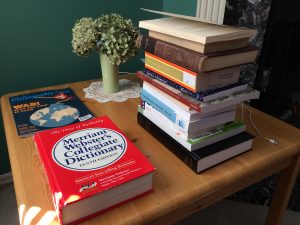 Books do furnish a room

The one on top is Mindfulness with Breathing: A Manual for Serious Beginners by Buddhadasa Bhikkhu, a Thai meditation master (now deceased: he died in 1993). As I recall, this was one of the books I was put on to in the bibliography of Daniel Goleman’s The Meditative Mind (although now, darn it, I can’t find it in there). Anyway, I like to start my reading period with a dharma book, as an expression of the idea that my spiritual development is my top priority in life. I wanted to learn more about the details of mindfulness meditation, and this book looked promising. It’s quite different from what I’m used to, since Buddhadasa was in the tradition of Southern Buddhism, which has its main stronghold in the Theravada schools of Sri Lanka, and my own tradition is within the Vajrayana world of Northern Buddhism, but for some reason I have an appetite to expand my horizon and learn more about the teachings as the Buddha first presented them. So: Mindfulness with Breathing.

Next each day I read fiction. Right now I’m making my way—with great enjoyment—through David Copperfield by Charles Dickens. It’s the thick paperback (982 pages) in 4th spot in the stack, and it’s a library book. I don’t usually buy fiction (I know—and me a writer of it): too many experiences of buyer’s remorse. Generally a novel has to prove itself to me before I’ll buy it. David Copperfield is good enough to buy. As I recall, it made it onto my reading list (a Notes document I keep on my iPhone) because it is mentioned early in The Catcher in the Rye as the kind of book that Holden Caulfield does not wish to write about himself. I’d already put The Catcher in the Rye on my list (although I’d read it before as a teenager), so I thought I should read Dickens’ work before trying Salinger’s again. Plus I have long wanted to remedy the lack of Dickens in my reading history. So David Copperfield it is, and wow, what a book. More on that anon, when I finish it.

The next slot in my daily reading period I devote to the Great Books, a used set of which I acquired in 2010. I’ve tried different approaches to reading the books, but have settled at last on a basically chronological approach. My plan is to read the whole set chronologically, starting with the Old Testament (although Encyclopedia Britannica did not actually include a version of the OT in their set, since the Bible is so universally available). But for variety I switch between works, and I’m doing this in an orderly way. Basically that means that right now I am switching between the Bible, Plato, and Aristotle. Book number 3 in the stack is volume 8 of the Britannica Great Books: Aristotle I. I’m currently reading his book entitled On Generation and Corruption, which discusses how things come to be, how they grow, change, and interact, and how they cease to be. While some of the ideas sound quaint, the underlying philosophical problems are still with us. It’s heavy going, and I can manage only 3 or 4 pages a day (this volume runs to 726 pages). When I’ve read 100 pages of it, I’ll cycle back to the Bible.

Next is research reading for the book project I’m working on with my mother, a collection of letters that we’re calling The Hour of Separation (taken from a line by Kahlil Gibran). These are love letters by our late friends Harvey and Dorothy Burt, and they form a passionate and fascinating collection. So I’m putting together a book proposal, and toward that end I’m reading other books that may possibly comparable in some way to the book we’re proposing. Right now I’m reading Nella Last’s War: The Second World War Diaries of Housewife, 49. This is the published journal of a housewife who lived in Barrow-in-Furness, England, and who participated in a project known as Mass-Observation, in which volunteers from around the country agreed to keep diaries of their daily life and to submit these to the project managers. Nella Last was one of the best and most devoted of these volunteers, and her journal provides a detailed view of everyday life during the war years in the U.K. The relationship to our project is that it’s an intimate slice of real life as told by the one living it. The Hour of Separation does something similar, but in the context of a love affair conducted in the mid-1950s. Nella Last is a good writer—but our correspondents, Harvey and Dorothy, are also very good writers, and writing not for posterity, but for each other. The result is something much more intimate and intense.

The rest of the books in the stack, with one exception, are a combination of new books that I have not yet started and books that I have left off reading but have not yet admitted that I’m done with for now and should be reshelved. The exception is a book called Cosmos, Chaos, and the World to Come: The Ancient Roots of Apocalyptic Faith by Norman Cohn. I was put onto this book by looking back through Omens of Millennnium by Harold Bloom, where Bloom refers to it as one of his major authorities on the subject of angels. Angels are of great interest to me, so I determined that I should get Cohn’s book. I was ready to buy a copy, but some vague suspicion caused me to scan my own bookshelves first: sure enough, I already had a copy! I’d got it in February 2007 and had not yet read it (I had started it—the first chapter was heavily highlighted.) So I pulled it down and started reading. A bit dry and dense, but rich with things that interest me. But in my current situation, I don’t usually manage to get to it on any given day. The other 4 books have me tired out by that stage.

So there you have it. You’ll also note the handy Webster’s dictionary (10th edition; the 11th edition is here at my desk, for work) and, behind that, a copy of Philosophy Now magazine. It’s issue #124, February/March 2018. You might want to get yourself a copy, for they have published a letter from me. They’ve given it the title “The Buddhist Boomerang,” and it’s quite good if I say so myself. But maybe more on that later. They didn’t alert me that they were going to publish it; I just opened the magazine and there it was. Fun!

You’re acquainted now with the current incarnation of my beloved stack. Perhaps I will keep you posted as it evolves and changes. Can you handle that much excitement?

email
This entry was posted in thoughts and tagged Buddhadasa Bhikkhu, Charles Dickens, David Copperfield, Nella Last's War, Phiosophy Now, reading, The Catcher in the Rye, the Great Books, The Hour of Separation. Bookmark the permalink.