What do writers think about when they read? I can’t speak for others, but for my part I like to get involved with a book.

But what form does that involvement take? To some extent, it depends on the book. Really, I want to get as much out of a book as I can, and that might take different kinds of effort in each case. In reading fiction, I want to let my imagination have free rein. When I was as teenager I used to pause in my reading to imagine the scenes as vividly as I could. I haven’t done that for a long time—I should!

Then there is the issue of ideas. All writing contains ideas of some kind, since every word stands for an idea; but in the best writing the ideas are bigger and connected in deeper and subtler ways. They stimulate and provoke, if you let them. But an education in ideas, a liberal education, is needed in order for this to happen most powerfully.

I’m still reading Julie, or the New Heloise by Jean-Jacques Rousseau; I could share some of my thoughts about that. I first heard of the book in a work called The Romantic Movement by Maurice Cranston, a primer on Romanticism by an authority in the field. Cranston states in his first paragraph that Rousseau was the first of the Romantics, and that he “introduced” the movement in 1761 with the publication of La nouvelle Heloise, “the original romantic novel.” The ideas that would come to define Romanticism had already been sketched by Rousseau in his writings on music. Rousseau, who was Swiss, was instrumental in shaking up the musical world of Paris when he arrived there and published pamphlets and operatic librettos inspired by Italian opera. In simple terms, Rousseau wanted to enliven French music by steering it away from glorifying myths of the splendor of French kings and toward a more simple and natural mode of expression. In Cranston’s words:

French music was academic, authoritarian, elitiste; Italian music by contrast was natural, spontaneous, popular, and seemed to obey no fixed rules at all.

Romanticism would come to be associated with nature and the emotions, while Classicism, the style that it sought to replace or anyway complement, was devoted to reason and order.

In fiction, the Romantic theme would come to be expressed in the story of a love triangle, in which an ardent young man falls in love with a young woman who, though also ardent, is not available to the man by reason of being of a higher class or already betrothed, or some other such social obstacle. In the true Romantic plot, the young man’s heart is broken when the woman finally chooses the more socially acceptable suitor. If you look for it, you can seen this Romantic plot playing out in many famous stories, such as Wuthering Heights. Margaret Mitchell gave the plot a twist by telling it from the woman’s point of view in Gone with the Wind. In Rousseau’s case, the plot was one that had played out in his own life, since he, like his unnamed hero, became attached to an aristocratic household in Switzerland as a tutor to the daughter of the family, and fell in love with the girl, as she also fell in love with him.

He subtitles his novel The New Heloise, which points back to a famous or infamous love affair of the 12th century in France between the philosopher Peter Abelard and the young woman Heloise. Abelard was engaged by Heloise’s uncle and guardian to tutor the girl, and before long the two of them fell in love and made use of their meetings to carry on a clandestine affair. There was even a child, Astrolabe, born of this union. When the uncle discovered what was going on, he was so furious that he arranged to have Abelard attacked in the night and castrated. Heloise and Abelard both wound up taking orders and living out their days in monastic seclusion. They exchanged letters that are famous and still in print. Heloise, although she became a very respected nun, remained devoted to her lover, not to God, whom she never could learn to love after what he had allowed to happen to Abelard. 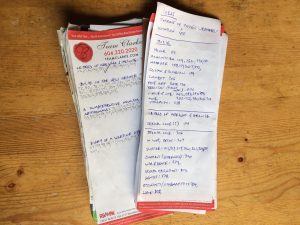 Found a use for those realtors’ notepads

I’m about halfway through the book, and it remains to be seen in what ways Julie is “the new Heloise.” No castrations so far, though, I’m happy to report. Epistolary novels don’t usually interest me, but I’m finding this one engrossing. So did its original readers; apparently when it was first published it was an instant bestseller, and there was feverish desire to know whether the letters were real (Rousseau wrote the book in such a way as to leave that question open). French women were aching to find Rousseau’s frustrated lover (eventually given the pseudonym “St. Preux” in the book), or at least someone like him; and Julie, the heroine, was viewed as a new paragon of womanhood.

The young lovers are passionate, intelligent, and educated. The attraction they feel for each other is almost unbearably intense and is controlled only with the utmost difficulty. But, intriguingly, the lovers’ primary concern is virtue; they wish to be good people, and want more than anything to resolve their love in a way that is consistent with that desire. Julie, in particular, is tormented by the suffering she may bring her family, and by the possible strain she may place on her parents’ marriage, since her mother desires her happiness while her father is adamant that she cannot marry below her station. Indeed, her father has already promised her to a close friend and fellow officer.

The lovers have supportive friends: Julie her cousin Claire, who helps her arrange secret meetings, and St. Preux an English nobleman named Bomston (this was Rousseau’s idea of a name that sounded “English”!) who intercedes valiantly for his young friend and provides much encouragement and help. They are all thrilling and admirable characters.

To my surprise, the story carries on over the course of years. At this halfway point, it is 13 have passed since the lovers first met. I won’t spoil things by saying what has happened, but I have found the story turns to be fascinating and mostly unexpected. Rousseau is a very able writer, and I am studying his methods while I read.

And he was the first Romantic. Again in Cranston’s words:

And in Rousseau’s view, human behavior is governed by passion, not reason. And the self or personality who experiences that passion was an object of intense interest to Rousseau and to the later Romantics. It all echoes down in to that deep chasm known as the mystery of man.

So there is a glimpse of my current reading, and a couple of thoughts to go with it. I didn’t even get to what I really wanted to talk about! Maybe next time.

email
This entry was posted in thoughts and tagged Jean-Jacques Rousseau, Julie or the New Heloise, Maurice Cranston, reading, Romanticism. Bookmark the permalink.