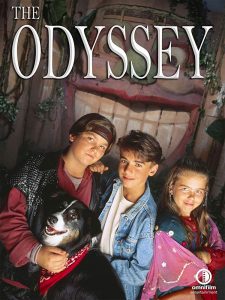 For better or for worse, the work for which I am still best known is The Odyssey, the fantasy TV series which I created and wrote with my writing partner and longtime friend Warren Easton. In it, an 11-year-old boy, Jay Ziegler, falls out of a treehouse and ends up in a coma, which somehow has transported him to an unsettling world where children rule because adults have never been heard of. The Odyssey starred Illya Woloshyn, Tony Sampson, and the late Ashleigh Aston Moore, and provided many other local kid actors, such as Ryan Reynolds, with their career starts. The show was produced here in Vancouver and initially aired by the Canadian Broadcasting Corporation, with 39 episodes appearing between 1992 and 1995.

In Canadian terms our show was a hit, with a peak audience of over 1 million viewers, and many more than that when you look at other countries. It was also a huge critical success, drawing praise for its intelligent, hard-hitting material aimed at kids without talking down to them. Many, perhaps most, of the show’s fans were adults, intrigued to find mythological, psychological, and political themes entwined in a kids’ adventure story. The series was a darling of festivals, winning awards such as a Top Ten World Program at the Cologne Conference—that is, selection as one of the 10 best TV shows ever made.

The Odyssey was a successful story, but the creation of the series, its writing and production, was a perilous ordeal for the inexperienced writers whose brainchild it was. In February 2008 I started to tell the story of its creation in a series of posts at my old blog, Genesis of a Historical Novel. I have decided to repost the series here on my new site for readers new and old. You’ll find a new episode here every Wednesday.

In 1987 I got away from scriptwriting. I was back at the Insurance Corporation; I became a Buddhist and took up meditation; Kimmie and I bought a townhouse together; and I was working on my New Age thriller novel, Truth of the Python.

I recall that Warren and I prepared more material for our would-be TV series Flash Dispatch, ideas for episodes for a first season, plus a description of how each episode would look and feel, and descriptions of the characters–material that in the TV world constitutes the “bible” of a series. Michael Chechik got the material in front of CBC drama executives in Vancouver, but their verdict was that the pilot script did not live up the potential in the accompanying material.

So there we sat.

But later that year, CBC headquarters in Toronto, no doubt responding to ongoing prodding and complaining by independent producers across the country, and making one of their occasional token efforts to give substance to their mandate to be a “national” broadcaster and not merely a Toronto broadcaster, came up with the idea of producing an anthology of one-off half-hour dramas from non-Toronto producers (that is, from “the regions”, in CBC-speak). The intent was to give producers in “the regions” a chance to get some experience in producing drama for the CBC, and, of course, to give voice to “regional” perspectives from across Canada. It will help Canadians learn more about each other! Just what the CBC is supposed to promote! Warm glows all round.

The anthology was to be called Family Pictures, and the theme was Canadian family life. CBC corporate ambassadors were sent out to meet with “regional” producers to explain the concept and give them documents describing what the network was looking for in the dramas. Michael was at the Vancouver meeting, and he called Warren and me up to suggest that we come up with an idea to pitch to the CBC. We said sure.

I came up with an idea. It was on 7 December 1987. I thought back to when I was in grade 7 at Brooksbank School here in North Vancouver, when I heard a rumor about a boy in another grade 7 class who had passed a love-note to a girl in the class, and the note had fallen into someone else’s hands and then been made public. I don’t know whether that actually happened, and I don’t recall the boy in question acting any differently than usual (strange in any case), but I thought: what if we wrote that story, and had our lover-boy feel, in his humiliation, that he can’t return to school ever again to face his peers?

When I pitched the idea to Warren he liked it right away; we knew it was a winner. And it was exactly the kind of thing we wanted to do: a comedy focused on kids. Thus was born the idea for “What’s Wrong with Neil?”: the story of a 12-year-old boy who passes a love-note to a girl in class, which is intercepted and read out loud by the class showoff, thus causing the boy to run home and pretend to be sick–so sick he could never go back to school…

We wrote up a couple of pages of material sketching the story and gave them to Michael. He sent them in to the CBC, and we waited.

A few months later (fast in TV-show-development time), probably early spring 1988, I got a call from Michael: the CBC liked our story and wanted to go to script.

Wahoo! I experienced the next big leap forward in “realness”: it wasn’t just a producer now who was interested in my work–it was a network, the people who would actually pay for it to be produced, and then broadcast it! Jubilation!

But I didn’t quit my job–not this time. This was only a one-off half-hour drama, and I had two mortgages now. Warren and I would have to write in our available off-job time, as when we’d written Flash Dispatch. But now we were not on conflicting shifts; I was on days and it would be a lot easier.

Michael held a meeting at Omni in which we met with Jana Veverka, the story editor contracted by the CBC to supervise the writing of the scripts for Family Pictures. (Later she’d go on to produce TV shows such as Bordertown and Airwolf.) As I recall, that first meeting was still in the Omni suite on the 11th floor of the Dominion Building. Jana was very positive about the story idea, and liked the fact that our hero was a nerdish love-sick 12-year-old. Her concern was that there might not be enough story there to fill a half-hour of TV.

“There’s plenty there,” we said. We saw some nice farce opportunities in the story.

There: we’d just had our first meeting with a network representative–our first “story meeting”. We were on our way.