Posted on 5 September 2018 by Paul Vitols 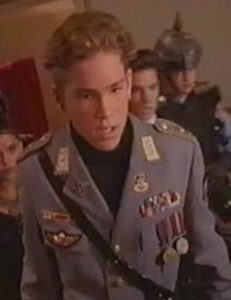 While “What’s Wrong with Neil?” was in production in early November 1988, Warren and I were bending our heads to the task of coming up with an idea for a viable TV series, so that we could provide ourselves with writing gigs on into the future. I mentioned in part 5 a walk we took through Grousewoods while the show was being filmed. I recall we also took one or more walks through my own neighborhood, down the mountainside from and east of Grousewoods. What kind of a TV series could we create?

We wanted to do a show about kids. We liked the innocent energy and comedic potential of kids, and felt that they are mainly poorly portrayed on TV, written condescendingly, either as cute moppets dutifully obedient to adults, or as precocious smart-asses who are really just adults in children’s bodies–more like the jesting midgets at the courts of medieval monarchs than like real kids. We knew we could do better than that, and had already proven it with “What’s Wrong with Neil?” It was obvious to us: most adults are not able to get into the mind of a child, to see the world again through a child’s eyes. They’ve forgotten. Children are almost always written from the outside; we were able to write them from the inside–and that gave us a big edge, surely.

How to get a show that focuses only on kids, without having annoying adults get in the way? How do you get kids on their own? At school? But school is so structured, and is run by adults. We thought back to when we were kids on summer vacations: long days spent among friends and neighboring kids–leaving the house in the morning, playing and adventuring through the day, then returning home for dinner at night. In all that time, you lived in a kid world, having kid adventures: riding bikes; collecting pop bottles to turn into candy-buying cash; getting into pine-cone fights with unfamiliar kids in the park; sneaking into public swimming-pools; speculating on mysteries like sex; exploring woods and ravines…

Yes! That would make a cool show: kids on vacation, having adventures with other kids, with never an adult in sight. They have their own society, their own politics, their own justice. They return to the “adult” world only at dinnertime, when they become subordinate members of the family once again, awaiting the next day and another tour of freedom.

But you can’t make a TV series out of kids on summer vacation. It’s too random; there’s no goal. It’s just kids playing and fooling around. And even in a show like that, you wouldn’t be able to exclude adults altogether–they’d have to be part of the action, even if only because we’d need to know about the family situation of each of our characters. The problem: how to have a world of kids without adults? We puzzled over it.

Meanwhile, “What’s Wrong with Neil?” wrapped: a very pleasant and successful shoot. A short time later a wrap party was thrown at the cinematographer Rob McLachlan’s house in North Vancouver. While I munched snacks from a table, I met a man I hadn’t seen before: a pleasant, softspoken guy with his face set in a faint smile. We introduced ourselves, and I learned that he was Michael Conway Baker, the composer hired to do the score for the show. When I told him I was one of the writers he made a point of complimenting me on the quality of the script.

“In my work I see a lot of scripts,” he said. “Very few are anywhere near the caliber of this one.”

“Thank you very much,” I said.

He said that the script was funny, but what he liked was that the story was so good.

Michael nodded emphatically. I was intrigued to learn that he was using “What’s Wrong with Neil?” as a teaching tool for his students in a course at UBC on film scoring. He told me he had screened the rough cut of the show for his class, and got them to write music for it. (Michael’s score for the show was very good; he’s one of the premier composers in Canada, and later on would do the music for The Odyssey.)

“In that opening sequence,” he said, “when the kid’s running home–” (After Neil’s love-note is read aloud to the other kids by his sadistic classmate, Neil runs from the school and sprints home “like he’s being chased by killer bees”, as we put it in the script.) “–they were writing this very romantic, Romeo-and-Juliet music.” He shook his head.

Michael had seen it quite differently: he’d written a tempestuous score there, a dramatic score–something more like the New World Symphony or “Ride of the Valkyries”. The music was expressing Neil’s feelings–his point of view, not our point of view, the audience’s. By treating the show as drama, he was liberating its comedic energy: making it funnier.

I was very pleased to meet Michael, and felt that he was a kindred spirit. It was excellent confirmation of our approach to writing.

As December 1988 drew in, “What’s Wrong with Neil?” was approved for broadcast by the network and slated to be aired in March 1989. Warren and I continued to tussle with the question of how to get a TV show populated only by kids.