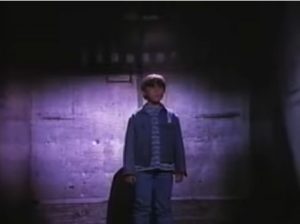 Warren and I knew we wanted to create a TV series about kids–showing their world without any adults. This was essentially what Charles Schulz achieved with his Peanuts comic-strip. You never saw an adult in Peanuts, at most only a child talking with an unseen and unheard teacher, or referring to a parent. But those situations were rare. Schulz’s universe was child-only, and this gave it much of its distinctive quality. Schulz dealt with universal and adult themes, but from an exclusively kid perspective.

We liked the idea of writing kid adventures from the kid point of view, of giving a kid adventure the feeling of bigness and importance it has for the kids involved. When adults are around, the kid world becomes small and immature.

We couldn’t think of a way to make this happen–until December 1988. I don’t remember exactly how the idea arose (Warren, if you’re out there, you might recall), but we hit on the notion of putting our kid-hero into a dream-world. In a dream, you can set the parameters any way you like: if you want to banish adults, then out they go. But how do you keep your kid only in a dream-world?

By having him always asleep.

By having him in a coma.

As soon as this idea cropped up we saw its potential. I don’t recall the exact place now–it might have been at the new suite of Omni-Films offices in a renovated warehouse on Water Street in Gastown, about four blocks from the old Dominion Building, where Warren and I used to meet for awhile after our respective day-jobs to work, nourishing ourselves with pastries I would bring from the Lonsdale Quay Market; or it might have been at Warren’s apartment on 4th Avenue near Alma–but I remember the rush of excited talk.

Our hero goes into a coma and finds himself in a world populated only by kids: he’s now in a permanent version of our summer-vacation reverie. But it’s much more powerful, because now we can introduce adventures and problems that you don’t face on your summer vacation–and there’s no home to return to at suppertime. Yeah: our guy finds himself in this new, strange world, and doesn’t know what’s happened, where he is. He wants to go home to supper–but doesn’t know where that is now, or how to get there. And of course, getting “home” will mean waking up from his coma! Yes! Of course! That gives our story another thing missing so far: a goal. Our story is about something now: our hero’s quest to find his home–which we in the audience will know means consciousness!

You could do so much with this. His friends from the waking world could appear here in unfamiliar forms–they could be his friends down here, too, only he wouldn’t realize that he knows them from waking life. And the “dream” nature of the show means we can bring in symbolic and mythical images or themes; we can bring in fear and horror–whatever we want! The “dream” lets us open the floodgates of imagination–we can really let loose!

Excitedly we talked. What would a kid-only world look like? How would it behave, if it were not only missing adults, but maybe were not even aware of adults–had not even heard of them? What if our hero were the only guy here who’s ever seen an adult? Yes! That makes him more distinctive, more special and weird in this other world. The kids down here would have their own politics, their own “institutions”, their own justice! We, the audience, would learn about it as our hero does, while he explores this strange place.

And meanwhile, in the waking world, our hero’s family and friends would be watching over him, trying to get him to wake up. Stimuli from that world might leak down to his dreamworld in transformed guise.

Yes, yes–it was a fantastic idea. Exciting! But as we talked about it over the coming days and weeks, I felt a certain pessimism set in.

“How can you do a show about someone in a coma?” I said. “What network will want that?”

Warren felt that was not a concern. After all, most of the show would be in the dreamworld, where our hero would be alive and well. Yes, I thought, but comas are a downer: they’re sad and depressing. We certainly wouldn’t want to treat the coma as something comedic; indeed, we’d want to treat it as realistically as possible. But the more realistic we are with the coma, the more dark and un-kidlike the show becomes. So I thought. I started to feel that the idea would be a tough sell, especially as a kids’ show.

Therefore, in those dark winter days of 1989, while Warren remained bullish on our boy-in-coma idea, my pessimism caused us to shelve it for the time being to try to come up with other ideas that might be more salable. Our mood was still up: “What’s Wrong with Neil?” was about to be broadcast–another milestone for us. I had just turned 30, and felt I had arrived at a career I had long wanted: to be making TV shows of my own.

Warren and I kept at it, meeting in the dim, deserted, and now stylish offices of the Omni-Films suite in the evenings, talking, writing, and still, I’m sure, sometimes laughing. Eager for a series of our own, we kept hammering away.