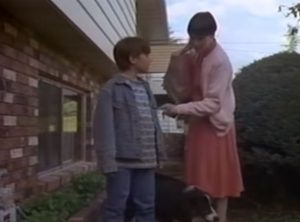 Television executives, for all their collective narcissism, arrogance, and power-lust, are actually hero-worshippers and groupies at heart.

Currently, here in Canada anyway, at least at the CBC, they worship a mythical hero called Show Runner. Show Runner is a writer-producer with the godlike power to make good TV drama happen, and above all to solve problems in the hurly-burly of producing episodes. Show Runner can write and fix scripts, and also respond to the needs of production. By applying supreme expertise both in writing and production, generating brilliant scripts while also barking orders at the production team, Show Runner squares the circle of Creativity vs. Business, saving network executives from the crippling anxiety of wondering what they’ll actually get after they’ve ordered episodes for a series. “How will we get out of this mess?” “Don’t worry–Show Runner will save us!”

The cult of Show Runner had not yet appeared in the early 1990s, when we were struggling to get our half-hour epic, The Jellybean Odyssey, produced. At that time, network hero-worship was more likely to be aimed at the cult of Director. Director was a hero who, like the later Show Runner, also made excellent TV episodes happen. He did this by applying his mysterious and unifying Vision to the script–a text which had already been perfected through network input. A Romantic figure, he led the TV production team through the alchemical process of transmuting the script into a Wonderful Episode.

For the pilot episode of The Jellybean Odyssey, the demigod Director chosen by the CBC was Jorge Montesi, a Chilean expatriate with a background in documentary filmmaking who had recently risen to semi-stardom directing episodes of serious TV drama for both American and Canadian networks. While the choice of director was notionally the province of the independent producer, Michael Chechik in our case, the CBC advocated strongly for Montesi, and made it clear that choosing someone else was going to be a tough sell. They liked Montesi, and wanted him to direct our pilot.

Michael, eager to please, said sure. In swept Jorge Montesi, who was indeed a Romantic figure, with his long dark hair, expensive leathers, and authentic Latin machismo. Bold, temperamental, and quick to confront, Jorge took hold of the production and set out to give it his stamp.

Personally, I liked the idea of a high-powered TV director making our origin episode. It expressed the seriousness of the network’s intention, for one thing. For another, I liked the idea that Jorge was not a “kid” director, but a maker of relatively hard-hitting adult crime drama for such flagship shows as Night Heat–a favorite of Warren’s and mine. That was all to the good.

But Jorge was a handful. He gave orders–he didn’t take them. To his great credit, he didn’t seek to make script changes. He liked the script and intended to film it. But that meant that he had to establish his presence stylistically–with the look of the show. I remember being part of the locations survey, a preliminary tour made of potential locations selected by the locations manager. One of the scenes we’d set in a lacrosse box. When we got to the lacrosse box chosen by the manager, Jorge was disgusted, and therefore angry.

“There’s nothing here to shoot!” he said. “It’s just a parking lot! It’s a crap location–get me somewhere else.”

This put him into a bad mood. He challenged many location choices in the script. He wanted to put Jay and his mother Val into a lovely heritage home (all these locations were in North Vancouver, close to where I live). Warren and I tried to protest that this wasn’t right–that the working-class widow would not have such fancy digs. Jay should have an ordinary house. But Jorge didn’t want to be shooting bland, featureless garbage.

The survey culminated at the old Versatile Pacific shipyard just down the hill from my house: a set of derelict industrial buildings dating back to World War 1, right on the waterfront.

“Why do they need a tree-fort?” said Jorge, who liked the postindustrial desolation of the site. “Why can’t they have their club in an old warehouse?”

“Jay’s a suburban kid,” I said, on the defensive and the unelected front-man for the original vision of our show, “not part of an inner-city street gang.”

“Why not?” he challenged me.

“Well,” I stammered, “that’s just the vision of the show. It would change everything to make him an urban street-kid. He’s not written that way. We’ve got the other episodes to consider. This is a series, after all.”

“Not yet it isn’t!” said Jorge, with a menacing look.

I was terrified that the show was going to be suddenly transformed into something entirely different, purely due to directorial whim. Later Michael would tell me that Jorge had been a political prisoner back in Chile.

“Yeah, he told me all this stuff,” said Michael, “that they’d tortured him–put electrodes on his testicles! I didn’t know what to say!”

But here at the locations survey, some other point of disagreement came up, and Jorge snapped. Maybe I’d suggested some way that something could be filmed, in order to get around some perceived problem. Jorge turned on me.

“Don’t tell me how to direct! I’m responsible for this show! My name’s going on this thing!”

He had his finger in my face. Michael and the locations manager looked on in embarrassed silence. I didn’t say anything–it would only have been a sarcastic remark, in any case. I’d created this show and had worked on it for two years; he was a hired gun who’d been on it a week.

I left and walked up the hill to my house. I crawled up to my bed, lay down, and wished I’d never heard of television.