Posted on 8 December 2018 by Paul Vitols

In the first 5 parts of this series we looked at the early stages of the process of creating a fictional character, which got us to combining a few archetypes to form the nucleus or chassis of the character. Now what do we do?

One thing to bear in mind is that no part of the story-creation process can be done altogether independently of the other parts. The story, a work of art, is a whole, and its various parts must all change and adapt together in order to realize the fulfillment of the whole work. If you change your plot, then you must also change one or more of your characters, even if only slightly. And if you change your theme or the controlling idea of the work, then that will imply big changes to plot and character–and everything else.

Similarly, when doing the initial creation and shaping of characters, it must be done with the aims of the whole work in mind. A character is not created in a vacuum, but right from the start has a mission to fulfill in the story; every character has a purpose, and needs to be designed in order to best fulfill that purpose.

An important point is whether a character is going to undergo change in the course of the story. Character change is always a key part of the theme of a story; it is through showing the change in a character that an author makes his strongest and most emphatic points, at least at the moral level of a story, which is the level most important to a story’s artistic success. 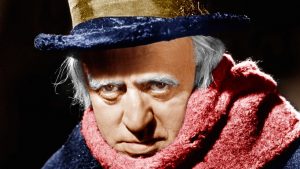 “I don’t deserve to be this happy.”

Consider A Christmas Carol by Charles Dickens. Ebenezer Scrooge, the dour, callous, solitary miser, undergoes one of the most profound and memorable changes of any character in literary history, turning into a generous, affectionate, and joyful man. It’s a mark of Dickens’s genius that he makes such a vast change believable. By having recourse to the supernatural–by having Scrooge visited by ghosts–he is also able to bring about the change in a single night: Christmas Eve. We see how Scrooge’s unhealed wounds from youth have turned him into the hard man he is, and we see how Scrooge’s late partner Jacob Marley and the three ghosts of Christmas administer the tough love that Scrooge needs in order to see the light–and not just see it but become it by changing his behavior and his life. The three ghosts skillfully work Scrooge’s character, adjusting it the way a chiropractor adjusts the alignment of your joints. They put him through the wringer and scare him to death.

A Christmas Carol is an example of positive character change. In general this is the pattern of comedy in the widest sense: stories that have happy endings. The opposite is tragedy: stories in which the main character changes for the worse. Here an example is Macbeth by Shakespeare: a Scottish noble, driven by ambition, murders his king in order to gain his crown, and he finds that in order to hold it he must double down and keep killing–and it doesn’t end well for him. A more recent one is the TV series Breaking Bad, which might also be called The Tragedy of Walter White.

A third pattern is one in which the main character does not himself change, but he brings about change in the characters around him. An example of this was the 1936 movie Mr. Deeds Goes to Town starring Gary Cooper and Jean Arthur, which I watched last weekend. Deeds, played by Cooper, is a decent, sensible, and eccentric small-town man who is whisked off to New York when he inherits a large fortune from a distant uncle. There he becomes a laughing stock among the cynical socialites, but those who are closest to him, such as the reporter (Arthur) who inveigles her way into his life and his streetwise personal assistant, find themselves first touched and then changed by Deeds’ integrity. A more recent example is Beverly Hills Cop, the 1984 movie in which Eddie Murphy, an irreverent maverick cop from Detroit, transforms his straitlaced California colleagues into more relaxed versions of themselves. A still more recent example is the 1994 movie Forrest Gump.

In storytelling, character change is known technically as the character arc, and the 3 kinds of change stories outlined here are known as positive-change, negative-change, and flat arcs. While good stories can be created that do not feature any kind of character change, stories that do feature character change tend to be the best and the most powerful. Creating characters who change, therefore, is an advanced technique used by storytellers who want to develop the best possible stories.

As for what kind of character arc to create, that depends on the view of the world that you want to present. The basic view underlying the positive-change arc is that virtue leads to happiness, with the specifics of which virtue and what kind of happiness being determined by the needs of your story and what you want to say. Broadly, this is the story plan of comedy: stories that have happy endings.

The negative-change arc, on the other hand, the arc of tragedy, shows how vice leads to misery or disaster. Just as comedies are inspirational tales, showing the audience how to live, tragedies are cautionary tales, showing the dangers of the dark side. Both are valuable, edifying, and emotionally satisfying for an audience if done well. Some writers, such as Shakespeare, are adept at both. Others prefer to stick to one form.

The flat-arc story lends itself to comedy, although there may be tragic stories in which a main character corrupts others around him without undergoing change himself (I can’t think of one offhand). In general I would say that if you reverse the polarity of these arcs, that is, show that virtue leads to misery or vice to happiness, then I would say you are writing a black comedy. I had not thought of this before, but I think this may be a good definition of black comedy: a story in which the consequences of moral actions are inverted. And if that’s your view of the world, then you should by all means write one.

This choice, of what kind of arc you intend to present, has big consequences for the way you choose and design your characters. Characters who change need a certain complexity, for some aspects of them change while others do not. You as a writer need to know what those are. And you need to design a situation that will bring about the desired change.

There’s lots to do. We’ll pick it up there next time.

In the meantime, take a look at my Creating Characters reading list (one of a growing collection). If you haven’t already done so, now would be a good time to catch up on parts 1 – 5 in this series.

Enjoyed this post? Help me create more by becoming one of my Patreon patrons. If you’d like to support my work without spending money, I have just the page for you.