Posted on 5 December 2018 by Paul Vitols 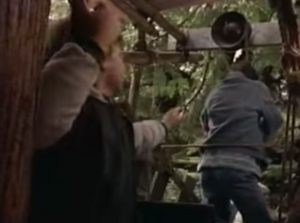 Despite some bumps and anxieties along the path of preparing to produce the pilot of our would-be adventure-fantasy series The Jellybean Odyssey, things progressed quite well and soon, sometime in summer 1991 (August, I think), filming actually began.

The director, Jorge Montesi, though temperamental and hotheaded, knew what he was doing and took pains to get the show looking and feeling a certain way. Indeed, it was because he cared so much about the product that he was sometimes difficult for people like me–that is, those who did not actually report to him, but had more of a “staff” relationship with him–to deal with. After all, if someone who reports to you disagrees with you, it’s easy to resolve: “do as I say–now.”

Jorge was proficient, effective, and creative. The crew was also very skilled and enthusiastic. Often we heard that people loved the show idea and the script, and they went out of their way to give it their all.

Warren and I were pleased and relieved that the tree-fort-in-the-ravine idea that we’d written would be filmed after all. Indeed, the locations manager had found a perfect ravine in a park in nearby Lynn Valley–exactly what we’d had in mind when we wrote the script. The park authorities allowed the crew to build a tree-fort in a tree there–as long as they didn’t use any nails, screws, or other fasteners that penetrated the bark of the trees! They ingeniously came up with a sophisticated tree-fort high above the ground, all made with non-penetrating bindings.

One sign that Jorge was serious about shooting the script as written was the fact that he actually used a crane-shot that Warren and I had written in (scriptwriting texts tell you not to put camera angles and such in scripts, on the grounds that that is “directing on paper”). But we felt this had a clear story purpose: a crane-shot going up the tree to the tree-fort, to show how high it was. Thus we hear the dialogue of the boys in the fort before we finally see them–after we, the audience, have “climbed” the tree to get there.

I think they could not get a real crane into the ravine, so the crew rigged a bosun’s chair on a pulley hanging from high up, and they pulled the cameraman, Trig Singer, up by a rope while he did a handheld shot on the way up. Scary–but he seemed completely calm. The boys had to be cued to get into motion at a certain point, moving along the homemade catwalks high above the ravine floor. It took a few takes. I was delighted that the crane-shot went in, and felt that it was a sign that our show was going to be special.

Another big item in the pilot was the fall itself. The show’s stunt coordinator was the veteran Vancouver stuntman Bill Ferguson. The fall would be done by his own son, who was about 11 years old himself. I watched Ferguson and his team prepare the stunt–they were there for hours while main-unit filming was being done elsewhere. Ferguson’s team prepared a large collapsible cushion beneath the tree-fort, I don’t remember the materials used now. I do remember that they prepared the stunt with great care. When time to film came, they had at least three cameras running on it. I was impressed by the courage of the young Ferguson, and by the concerned and close-knit teamwork of the stunt crew. It went well, and we spectators burst into applause.

Another exciting part of filming was the hospital scenes of the upworld, when the unconscious Jay is taken to emergency. For this, a real intensive care unit (ICU) was used at Eagle Ridge Hospital outside Vancouver. Sadly, this newly built hospital had never had enough funding to be able to actually operate its state-of-the-art ICU; it had only ever been used as a film set! So the location was real, and those were real nurses moonlighting as actors who whisk Jay into his bed for treatment.

As a writer, it’s very gratifying to be on the set when your script is being produced (at least, it usually is, in my experience). You’ve done your part already; you’ve suffered and sweated. Now others have to do their bit, and they stride around with colored copies of your script, all marked up with their own technical notes. The actors carry “sides”–miniaturized pages of script, each actor only with the pages containing his or her lines. I ate the snacks, chatted with Michael, who was also more or less an onlooker at this point, and generally enjoyed the status of being an “above-the-line” member of the production–that is, one of the main creative positions, as opposed to the technical and craft positions that constitute most of a film crew.

Filming was going very well. But there was a dark cloud on the horizon. There was a controversial scene in our script, which our local network executive David Pears had decided he didn’t want in the show.

But that’s for next time.