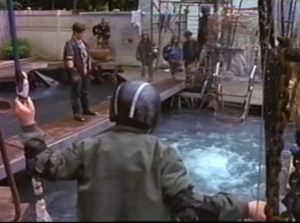 In part 19 I left off talking about the production in summer 1991 of the pilot episode of the series we were calling The Jellybean Odyssey. It was going well, but a nagging problem was coming to a head: the local CBC executive charged with supervising our show, David Pears, wanted a certain scene from the script removed.

In those early days, Warren and I, still ignorant of the filmmaking convention that has a script’s scenes numbered only when it is budgeted by the production department, had numbered the pilot’s scenes ourselves. The conflict was arising over the scene numbered 49: a scene in the climax of the show in which Jay, undergoing a medical crisis of elevated intracranial pressure that could quickly kill him, has a strange, intermediate-world experience. In the downworld of his coma-fantasy, he has just been dumped into a swimming-pool by the young thugs who have taken him captive. As the pool foams strangely and Jay remains submerged, he suddenly finds himself emerging from a different pool in a strange space–one in which his mother Val is standing nearby. In a calm, surreal exchange, she begs him to come home, and he calmly tells her that he cannot–he has to retrieve his dad’s telescope. With that, he plunges back into the water, to be pulled out of the swimming-pool back in the downworld, and saved from immediate death in the upworld.

Just about everyone liked scene 49. Warren and I, the writers, certainly liked it. Michael Chechik, the producer, liked it. Jorge Montesi, the director, liked it. The only one who didn’t like it was Pears–and he made it clear that it had to come out.

Michael, in his nice, accommodating way, kept trying different ways to cajole Pears into accepting scene 49, all to no avail. Pears warned him not to waste budget filming that scene, because it was not going to wind up in the finished show.

So, with the show in production and scenes actually being filmed, the argument was coming to a head.

One morning we were to have a supposedly decisive meeting on it right in the suite of CBC rooms being used as the production office for the show. Pears wanted to put the scene behind us once and for all.

Just before the meeting I decided to prepare a presentation. I went to the art department to beg a sheet of chart-paper and a felt marker, and drew a decision-table, using some of my business-analytical skills cultivated in my work at ICBC. I listed the positive and negative features of scene 49 in a kind of cost-benefit analysis of using the scene in the show. Armed with my chart, I went into the meeting, held in a tiny little office, and, pinning it to the wall, made my pitch for scene 49.

I took each of the reasons that Pears had given for why the scene should be cut and countered them with positive reasons why it should stay. Pears thought the scene would be confusing for the audience–they wouldn’t understand what was going on. And he thought, most of all, that it “blew the tension” of the whole series–that it short-circuited the goal of the series by having Jay come into contact with his mother. Now it would seem that they had a secret deal or understanding that they were both complicit in his being unconscious.

I argued that the tension was not “blown” at all; the “meeting” of boy and mother was happening in some unconscious, emotional realm in which they simply expressed their connection and love for each other; it was a spiritual scene, with a weird, symbolic setting to emphasize the fact. The kid audience would in no way be confused by it; they would understand immediately that this scene was happening in a special space relating to the life/death urgency of Jay’s situation. Scene 49 did not ruin our show–it made our show!

As I made my pitch, I noted that Pears enjoyed the presentation. He seemed to like the creativity of using an analytical chart to sell the scene, and liked being the audience of such a pitch. He smiled. But it was to no avail. Scene 49 blew the tension of the whole series, and would have to go.

Pears’s words to Michael: “Pay me now or pay me later–it’s not going in.”

We on the production side just couldn’t accept this. My fear was that in the press of production, scene 49 might become a “luxury” scene that, if we ran short of time or money, would not get filmed. But Jorge had made up his mind on it.

“I don’t care what they say,” he said. “I’m shooting that scene and I’m cutting it in.”

Just to be sure, I showed up to watch the filming of it. Scene 49 was scheduled with other scenes shot down at the abandoned Versatile Pacific shipyard a short walk from my house. When I went on the set, they’d constructed a special pool in a dilapidated, World War 1-era fabrication building. The effects people pumped the space full of mist, and Jorge shot a very powerful and poetic scene. He understood the scene perfectly and nailed it on film. They did two or three takes of Illya Woloshyn emerging from the still pool, each time with crew on hand to immediately fish him out, towel him dry, and blanket him warmly. The scene ended up with Val, played by Janet Hodgkinson, standing on an old staircase, repeating her last words to Jay before he went into the ravine and fell: “Watch out for weirdos.”

When I saw the scene on film I knew it was dynamite. To cut this scene out of the show would be an instance of the worst kind of network interference–a deliberate step toward making an extraordinary show mediocre. It was the climax of the climax–the heart of our show! Imagine wanting to cut it out!

As was customary, Jorge supervised the first edit of the show, and put in scene 49. Would the network really make us rip it out?

In the event, talk about cutting out scene 49 subsided. We, the filmmakers, didn’t bring it up, and neither, anymore, did the network. I suspect that what happened was that Angela Bruce and the executives in Toronto liked the scene, and overruled Pears. I was just thankful that we’d got it on film.

The film looked great over all: imaginative and filled with “edge”. Jorge had brought a nice, adult-network look to our kids’ show. The next problem was getting it edited into a workable story.

One Response to The Odyssey odyssey, part 20