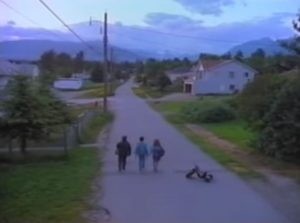 The effort to make the best possible pilot episode had the crew working long hours and pushing the envelope every day. I remember that on the last day of filming they ran out of time and had to find a substitute location for what was also the last scene in the script: when Jay has been saved from drowning in the downworld swimming pool and has re-befriended his waking-life companions Keith and Donna in the guise of Flash and Alpha. He’s got his telescope back, and he’s got to get it to his father and get himself home. The three heroes set out down the road to adventure.

Filming here in North Vancouver, the crew needed somewhere nearby. The locations manager came up with the idea of filming the last shot on the Burrard First Nations reserve, a short way along the waterfront from the old Versatile Pacific shipyard. He got permission from the band, and there they went with a crane to shoot the final shot of the pilot: craning up as the three kids walk down a road that is suburban and familiar, and yet also different and hard to place. The set people put an abandoned tricycle and maybe one or two other toys on the road to add a slightly forlorn and mysterious touch. It worked perfectly, I thought.

Yahoo! Our show was in the can! On time and, well, probably not on budget–but not ridiculously overbudget, as it would be if extra filming days had to be added. (I worked on a movie once in the 1980s whose first assistant director at the end of each shooting day would raise his two hands with thumbs and forefingers touching to symbolize zeros, and declare, “oh and oh–zero days ahead, zero days behind”–meaning the show was on schedule, the state he desired.)

We had not only survived the rigors of working with the hot-tempered director Jorge Montesi–he had delivered an excellent piece of film. Because he was in such demand, I don’t think he was even able to supervise a full cut of the episode beyond a rough cut before he had to leave for his next gig. But the scenes he had already put together were terrific, we thought. I remember saying goodbye to Jorge at the Omni-Film offices.

“Don’t use that word,” said Jorge, abashed but clearly pleased. (I’d managed to embarrass Jorge Montesi!) “It was an excellent script.”

With that he was gone. Getting the show ready to broadcast would be the task of Michael Chechik and the postproduction team. And it turned out that the adventure of getting our show made was not yet over.

2 Responses to The Odyssey odyssey, part 21