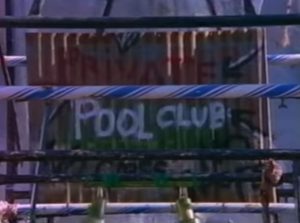 With our pilot episode rescued by the expert film editing of Jana Fritsch, the rest of the postproduction elements fell into place during the fall of 1991 and the show was finished. Our producer Michael Chechik engaged North Vancouver composer Michael Conway Baker to score the film (he had also scored our first production, “What’s Wrong with Neil?”).

I don’t recall exactly where or when I saw the finished product, a videocassette of the edited, scored, sound-mixed show ready for broadcast. It was probably in the conference room of the Omni-Films suite in Gastown, and it was probably with my cowriter Warren. But I do recall my reaction:

Michael Conway Baker’s music added another dimension to the production. I remember watching act 3, in which Jay is suspended over the swimming pool in a modified shopping cart, being interrogated by Flash, bully leader of the self-styled “swimming-pool club”. An argument breaks out between Flash and his number-two man over whether to dunk Jay in the pool or not. Michael had put in a kind of percussion cue, like bamboo drumming on skulls or something, that gave it a primal, Lord of the Flies-ish quality. Meanwhile, Jorge Montesi, the director, had given the scene exactly the same kind of edge and menace he would have given to a late-night adult crime drama. The result was hair-raising–it was fantastic. We had taken kids’ television to a new place, created a new kind of show–and here was the proof unspooling right in front of our eyes.

As the final shot craned up over the deserted, toy-littered road of the Burrard Indian Reserve, and the three reconnected friends Jay, Flash, and Alpha set off to seek Jay’s father and home, with Michael’s major chords suggesting a new, hopeful beginning, I felt sure beyond any doubt that we had a winner. Warren agreed. We were amazed and of course proud that something we had written had been turned into a show so good.

It had imperfections, of course, but that’s inevitable. In the main, the story takes off, grabs the audience, and doesn’t let go. (A year later, our story editor in development, Hart Hanson, who was now also a professor of creative writing at UBC, invited Warren and me to talk to his screenwriting class. To the best of our ability we answered questions about writing and dealing with story editors and the network. Then Hart put in the videocassette we’d brought to show people act 1 of the pilot. When act 1 was finished the class was over and Hart went to switch off the TV, but his class, glued to the set, waved him away–they wanted to keep watching.)

Even David Pears, our local CBC exec, was happy. No grousing about the infamous scene 49 now. After screening the pilot for himself he was able to say with an enthusiastic smile: “It’s a 23-minute feature film!”

And the network in Toronto? I believe they were happy with the pilot. They were probably expressing worries about whether the show was “kid” enough–whether kids would be able to follow the jumps between different worlds. This had been a big concern of theirs all through development, and the occasion of much tweaking and rejigging of minor points for Warren and me–work we found to be needless fussing with irrelevancies.

I decided to do a little market test of my own. My stepdaughter Robin, age 10, was in grade 5 at the time–right in our target audience range. I asked her teacher, Mr. Wiet, whether I might screen our pilot for the class to get their response. He welcomed the idea and we set up a date.

So one wintry day I went up to Ridgeway Elementary School a few blocks away with my videocassette, and after a brief introduction by Mr. Wiet, I turned over my cassette, the lights were dimmed, and the kids watched the show.

They were spellbound. Apart from giggling at a couple of the humorous moments, they watched silent and rapt. The only disturbance was caused by the audiovisual-nerd kid in charge of the remote. Because he wouldn’t stop playing with the remote, he stopped or paused the episode a few times while the show was going. His classmates and teacher were remarkably tolerant of his fooling around; I wanted to slap him in the head. As I expected, there were no comprehension problems, there was no puzzlement in the audience. They knew perfectly well what was going on every moment. Indeed, some kids were muttering things like, “he’s in a dream–why not just imagine a gun or something?”

Afterwards I answered a few questions, but soon I was walking away again with my cassette. I felt perfectly confident that I was carrying a hit show in my hands.