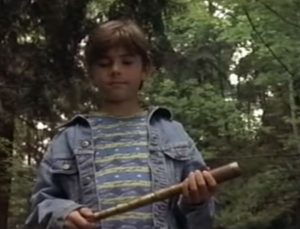 Fall 1991. The pilot episode of The Jellybean Odyssey was produced and ready. The network, though officially never forthcoming with praise (well, except for their own ideas), seemed pleased with it and certainly intended to broadcast it, but not for several months.

This was alarming. Why? For one thing, if the network intended to await the ratings of the broadcast pilot before making a decision to pick up more episodes, then we’d be looking ahead to another year before we could start making–or even writing–new shows. This was bad for two reasons.

One was that our stars were 11-year-olds, growing fast. Every extra month that slipped by without making more episodes allowed them to grow visibly older. If the network really dawdled before deciding to order more episodes, Jay would have sprouted several inches and had his voice change between the pilot and episode 2. The network never showed the least sign of caring about this factor. We knew that if it came down to it, the network might wait two years, order more episodes, then, when told the kids had grown to adult size in the meantime, shrug and move on to some other show.

Another problem with delay was financial. Warren, who was trained as a cook, could get “disposable” jobs readily enough. He was also single and lived (wisely) in humble rental accommodation. I was married and carrying two mortgages plus a personal loan, much of this debt at a high rate of interest. Kimmie was working full-time, but I had quit my job in September 1989, and two years later had exhausted all my savings. I had written a story treatment for my would-be kids’ feature film, My Dad the Butler, but the Foundation to Underwrite New Drama had opted not to fund a first draft, closing off that possible revenue source. I was still earning $150 a week for writing reader’s reports on other writers’ unsolicited script submissions to CBC Drama in Vancouver, but this was nothing like the income I needed if I were to meet my obligations.

Meanwhile, Warren and I, to survive, had drawn advances from Michael Chechik against future work on the show, and had tapped that well as far as we could. To keep my living situation going I juggled, I scrimped, I borrowed. As worries piled up, I would think back to my interview with Sarah Scott Simonson, the psychic I had consulted in 1990. She predicted that I would undergo such a period of financial juggling and dodging, but that it would end well, with my TV show being picked up and revenue coming in. She had counseled me to keep juggling and not to give up.

I didn’t plan to give up, not unless I absolutely had to. But in the meantime the uncertainty was creating stress in my marriage. Kimmie was increasingly worried that we were going to lose our house, and all I could offer in response were faith-based assurances that it wouldn’t happen–I wouldn’t let it happen. And I wouldn’t: if it came to the crunch, I’d get out there and start delivering pizzas or doing whatever it took. But neither of us had ever taken on such large financial obligations before, and Kimmie was a worrier by nature. She was doing her bit, but by itself it wasn’t enough. I had to contribute. Sometimes the tension was too much and we fought. I had faith in the project, but it was a tense time, much of which I spent with my gut in some kind of knot, and lying awake at night.

Week after week dragged by. The CBC was silent as the Sphinx. Michael Chechik at some point asked CBC’s head of programming, Ivan Fecan, about how things looked for an episode order, and Fecan responded, “If you want an answer now, the answer’s no”–his way of pushing back against being rushed.

Week after week. October. November. We’d hear rumors of network movement. The new budget year was coming; they’d have to sort out their spending for the coming seasons. Surely soon we’d hear…

Maybe they were going to wait till after the pilot was broadcast after all, effectively turning out would-be groundbreaking TV series into a one-off half-hour, like “What’s Wrong with Neil?” All because we were new and untested and unimportant compared to their flagship efforts, like Street Legal. We’d made a good half-hour, but we were small fry, newbies, unknown. We didn’t matter.

Offhand I’m not sure of the exact day, but it was probably Friday 6 December (not Friday the 13th–surely I would have remembered that!) that I got a phone call from Michael Chechik in the afternoon. He excitedly reported that he’d heard from the network, and they had ordered the rest of the scripts for season 1 of The Jellybean Odyssey to be written.

Yes!! This wasn’t an actual order for episodes to be produced–but from the writer’s standpoint it was the next-best thing, since it meant more work and more income. Also, even though buying scripts was relatively cheap for the network, they wouldn’t be doing it unless they had a good idea that they were planning to go ahead and order season 1. In short: it was the best news possible.

I immediately passed the news on to Kimmie and Warren. And Kimmie and I decided to meet for a celebratory drink when she’d finished work. We met at Sailor Hagar’s, a neighborhood pub close to ICBC head office (Warren may have been there too–sorry Warren, don’t quite recall). In the standing-room-only bustle of the Friday afternoon, end-of-week celebration, Kimmie and I drank a pint and savored the exultation and relief of having survived a kind of desert crossing together.

Something I had long wanted had now actually, that day, come to pass: I was a guy with a TV series. We were giddy with excitement and happiness. Never before–or since–had I felt that I’d so thoroughly earned a celebratory pint of beer. What a relief.