my reading list and how it gets that way

Posted on 9 November 2019 by Paul Vitols

Right now I’m reading Uncle Tom’s Cabin by Harriet Beecher Stowe. I’ve borrowed the Norton Critical Edition from the North Vancouver District Public Library (the only edition that was on the shelves when I went looking), and I’ve made it to page 60. So far, I must say, I’m surprised at how much I’m enjoying it: an overtly didactic work published in 1952—how good could it be? Rather good!

But if I didn’t expect to enjoy it, how did I end up reading it? you might ask. Well, it was on my reading list. But how did it get there? Now things get foggy. I had long been aware of it and knew it was a classic novel, and something in particular must have prompted me to add it to my list a couple of years ago. It will have been in 2017, for I added it not long after I added A Man Called Ove, which was in June 2017, since I remember the occasion on which I added that. Most likely I read a reference to it somewhere that jogged my memory, or, just as possibly, it was an answer on Jeopardy! that prompted me to think, “Oh yeah—I’ve always wanted to read that.” Out with the iPhone, and I typed the title and author in a Note labeled, simply, “Books.” Looking at the list now, there I see it, sandwiched between The Book of the Courtier by Baldesar Castiglione and a book called Description by one Monica Wood, which I have yet to acquire or read.

I got my iPhone 5S in November 2014: my first smartphone and indeed my first cellphone. Noticing the Notes app that came preinstalled, I got the idea of creating a reading list for myself—something I had never created in the world of paper and ink. My very first entry says simply “Penelope Fitzgerald”: no title attached. I recall too how this entry got there. I had read an article about Penelope Fitzgerald, possibly in The Times Literary Supplement, and was interested in her because of her late-starting career and the seeming literary depth of her writing. I no longer had the Supplement and could not remember any of her books’ titles, but I remembered Penelope Fitzgerald, and so, casting around my mind for something to start my official reading list with, I picked her name and typed it in. List started! 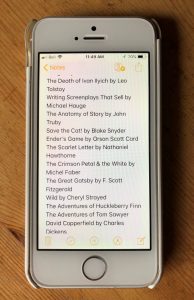 An iPhone making itself useful

(I did go on to read a couple of books by Penelope Fitzgerald, and enjoyed them quite well—but that’s another subject.)

The next entry was Augustus by Adrian Goldsworthy, a highly readable and prolific author of ancient history. This book I still don’t have. I will have been encouraged to add it because of how much I enjoyed Goldsworthy’s Caesar, which I acquired in 2008; but as for what specifically prompted me to add this one, I don’t recall. Possibly it was referenced in another book, and I typed it in.

There are different paths to my reading list: reviews, references in other books, the results of Amazon searches, even the odd personal recommendation, as in the case of A Man Called Ove. I thought it might be fun to look at some more recent additions whose provenance I do remember.

Let’s start at the end: the most recent addition:

The Stages of Higher Knowledge by Rudolf Steiner

This one I added this morning while typing notes from last night’s reading period. I had just started Steiner’s book How to Know Higher Worlds, first published in 1909, and in his preface he mentions a succeeding work that would be a continuation of his discourse. I highlighted the title while I was reading, then, this morning, as I was typing the highlights into a Word document, I paused to add this work to my iPhone reading list. So this was a reference from a book I’m currently reading.

The item that precedes it is:

The Book of the New Sun by Gene Wolfe

This too is an entry I made this morning. It’s unusual for me to make 2 entries on the same day, although not unprecedented. Usually days or weeks go by without my adding to the list. But if something grabs my attention, I add it. This book came from an answer on Quora. The question was “Why do some people believe that Dune is the greatest sci-fi novel ever written?” and it showed up in the Quora Digest e-mail that I get each day. The top answer was by one Eric Van, someone who plans sci-fi conferences. He takes a good stab at surmising why some people regard Dune as the greatest, but he notes in a postscript that his own pick for greatest sci-fi novel—something which he distinguishes from best sci-fi novel—is the above-named work. Intrigued by this knowledgeable recommendation, I hastened to add it to my reading list.

Plot vs. Character by Jeff Gerke

This was another reference from a book, specifically Creating Character Arcs by K. M. Weiland. Lately I’ve been putting intense (for me) effort into sorting out the plot of my epic, The Age of Pisces, and in the course of doing this I have been reviewing the various texts in my library on the art of structuring stories. Weiland’s is one of these—a very good one—and her quoting Gerke’s work in a couple of places made me curious to see more of his book. On the list it went.

So there you have it: a snapshot of my reading list. I’ll never read them all, but neither are they consigned to oblivion. If ever I want to decide what to read next, the answer is right at my hip.