Posted on 6 December 2019 by Paul Vitols

The two recently read novels I look at today, Medicine Walk by Richard Wagamese and The Hitchhiker’s Guide to the Galaxy by Douglas Adams, are, in many ways, like night and day. The two works do have some similarities: they are both relatively short and written in lean, minimalist prose; they both, as the title of this post suggests, are accounts of adventurous journeys. Also, the authors were men who died at relatively young ages, Wagamese in 2017 at age 61, and Adams in 2001 at age 49. And, in a certain way, both novels are the products of suffering: Wagamese writes from a well of firsthand knowledge of the pain and injustices borne by aboriginals in Canada, while Adams, like many another comedian, grappled with depression throughout his life. 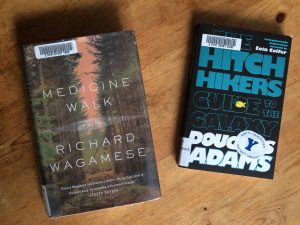 Men on the move

Despite these parallels, it would be hard to find two books that differ so much in outlook and mission as these two. Wagamese, a half-breed Indian who lived in the city of Kamloops in the interior of my own home province of British Columbia, writes with great depth of feeling and knowledge about the backcountry of B.C. It seems clear that his protagonist, 16-year-old Franklin Starlight, gets his own love of that world from his creator. There is a strong sense here of the power of nature to heal, and nature has her work cut out in this case, for Franklin finds himself suddenly taking on an unwelcome burden: to take his sick, estranged father Eldon deep into the woods so that he can die and be buried there. A life of alcoholism and dissipation have killed the still young Eldon—or, more likely, the wounds that led to that feckless life are finally proving fatal. Although Eldon knows nothing about Indian traditions, his journey into the woods, guided by his son, for death and burial, is the “medicine walk” of the title. A past surfaces, filled with pain,  guilt, and remorse.

Adams, for his part, makes light of the conception, birth, and career of the franchise he created with The Hitchhiker’s Guide to the Galaxy. Like the story itself, he portrays it as a series of serendipitous events, chance encounters, and flukes. As a science-fiction-loving backpacking youth in Europe, he hit on the idea of a hitchhiker’s guide for traveling the galaxy, and some years later turned this idea into a series of radio sketches for the BBC. It quickly found an audience, and Adams, a hitherto marginal and struggling writer, had discovered his magnum opus.

I like to compare novel openings, so let’s do that. Starting with Medicine Walk, here’s the beginning of chapter 1:

He walked the old mare out of the pen and led her to the gate that opened out into the field. There was a frost from the night before, and they left tracks behind them. He looped the rope around the middle rail of the fence and turned to walk back to the barn for the blanket and saddle. The tracks looked like inkblots in the seeping melt, and he stood for a moment and tried to imagine the scenes they held. He wasn’t much of a dreamer though he liked to play at it now and then. But he could only see the limp grass and mud of the field and he shook his head at the folly and crossed the pen and strode through the open black maw of the barn door.

The old man was there milking the cow and he turned his head when he heard him and squirted a stream of milk from the teat.

“Get ya some breakfast,” he said.

“Better straight from the tit.”

The old man cackled and went back to the milking. The kid stood a while and watched and when the old man started to whistle he knew there’d be no more talk so he walked to the tack room. There was the smell of leather, liniment, the dry dust air of feed, and the low stink of mould and manure. He heaved a deep breath of it into him then yanked the saddle off the rack and threw it up on his shoulder and grabbed the blanket from the hook by the door. He turned into the corridor and the old man was there with the milk bucket in his hand.

The prose is clean, plain, and vivid. The farmstead comes alive with sensory details and a couple of striking metaphors: the “inkblots” of the footsteps in the frost, the “black maw of the barn door.” There is a certain sense of mystery, perhaps a fairy-tale quality, evoked by the fact that the characters are not named; so far they are only a “kid” and an “old man.” This raises the question of their relationship, which is clearly familiar and close without, seemingly, being in the nature of a family tie. It also suggests a missing element: the adult man who naturally stands between the kid and the old man. The story will show that this man—the kid’s father—is missing indeed, and this absence lies at the crux of the story. And the relationship between the kid and the old man is a mystery which will the story will only gradually resolve.

Speaking for myself, I found the opening of the novel intriguing and inviting; I wanted to read on.

Let’s compare it now with the opening of The Hitchhiker’s Guide to the Galaxy. This edition of the book included a preface by the author, then the book proper begins with a 2-page prologue. I’ll skip those and present the first part of chapter 1, where the story begins:

The house stood on a slight rise just on the edge of the village. It stood on its own and looked out over a broad spread of West Country farmland. Not a remarkable house by any means—it was about thirty years old, squattish, squarish, made of brick, and had four windows set in the front of a size and proportion which more or less exactly failed to please the eye.

The only person for whom the house was in any way special was Arthur Dent, and that was only because it happened to be the one he lived in. He had lived in it for about three years, ever since he had moved out of London because it made him nervous and irritable. He was about thirty as well, tall, dark haired and never quite at ease with himself. The thing that used to worry him most was the fact that people always used to ask him what he was looking so worried about. He worked in local radio, which he always used to tell his friends was a lot more interesting than they probably thought. It was, too—most of his friends worked in advertising.

On Wednesday night it had rained very heavily, the lane was wet and muddy, but the Thursday morning sun was bright and clear as it shone on Arthur Dent’s house for what was to be the last time.

It hadn’t properly registered yet with Arthur that the council wanted to knock it down and build a bypass instead.

Here too the prose is lean and clear. Unlike the opening to Medicine Walk, here there is no figurative language to speak of, but we do have a narrator who is ironic and funny. We are introduced to the principal character (we won’t really be able to call him a hero), Arthur Dent, an ill-at-ease 30-year-old. And we learn, before Arthur does, that the powers that be have decided to bulldoze his house to build a bypass. Later this will become funnier when we discover that Arthur’s house is the type of a greater bulldozing about to come: that of planet Earth, which is to be demolished to make way for a galactic bypass! Even when Arthur finds out that his house is set for demolition, his citizen’s outrage is still only a dwarf version of what he should really be feeling.

Medicine Walk proceeds more or less as a classic archplot: Robert McKee‘s term for a classically structured story. There is a hero, 16-year-old Franklin, who grapples with a difficult problem, with the stations of his journey marked by painful revelations. The Hitchhiker’s Guide is structured as what McKee would call an antiplot: it is an anti-story in which ridiculous coincidences, freak occurrences, and impossibilities take the place of the logical flow of cause and effect that drives conventional stories. In this way it bears resemblance to such works as Wayne’s World or Monty Python’s Life of Brian.

I rated both these books as 4 stars out of 5 on Goodreads. I decided that I would like to read another book by Richard Wagamese, and added one to my reading list; but I’m not sure about Douglas Adams. I appreciated his cleverness and did get some chuckles while reading, but I wonder whether reading more of the same would be the best use of my limited reading time. I’m not a—what’s the term, “hikey”?—that much is sure. One thing that might tempt me back is to see more of the best character in the book: the morose robot Marvin, who I feel pretty sure is the author’s proxy in the story, a kind of techno-Eeyore.

These two works are a great example of what a wide range is embraced by the term novel. Nonetheless, my sense is that these authors are both men of serious purpose. In the case of Wagamese this is obvious; in the case of Adams it’s concealed under the play of comedy. He looks out at the universe—all of it—in search of some kind of sense. He doesn’t find it, which failure provides laughs for the reader, but one suspects that Adams’s struggle with depression meant that, deep down, he didn’t think it so funny.