enough to make the angels weep?

It’s a rainy Saturday morning here in North Vancouver, and I have just completed my morning typing session. Yes, typing, not writing—I start each day by typing the text I highlighted in the previous evening’s reading, or as much of it as I can. It’s my way of processing books. 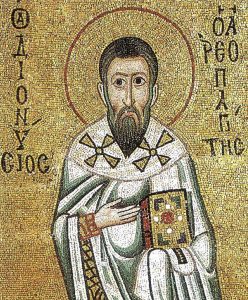 “I have but one head to give for my faith—or do I?”

The last thing I typed from this morning was the Leopold Classic Library edition of The Celestial and Ecclesiastical Hierarchy of Dionysius the Areopagite. It’s a large-ish, floppy, paper-bound print-on-demand facsimile edition of a book translated by the Reverend John Parker and published in 1894 by Skeffington & Son of London. The photocopy includes librarians’ markings here and there. I bought the book online last month as part of what I think of as my ongoing spiritual education. In case you don’t know, Dionysius’s Celestial Hierarchy is the main source of what knowledge we in the West have about angels. In this work he sets out to explain, from a Christian perspective, what angels are and how they are organized in the heavens.

I say “Dionysius,” but if you look up this work you will find that it is attributed to “Pseudo-Dionysius,” for it has been the scholarly consensus for centuries that the works attributed to the 1st-century saint was actually written by an unknown monk in the 5th century. On Goodreads, for example, the author of my book is given simply as “Pseudo-Dionysius.” I myself know nothing about the debate as to the authenticity of Dionysius’s works, but I was intrigued to discover that the translator of this edition, John Parker, is emphatic that the work is genuine, and he lays out a well-informed and, to this reader, strong argument in support of the notion that the works were written by no other than Dionysius the Areopagite, a distinguished and prominent Athenian who was personally converted to Christianity by the apostle Paul when he was in Athens in AD 49. Dionysius was baptized on October 3 that year, at age 44, and went on to become a priest and a trusted and valued confidant of Paul, Timothy, and other key Christians of the time. The epithet “the Areopagite” was due to the fact that Dionysius was a member of the 51-member Court of the Areopagus in Athens, a court of justice whose members were citizens distinguished for their birth, wealth, intelligence, and character. Among these, Dionysius appears to have been preeminent, or at least as one of special distinction. He was known as an author of philosophical works, and became entrusted with teaching new converts to Christianity.

Dionysius had a long and action-packed career that took him to Egypt, Gaul, Spain, and Asia. He attended, along with Paul, Peter, James, John and other apostles, the funeral rites of Mary mother of Jesus in Jerusalem in AD 54. For a long time he was stationed at Paris, teaching. After Hadrian became the emperor of Rome in 117, he sent the prefect of Gaul in 119 to bring Dionysius back to paganism—or to bring back his head instead. It’s reported that Dionysius, now aged 114, refused to convert, and thus lost his head. Montmartre in Paris is named for his martyrdom there.

Dionysius’s surviving works are all in the form of letters, the longer of which are addressed to Timothy, with others being addressed to Titus, Polycarp, and St. John. He states that the teaching on angels is from Paul. As Parker lays it out, the evidence against Dionysius being the author of the Celestial and Ecclesiastical Hierarchy is weak. Here, the simplest assumption is that the stated author is the actual author. Dionysius certainly appears to have been an extraordinary man, one who was intimately involved with the early formation of the Church and who was on close terms with some of its leading players. He is known to have spent time in Ephesus with John of Patmos, the author of Revelation. Is it really so hard to believe that he might be the author of a work on the angelic hierarchy?

I’m no expert, but to me it sounds perfectly credible. I wonder whether Dionysius has achieved a further feat: that of undergoing not one but two martyrdoms. His head was severed from him by Hadrian, and his works have been severed from him by a hostile posterity. Yes. Just as his namesake, the god Dionysus, was known as the “twice born,” St. Dionysius might be thought of as the “twice killed.”