I have talked a bit about my project to read the Bible as though decoding the genome of Western Christendom (that is, Western civilization). I am treating the books of the Bible as “chromosomes” of the genome, with the individual episodes in those books representing the actual “genes” or units of sense.

I’m currently reading the Book of Joshua, or Chromosome 6, but I thought I would illustrate my project a bit more by “decoding” some more of Chromosome 1, the Book of Genesis. In my last post I summarized the first two genes or episodes, which stretch from Gen 1:1 to Gen 2:9. To show you my method in more detail, I’ll “decode” the next couple of episodes as well.

Episode (gene) 3 is also contained within chapter 2, and comprises verses 10–14. Let me quote the exact text from the King James Version:

10 And a river went out of Eden to water the garden; and from thence it was parted, and became into four heads.
11 The name of the first is Pison: that is it which compasseth the whole land of Havilah, where there is gold;
12 And the gold of that land is good: there is bdellium and the onyx stone.
13 And the name of the second river is Gihon: the same is it that compasseth the whole land of Ethiopia.
14 And the name of the third river is Hiddekel: that is it which goeth toward the east of Assyria. And the fourth river is Euphrates.

This is a bit of geography that is simply inserted in the narrative at this point; it stands alone, and therefore, in my view, constitutes a separate episode. This is how I summarized the episode in the relevant column of my decoding table:

A river from Eden that waters God’s garden divides to form 4 important rivers of the world.

Next to that column I have a discussion column, in which I make any observations or questions to myself about the episode. Here is what I wrote in that:

Eden and its garden are the source not only of humanity and agriculture, but also of world geography, in the sense of a structured way of understanding the physical world.

The final column is labeled “Implied Rules,” but this episode is one of the few in which I left this column blank. I couldn’t see how the “episode” produced a rule beyond its authoritative description of the geography of Eden and its world.

Here is my summary of the episode:

God makes the man the gardener of Eden, and gives him leave to eat of any plant in the garden—except of the tree of knowledge of good and evil, saying that on the day he does so, he shall surely die.

Here is my own commentary:

God has given man work to do, and freedom with limits which are backed by the threat of death.

And here are the “rules” I extracted from this episode:

God is man’s master, lawgiver, judge, and punisher. God makes rules for man and man has a duty to obey.

These are pretty significant rules, but I believe that they are indeed the rules that this episode implies. 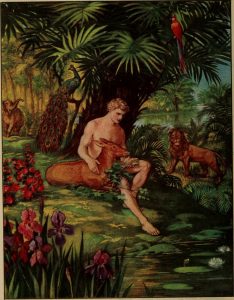 “Can we still be friends?”

18 And the Lord God said, It is not good that the man should be alone; I will make him an help meet for him.
19 And out of the ground the Lord God formed every beast of the field, and every fowl of the air; and brought them unto Adam to see what he would call them: and whatsoever Adam called every living creature, that was the name thereof.
20 And Adam gave names to all cattle, and to the fowl of the air, and to every beast of the field; but for Adam there was not found an help meet for him.

My summary of the episode:

God, taking pity on Adam’s solitude, determines to find a “help meet” for him, and to this end creates all the animals of the world, and presents them to Adam for naming; but none serves as a help meet for Adam.

The animals were created as potential companions for man, and were named by him (not by God), but none completely fills that role.

And, finally, the implied rules for Western Christendom:

Animals were created for man’s benefit and for no other reason.

Again, a most significant rule, especially in light of the environmental crises that face the Earth of today. But, here again, I think the rule is fully implied by the text.

I hope you can see why I find this project so interesting and involving. I have more than one motive in doing it. One angle was sparked by reading The Great Code by Northrop Frye. In this fascinating book Frye notes that all of English literature is heavily influenced by the Bible, so much so that to read this literature without a good knowledge of the Bible is to read it blind. I recently read The Tenant of Wildfell Hall by Anne Brontë, and this novel was certainly replete with biblical allusions.

In all, my Bible-reading project may be big and slow, but it feels very worthwhile. In doing it, I really feel that I’m spending my time well—rather like a man who is circumnavigating the world on foot.