I live a life of ideas. But what does that mean, exactly?

Certainly, at a minimum, it means that I like ideas and enjoy exploring them. I read a lot and so you could say that I love reading (and you’d be right), but the pulse underlying that love, I think, is the love of ideas. But even I, who love ideas, am hard put to it to explain what it is exactly about them that I love, and why this love can spur feelings of excitement within me. What on Earth is lovable about an idea?

In the first place, it’s not completely clear what an idea is. Idea itself appears on the list of 103 Great Ideas compiled by the editors of the Encyclopedia Britannica Great Books of the Western World series, which means that they found it to be of special importance in the history of Western literature, and also that they found it to be controversial, meaning that there is no universally accepted definition of it. In the words of the introduction to Idea in the Great Books set:

Each of the great ideas seems to have a complex interior structure—an order of parts involving related meanings and diverse positions which, when they are opposed to one another, determine the basic issues in that area of thought. . . . The great ideas are also conceptions by which we think about things. They are the terms in which we state fundamental problems. They represent the principal content of our thought.

In some way, ideas, and especially the Great Ideas, stand at the interface where the mind meets the world. They are the fundamental working materials of the philosopher, as paints are of the painter or wood of the carpenter. But ideas are not a monopoly of philosophers, or of professional philosophers, anyway; we all make us of them to some extent. Indeed, I suspect that if we, any of us, examine our beliefs, we will find that they are based on some more or less definite notion of ideas, and in particular the Great Ideas. 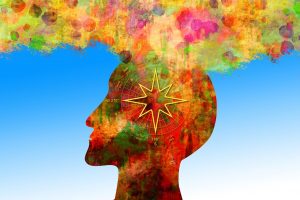 Where the action is.

Granted, few of us examine our beliefs—that’s the province of the philosopher. We just believe them. And by that I don’t mean that we profess faith in them; I mean that we act on them. Our beliefs are exactly those mental constructs that we do act on.

An example? Suppose I believed that people in general are selfish and greedy, and will cheat you and steal from you if they think they can get away with it. It’s not hard to see that this belief would affect my behavior in many ways. I would treat people with suspicion and would be slow to extend trust. I would avoid doing favors or lending things to people. This belief would also color and guide my actions in the economic and political spheres of life: how I invested my money, how I voted.

All other beliefs are the same: they guide action. I hesitate to say that this is their purpose—although it might be—but it is certainly their effect. And this is as true for big, cosmic beliefs as it is for smaller, homelier, more social ones, as in my example above.

An important point here is that I’m talking about our actual beliefs and not our stated ones. The two might coincide, but often they don’t. Furthermore, we might not even be aware that they don’t coincide. We might genuinely tell ourselves that we believe the thing that we’re saying, when others can easily see that our actions say otherwise. I might firmly avow that my family is the most important thing in my life, and yet spend all of my waking hours at the office. In this case I would use rationalizations to account for the seeming discrepancy. Such are the complexities of the human mental economy.

Nonetheless, there will, in each case, be actual, truly held beliefs underlying our actions, regardless of what we profess or what we tell ourselves we believe. And I think that if you were to trace these beliefs back to their source, to the beliefs underlying the beliefs, as it were, you would find the Great Ideas, or things close to them. And this would be so even if we have never consciously thought about any of the Great Ideas in our life.

Let’s consider the first item in the alphabetical list of Great Ideas: Angel. Some people definitely believe in the existence of angels, while many others disbelieve. Many others will profess belief or disbelief but actually, deep down, hold the opposite view, and therefore act on it. And the kinds of actions you would take based on your belief would depend on the specific features of your belief: are angels necessarily good? do angels involve themselves in worldly affairs? were all angels once human beings? are angels organized in a hierarchy? And so on. The specific actions you would actually take will depend on your positions on these things.

You might profess not to know, to be agnostic; and you could be entirely genuine and truthful in that. Nonetheless, I think your actions would still tell the tale. If your actions are the same as those of someone who definitely does not believe, then that is the bet you have really made, whatever you may profess.

The next idea on the list is Animal. Could that really be a Great Idea? What’s controversial about the idea of animals? Well, one question is whether human beings are animals, and, if so, in what ways we share qualities with other animals. Our ideas about animals govern things like our diet, our thoughts about zoos, and our position on animal rights. What exactly makes an animal different from a plant? How conscious are animals? Again, our beliefs about these things will determine our actions.

But what’s to love here? Why care? Even though I have strong feelings about this, I find the question not so easy to answer. I could say that the better our knowledge is, the more complete and more accurate, the better our actions will be: we’ll make fewer mistakes and attain our aims more surely. And while I think this is true, I believe it is only the most superficial benefit of engaging with ideas.

The more we engage with ideas, learn about them, think about them, the more we engage with our own selves in totality. We discover mistakes and inconsistencies and contradictions in ourselves. If we care about our personal integrity, then we will want to address those things. Engaging with ideas is the path to wisdom, at least in a worldly sense, and wisdom is one of the virtues. Not only that, but it is virtue that, perhaps more than any other, helps us to cultivate the other virtues by moving from an unconscious way of living to a conscious way of living. And from ancient times, the wisest heads have affirmed that the cultivation of virtue is the path to happiness.

To engage with ideas is, I believe, the deepest and most powerful way to try to make sense of the world. For our whole life is a making sense of the world. The world of the newborn is “one great blooming, buzzing confusion,” to quote William James, and from the moment of emergence from the womb we are confronted with the task of ordering our experience and understanding it. Most of us get to a certain point with that and then give up, satisfied with where we’re at. I don’t feel that way; I’m not satisfied and I’m not going to give up.

When out hiking in nature it can be thrilling to come upon some new vista: so rich, so vast, so complex. I suppose I feel that there are similar thrills in the world of ideas, but that these thrills are greater and more significant, because the way we relate with them affects our whole experience of life, in every landscape in which we find ourselves.

Yes, I live a life of ideas, and am profoundly grateful to be able to do so.

email
This entry was posted in thoughts and tagged angels, animals, ideas, Philosophy, the Great Ideas. Bookmark the permalink.