some thoughts in action

What do you believe in? What are the most deep and certain truths in your life? Do you know? Do you ever take an inventory of your beliefs, or try to be conscious of what exactly they are? I suppose if you did that you would definitely count as a philosopher. I’m not sure that I can say that I exactly inventory my beliefs, but I do think about them; and I think that I am a philosopher. 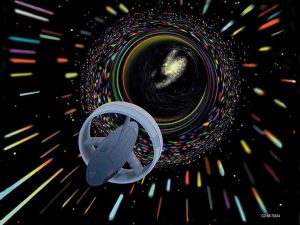 Over the past year or so my mind has been opened to new vistas. I see the world differently, and things are still changing for me. It’s an exhilarating experience, and I don’t know where it will take me. I’m reminded of watching Star Trek long ago: the starship Enterprise was put into warp drive, and with a flash of distorted space and starlight it was gone, faster than light. My mind is the Enterprise, and I feel the warping effect of moving at high speed to I know not yet where.

I’m trying to remember how it started. What comes to mind is the book Journeys out of the Body by Robert A. Monroe, published in 1972. Monroe, an American businessman, set out in the late 1950s to document his ongoing out-of-body experiences, doing his best to take a systematic approach with the intention of creating a work of scientific value. I got the book in September 2017 as a research text for The Age of Pisces, for I had decided to include out-of-body action in my story and wanted to read some firsthand accounts. Monroe, over the course of his experiments, found that he visited three different realms or worlds while in his “astral” body: one was our familiar physical world, which he was able to fly over and through, and two others were worlds that had no physical counterpart that he was aware of. Unless Monroe was hallucinating the whole program, then his experience points to the existence of unseen realms, levels of reality, existing all around us and of which we are usually ignorant.

The door had been opened, and I stepped through. I was driven by a basic question: What’s going on? What is the actual nature of the world, of reality?

My researches have taken me from book to book, idea to idea. From Monroe I went to the work of Sylvan Muldoon, an earlier American subject of out-of-body experiences, who also tried to create a systematic account with his The Projection of the Astral Body. My paperback doesn’t give the original publication date, but in the text there is mention of correspondence between Muldoon and his collaborator Hereward Carrington in the 1920s. Muldoon gets into details of the experience, things like a close examination of the cord that connects the astral to the physical body (it is apparently infinitely elastic, and has a cablelike structure of many filaments wound together) and the specifics of how the astral body interacts with regular physical matter. I learned intriguing details such as that while some dogs can perceive astral forms, others cannot.

I had long before become persuaded that the mind, that is, the experiencing part of ourselves, is separable from the physical body. The accounts I read in Raymond Moody’s book Life After Life in 1986, about near-death experiences, convinced me, and indeed were a spur to resume my interrupted search for a path of Buddhist meditation. I soon found that path, and more or less forgot about the topic of astral travel. The Buddhist path, after all, emphasizes our relationship with our immediate experience, whatever that is, and furthermore denies the existence of an immortal soul—even as Buddhist cosmology acknowledges the existence of realms beyond the physical: the so-called fine-material or “form” realm, and beyond that the “formless” realm occupied by purely mental beings. According to Buddhism, all of these realms are full of beings, but they—we—all share the painful trait of being convinced of their own inherent, permanent existence.

After reading Monroe and Muldoon, I found my curiosity sharpened; I wanted to know more about the unseen realms. Who could tell me about them?

I found more books, ordered them, read them. A striking one was Discovery of Subtle Matter: A Short Introduction by the German chemist Klaus Volkamer, which I got in October 2018. Volkamer, a trained scientist, had arrived at his own views of subtle matter based on a long series of experiments he conducted on living things, including humans, using sensitive digital scales. He found that living things, in the process of dying, at some definite point give up the ghost: that is, they suddenly lose a quantum of mass even while inside a hermetically sealed jar. In the case of humans he didn’t measure them while they died, but rather while they slept. When we fall asleep we lose about 120 grams of mass; the weight returns when we awake. After controlling for every alternative, Volkamer concluded that when we sleep a subtle material body, one that has measurable mass, leaves our tangible body, and returns to it when we awake. It is subtle in the sense that it is not detectable by any means except by its mass—which makes it exactly like the “dark matter” of modern cosmology. According to current cosmological theory, our universe is largely composed of this invisible stuff; it is thought to constitute 85% of the mass of the universe.

Now on the scent, I tracked down more books, and felt that I’d hit the mother lode with the Theosophists: Rudolf Steiner, Charles Leadbeater, Arthur E. Powell, Annie Besant. The Theosophists of the 19th and early 20th centuries made detailed clairvoyant explorations of these very topics, and found a great wealth of information. Their researches revealed a great deal of structure in the unseen realms. The Theosophists, contra the Buddha, do assert the existence of an immortal soul or “Ego,” as they term it. But connected with the Ego are a number of different bodies or “vehicles,” of which our familiar physical body is merely one: the densest one. The other bodies are made out of matter of their own, but matter that is finer or subtler than the coarse matter we know. The physical world actually contains 7 subgrades of fineness: the 3 phases of solid, liquid, and gas, plus 4 more phases beyond those, which together constitute the “etheric” level of matter. Above the finest grade of etheric matter lies the astral realm, which has 7 sublevels of its own. And there are further levels above it.

Again I’ve run past my planned word count, and still haven’t got to where I’d hoped to get to! And where was that? Well, I suppose a kind of “belief position paper”: a sketch of where my beliefs are at right now. The 19th-century American philosopher Charles Sanders Peirce (1839–1914) distinguished between what he called “thought in action” and “thought at rest”:

thought in action has for its only possible motive the attainment of thought at rest. . . .

“Thought in action” is thinking; “thought at rest” is belief. As for belief, Peirce thought that it has exactly 3 properties:

For my part I’m not certain about the first of these, for I suspect that there are unconscious beliefs, or at least implicit ones. The other two strike me as being sound, though, and indeed connected, for it seems likely that the “irritation of doubt” arises just because we don’t know what to do in a given situation. We have no rule of action, so we hang in suspense. Time being precious, this is a painful condition.

Right, so what am I saying. My thoughts remain in action here. My beliefs feel less settled than they were, say, 3 years ago. But whatever doubts I may have had about the existence of an astral world that is coincident with our coarse physical one, and of other worlds beyond that as well, and beings of various kinds inhabiting these realms, are now much less; nay, I would say they are extinct. I believe in these things. But there is so much still to learn that I can’t describe my thoughts as being at rest at this stage. Oh no: they are as busy as they have been at any time in my life.

Maybe I could add a notion to Peirce’s ideas of thought in action and thought at rest: the notion of direction. For my thoughts are not merely moving; they are heading somewhere. The feeling of progress eases the irritation of doubt. For when we’re traveling toward a cherished destination, the feeling of approaching it is satisfying in itself.

Indeed, this might be the very best we can do. For are not all our beliefs temporary? Don’t they all fall sooner or later in the light of new knowledge? We might fight the realization like wildcats, but don’t we all keep discovering that the world is bigger and stranger than what we’d thought? I think we do.