finding another career for Charles Dickens

The word novelist is a generic one, comprising many and various species of writers before one gets down to the actual individual practitioners. For the kinds of book-length fiction fall along a wide spectrum. A natural way to categorize novelists is by genre, even as each genre itself usually allows of many subgenres. They could also be categorized by literary quality, popularity, volume of output, level of language, and many other ways. But recently I thought it would be interesting to consider the underlying profession or alternative occupation of each novelist.

What do I mean? Well, I myself am probably a philosopher. Even though I am writing fiction, my approach and my attitude, my concerns and my methods, even, are in many ways those of the philosopher. I’m interested in the idea content of fiction, of stories, and this concern informs my whole approach at every stage. I conceive of situations and action as being interesting due to the interplay or conflict of ideas. I am a philosopher-novelist: that is the species to which I belong within the genus novelist.

Who are some other members of this species? Some famous philosopher-novelists of the 20th century spring to mind, such as Albert Camus and Jean-Paul Sartre. As a young man I enjoyed the writing of both these authors, although I thought that Camus was a much better and more natural writer. I think the first thing I read by him was the short story “The Guest,” when I was a teenager. It’s a simple story but I found it absorbing; even in translation the prose was precise and telling at every step. It simmered with underlying conflict. I suppose I’m trying to say that although the author was an ideas man, a philosopher, he was still first and foremost a storyteller. He was a philosopher-novelist.

Others who might fit in that category are Leo Tolstoy, Hermann Hesse, and Ayn Rand.

What are some other “alternative occupations” held by novelists? A few that spring to mind: journalist, historian, society columnist, advocate, gossip, prima donna. What novel are you reading right now? What are the interests, strengths, and attitudes of the author? What alternative occupation might these suggest? 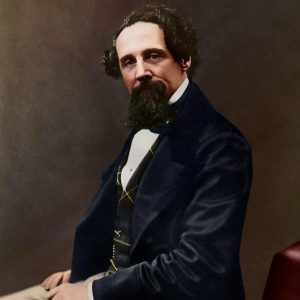 “Have your people call my people.”

I’m reading The Pickwick Papers by Charles Dickens, published in 1837—his first novel. So I’ve been thinking: what sort of a person writes a book like this?

The author is a humorist, for sure; his writing reads the way Victorian cartoons look, with their greatly exaggerated but also meticulously detailed figures. Is Dickens a cartoonist-novelist, then? Not exactly—at least, not a typical editorial cartoonist, for such a person usually has keen political interests. Dickens is interested in morality and in society. His humor tends to be situational rather than satirical, and his stories tend toward the episodic. He is also eager to show heartfelt emotional interactions between his characters. All of these things are putting me in mind of my own sometime medium of television. Could Dickens be a TV comedy writer-novelist?

I think that’s not a bad stab. It’s certainly not hard to imagine The Pickwick Papers as the Victorian equivalent of a situation comedy. Television didn’t exist in his day, but I have no doubt that Charles Dickens, an Aquarian, would have taken to it like a duck to water. He could easily have become the modern phenomenon of the writer-producer “show runner”: talented, prolific, and with a strong vision and a sure hand at creating characters, which he seemed to do without effort. He might be comparable to Julian Fellowes of Downton Abbey fame, who has a Dickensian knack.

Yes, I think I’ve hit on it: Charles Dickens was a television writer-producer 150 years before his time.