reading the author and not just his reputation

I keep my reading list in a note on my iPhone. Whenever I come across a book I think I might want to read, I add it to the list. Most of the entries are nonfiction, and there are more of them than I could ever read. The most recent addition to my list was Putin’s People by Catherine Belton. I got this title off of Twitter a couple of days ago in a tweet posted by Garry Kasparov, a former world chess champion and now a keen advocate of democracy and human rights. Thus does viral marketing work in the publishing world these days. It’s a new book, published just a month ago. Will I ever read it? I hope so, for I am interested in Russia and in the machinations of dictatorship. But my mind is in a ferment these days; so many things are clamoring for my attention that I doubt I will find time for works, ever very interesting ones, that don’t directly relate to my various projects.

Fiction is a different story. I add far fewer novels to my reading list, and so there is a good chance that I will read all that I do add, since I like to read fiction every day. As with the nonfiction books, the novels too come from various sources. I’m currently reading an 1842 novel called Zanoni by Edward Bulwer-Lytton, a writer who has become notorious as the author of the opening sentence, “It was a dark and stormy night” (not the opening to Zanoni, though). 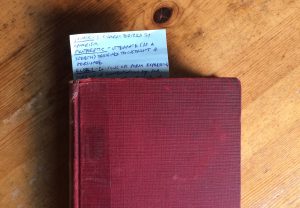 As mysterious as its protagonist.

How did this book make it onto my list? It was mentioned in one of the Rudolf Steiner books that I read last year as part of my new interest in Theosophy. Steiner mentions, I think in a footnote, that this novel presents a fairly accurate account of the relationship between an esoteric master and disciple. Thus does a fictional work fit in with my research aims of the moment; I’m killing a couple of birds with one stone. I was pleased to discover that the West Vancouver Memorial Library has a copy, so I put it on hold and picked it up three days ago.

My impressions so far? I’ve made it to page 82 of 540, and thus far I’m liking it more than I expected. Bulwer-Lytton’s reputation is so bad that I was ready for cloying, florid prose, but this I don’t think I’ve got. Here’s the opening of chapter 1:

At Naples, in the latter half of the last century, a worthy artist named Gaetano Pisani lived and flourished. He was a musician of great genius, but not of popular reputation; there was in all his compositions something capricious and fantastic which did not please the taste of the Dilettanti of Naples. He was fond of unfamiliar subjects into which he introduced airs and symphonies that excited a kind of terror in those who listened. . . .

I don’t reproduce the whole first paragraph, for it goes on for another 2 pages. But, speaking for myself, I found this opener engaging. The narrator starts right in talking about something specific and unusual; in addition, it relates to the fine arts, in this case music, which appeals to my own tastes. He is addressing an educated and cultured reader, and I am happy to be looked at in this way, and therefore I’m willing to extend him credit and more of my attention.

While I don’t find the prose especially cloying or florid, the writing is romantic and melodramatic. The heroine, Pisani’s daughter Viola, is preternaturally beautiful, gifted, and virtuous; the hero, Zanoni, is similarly handsome, suave, and impressive. But this tends to be true of all literature from the past. I have a book, Collected Ancient Greek Novels, edited by B. P. Reardon, which contains the surviving long-form fiction from ancient Greece; these novels are populated by characters who are idealized and far from realistic. The notion of presenting characters who seem more natural and human seems to be a relatively recent thing that developed through the 19th century. So I can’t tax Bulwer-Lytton with a fault here; in this regard he was simply part of the literary mainstream.

Another thing I appreciate about Zanoni is that it is shaping up to be a novel of ideas. We’re at a time leading up to the French Revolution, and characters have strong feelings and opinions about the issues involved—as indeed the author himself appears to. As a reader, I like characters who care about ideas; I instinctively relate to such people as kindred spirits and enjoy spending time with them. The modern trend to present characters who are motivated only by money and sex, or by things which are barely more elevated, like patriotism or revenge, to say nothing of characters who are out-and-out sociopaths, makes for boring literature. I’m much more interested in seeing how characters who think deeply manage life’s difficulties.

So far the clash seems to be between a religious and a philosophical view of life—a clash that was already being satirized 100 years earlier by Henry Fielding in Tom Jones. With the benefit of hindsight, the narrator sees how people espousing high philosophical ideals will be transformed by the French Revolution into bloodthirsty monsters.

But is that what the main thrust of Zanoni is to be? I don’t know; it’s early days yet. But I’m willing to find out. The battered hardback from the West Van Library, which has seen so much action since it was printed in 1937, is engaging one more reader.