a sentence with hidden depths

Posted on 7 September 2020 by Paul Vitols

Thus the opening sentence and the opening paragraph of A Portrait of the Artist as a Young Man by James Joyce, originally published in 1916 and originally read by this reader in 1977, at the age of 18. From that time until this I have thought of it as my favorite novel and the best novel of all time, and I hope to say more about that in a future post, but for now I want to examine just the opener. How does it stack up against the “dark and stormy night” opener of Edward Bulwer-Lytton’s Paul Clifford?

His father told him that story: his father looked at him through a glass: he had a hairy face. 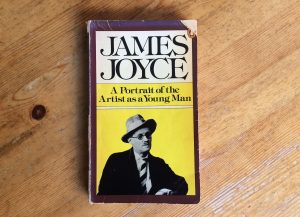 Not just another boy-meets-cow story.

That gives us the context. But the opening sentence itself always struck me as strange and I wasn’t sure whether I liked it or not. The opening of a story is very important; why does this one open with this particular image? What might it be telling us about the book to come?

We will come to see that this story is about a boy, a “young man,” and is a chronological account of his growth into an artist—a literary artist, a poet. So the opener may very well be his earliest memory. The fact that it is his memory and not, say, an objective statement of his time and place of birth, is in keeping with the fact that this story, although narrated in the third person, will cleave close to the protagonist (whose name is Stephen Dedalus) and make us privy to his inmost thoughts and feelings. It is not about his life so much as about his experience of it. So we open with a memory, not a fact.

The memory itself is of a story being told: it is a work of verbal art on the part of his father. And so the sentence foreshadows Stephen’s own vocation as a storyteller; in this way, if in no other, he will follow in his father’s footsteps. This might be especially significant, given their strange name, Dedalus, which is that of the mythical Greek engineer who built the labyrinth that hid the Minotaur of King Minos. As so often happens when one creates something for an autocrat, the invention winds up turned on oneself, and Daedalus (the usual spelling for the Greek hero) wound up imprisoned in the labyrinth with his son Icarus. Father and son. Daedalus invents wings so that they may both fly away.

None of that material is in the opening sentence itself, but the mythical situation is nonetheless present and the sentence, in its way, serves its needs. The opening sentence is of a father talking to his son, but talking poetically—telling a story, and, more particularly, inventing that story on the spot. The gift of invention, of creation, is being transmitted from father to son. This gift of artistic invention may even be the “wings” that the mythical  Daedalus fashions for himself and his son: the means by which they may escape imprisonment in the labyrinth. The young Stephen Dedalus will find himself hemmed in by various restricting circumstances and challenged to find the wherewithal within himself to break these chains. If anything can enable him to fly free, it is his vocation as an artist. But it will take time for that vocation to form itself and make itself known to him.

Another thought: the father’s story is about a “moocow.” In the myth of Daedalus, the engineer was engaged by King Minos to create something to entrap and enclose a monster, the Minotaur, the “bull of Minos.” Now the Minotaur was the progeny of Minos’s own wife Pasiphaë, the product of her unnatural lust for a pure white bull. Minos had prayed for the emergence of a perfect bull from the sea as a sign of his right to rule in preference to his brothers, and had promised to sacrifice it to Poseidon. But when the bull appeared, Minos was so impressed that he decided to keep it for himself and offer up something else to the god. Poseidon, angry, evoked the lust in his queen as a punishment for the king, who had made what Joseph Campbell describes as a “merchant’s substitution.” In a further development of the myth, Athens somehow becomes bound to send seven youths and seven maidens to Minos every few years to be devoured by his Minotaur.

So the Minotaur is a bovine monster that eats children; this puts a different twist on the moocow coming down along the road to meet baby tuckoo. The young Stephen, without knowing it, is in peril of his life. And if his father is viewed as Dedalus senior, the engineer, then he is himself the author of the problem, for in the myth Daedalus enables the spawning of the Minotaur by designing the wooden cow in which Pasiphaë hides to be serviced by the white bull. The relationship between Stephen and his father Simon Dedalus will be shown as complex in the course of this novel and also in Ulysses, where they are both significant characters. The opening of A Portrait of the Artist hints that, of all the lures and snares that Stephen will face as he matures to his artistic calling, perhaps the most serious and threatening is represented by his own father. The threat lives as an undertow beneath his father’s seemingly innocent boy-meets-cow story. Indeed, the first thing we’re told about Simon Dedalus is that he has a hairy face: is he the Minotaur?

All of these meanings simmer beneath the surface of the opening sentence, but they will not become manifest until later, when the work as a whole has been read and reflected upon. But this is a mark of an excellent opener: it acts as a hologram, showing the meaning of the whole in its short space. The sentence fulfills its proper functions of setting the scene and setting the tone, but does these things in an innovative and unexpected way. All things considered, I think it’s a truly superior opening. The reader may have little idea what to expect next, but the opening suggests that one must be ready for anything. In short, the sentence is consistent with my assessment of this novel as the best of all time.

email
This entry was posted in thoughts, writer's notes and tagged A Portrait of the Artist as a Young Man, Daedalus, James Joyce, literary criticism, Minotaur, opening sentences, Ulysses. Bookmark the permalink.