a first sentence can tell you a lot: The Amber Spyglass

Time again to examine the opening sentence of a novel. This time the novel is The Amber Spyglass, published in 2000, the third and final volume of Philip Pullman’s young-adult fantasy series His Dark Materials. Without further ado:

In a valley shaded with rhododendrons, close to the snow line, where a stream milky with meltwater splashed and where doves and linnets flew among the immense pines, lay a cave, half-hidden by the crag above and the stiff heavy leaves that clustered below. 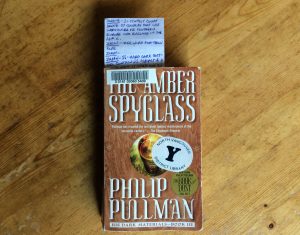 The journey of a thousand miles begins with 45 words.

The first thing I notice is that it’s rather long at 45 words (44 if you choose to regard “half-hidden” as a single word). Long sentences take time to process and they slow a reader down; they also test a reader’s commitment, since they are more demanding to read than shorter sentences. It’s risky to do that with one’s opener, unless there’s a good reason. Is there a good reason here?

Personally, I don’t think so. We have what’s known technically as a complex sentence, that is, one that contains a single main clause and one or more subordinate clauses. The main clause takes some hunting to find; it is:

All the other clauses and phrases serve to modify that basic proposition. And what a lot of them there are! I count three more clauses. So it’s more than complex; it’s what I would call complicated. For what reason? None that I can think of. The author starts off here by testing the reader’s attention and patience.

Next I might ask about the function of the sentence: what is it doing for the story? This one appears to be straight-up scene setting. It’s a description of a location, with no hint of character, action, or story. The opening image might also be important in terms of suggesting the theme of the story. While I can’t be sure at this stage, the sentence doesn’t feel “theme-y” to me. But possibly the image of a cave will be important, since it is a powerful symbolic image connected with the Earth, the underworld, and such significant ideas as Plato’s Cave. On the face of it, though, it appears to be an involved description of a natural location, giving no hint as yet as to why it might be important or significant.

Next I would look for figurative language, which is the hallmark of creative writing. Here there is virtually none. We have the metaphor milky to describe the stream, which is okay but not especially original. Other than that, the language is literal: a factual record. When I think of the ideal of purely factual prose, I imagine a police report: a noting down of facts with a minimum of emotional coloration. A police report would not use such long, complex sentences, and would no doubt skip many of the natural details of this scene in order to cleave more closely to the subject of the report, whatever or whoever that might be. In a way, I wish the author here had taken more of that kind of approach, for, although I have no objection to an author’s taking his time in getting into his story, I do want to feel that what I’m reading matters, that it is somehow important to the story as a whole. If a location is to be described in detail, then that location should be central in some way (here I think of Thomas Hardy’s location descriptions); and if the opening is to be merely description, then that description should be beautiful, poetic.

Here we don’t have that. When I first read the sentence I had a disquieting feeling that the author did not care very deeply about this scene or about his story. There’s a sense of going through the motions. And, truth to tell, that feeling grew as I read on, and I finally decided to quit reading at page 141.

email
This entry was posted in thoughts and tagged opening sentences, The Amber Spyglass, writing. Bookmark the permalink.