writers gotta eat—or do they?

I have just embarked on a new dietary regime. It is called the 5:2 Fast Diet: a diet in which you fast for 2 days a week and then eat and drink what you like for the remaining 5 days. Most diets don’t work. They do usually lead to temporary weight loss, but it is always temporary. If one goes off the diet, one’s weight goes back up. The Fast Diet is different; the many thousands (millions?) of people who have tried it are unanimous in affirming that the drop in weight is lasting.

This is because one never really goes “off” the diet; it is a lifestyle change. If you have a target weight, you can shift to a 6:1 Fast Diet (one day of fasting, 6 days not) to maintain your new weight. It turns out that the human body is designed for fasting; like dogs and other predators, we are physiologically set up to go for long periods without much food, and then to dine out when we finally come across some. Our modern lifestyle of perpetual eating, snacking, and grazing is not what we were built for, and we have the body shapes and health problems to show for it.

So how did I get into this? It happened almost by accident. Two weeks ago, my wife Kimmie checked her blood pressure. Her daughter Robin lent her a sphygmomanometer, and I helped Kimmie put the cuff on and run the device. Her blood pressure was 147/80. This is in the “high” range (normal blood pressure is below 120/80). Kimmie, alarmed, declared on the spot: “That’s it—no more wine!” We were in the habit of drinking wine every night, and I would drink scotch as well. We had done it for years, nay, decades, and Kimmie had just given it up on the spot!

I couldn’t let her do it alone, so I said, “Okay, me too.” Just like that, we gave it up. I’d gone to bed a drinker and risen from it a teetotaler. My own blood pressure that morning was 130/76: high on the systolic side. 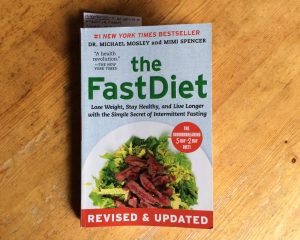 Want to be a loser?

So that got me thinking. I had been intrigued by a book called The Fast Diet by Michael Mosley and Mimi Spencer. I had read Mosley’s The Clever Guts Diet, which persuaded me to promote the health of my microbiome by cleaving more or less to the “Mediterranean diet.” I noticed that he’d co-authored this other book, and I was curious about it. My own weight has risen in the past 5 years or so, but I didn’t know how much, since we don’t have a scale and I only weigh myself about once a year, when I’m in a medical office where a scale is handy. Sensing opportunity, and a desire for change, I ordered The Fast Diet, and not long after that I also ordered a body-weight scale.

I’ve now read the book, and I’m excited about embarking on the 5:2 Fast Diet. On the “fast days” you don’t actually eat nothing; the fast consists of cutting back to 25% of your regular daily caloric intake, or about 600 calories for men and 500 calories for women. Much of the book consists of recipes for how to achieve this in a way that is nutritious and savory. Michael Mosley splits his calories between breakfast and dinner; I’m going to try to fast all through the day and eat my calories just at dinnertime (my menu: crudités and cottage cheese). I’ll make it, for I’m highly motivated.

My weight this morning was 191 pounds. My target is 178 pounds, which is what I weighed in 2015 when I was briefly working for Canada Post; it’s also what I weighed when I left Gampo Abbey in 2002 after spending 6 months as a (vegetarian) Buddhist monk; and it’s what I weighed when I first went out with Kimmie in 1985, at age 26. If my experience of the diet is like that of other people, I should get there by March 2021.

I’ll enjoy the weight loss, but it’s the other health benefits that I’m really interested in. They are described and documented in the book. But heart, blood sugar, and immune system all benefit strongly by this diet. So it might be something that even you, dear reader, wish to look at.