life is but a dream

Posted on 1 February 2021 by Paul Vitols

Good gosh, I’ve got to get back in the saddle here, somehow. Who knew I could have writer’s block about my own blog?

One issue is the very open-endedness of my blog. When you can write about anything, what do you write about? If I restricted my theme, I (and my long-suffering readers) would probably fare better.

Okay, I can always talk about what I’m reading, for I am always reading something; indeed, I am always reading several things. Last night I started reading a book that recently arrived in the mail: The Waking Dream: Unlocking the Symbolic Language of Our Lives by Ray Grasse. It was published in 1996 by Quest Books, an imprint of The Theosophical Publishing House, and I think I was pointed to it from the “suggested reading” list of another recent book. Anyway, this idea of looking at the meaningful, dreamlike quality of everyday life has long intrigued me, and when I saw that there’s a whole book on just this topic, I couldn’t resist—as, indeed, why should I? 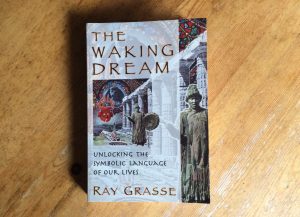 Hermeneuts of the world, unite!

I was immediately captivated as I started to read the introduction. First, by way of background: it was Sunday, which means that Kimmie and I planned to watch a movie (at home) that night. I’ve been running my own Paul’s Decades Festival for a couple of months, in which I have been programming my picks for the top 5 movies of each decade since the 1920s. I’ve gotten down to my #1 picks for each decade, and last night it was the turn of the 1930s: The Wizard of Oz (1939). So that was already set when I started to read. Here is the opening of the introduction to Grasse’s book:

While preparing for his role in the 1939 film The Wizard of Oz, actor Frank Morgan decided against using the costume offered him by the studio for his role as the traveling salesman Professor Marvel, opting instead to select his own wardrobe for the part. Searching through the racks of second-hand clothes collected by the MGM wardrobe department over the years, he finally settled on an old frock coat that would eventually serve as his costume during filming of the movie. Passing the time one day, Morgan idly turned out the inside of the pocket of the coat and discovered the name “L. Frank Baum” sewn into the lining of the jacket. As later investigation confirmed, the jacket had been originally designed for the creator of the Oz story, L. Frank Baum, and somehow made its way through the years into the collection of clothing on the MGM lot.

A coincidence, certainly—even a double one, in a sense, for my coincidence involved reading about not just the movie that I’d scheduled for that night, but about a coincidence connected with it. So a kind of second-order coincidence.

But was it meaningful? All I can say is, it sure felt that way. And with respect to meaning, what other standard can you apply? Meaning is a subjective experience, and there is no way of objectively measuring its presence, absence, or depth, at least, not that I’m aware of. If I feel that something is meaningful, then, for me, it is.

As for the content of that meaning, the question of what was it trying to “tell” me, I’m not sure. At a minimum, though, I find these charged moments of coincidence to be like signposts, and the basic message is, “you’re on the right track.” Here’s a book whose mission is to teach me about the hidden significance of everything in my life, and its very first words provide me with a concrete example of its teaching. Apart from anything else, this tells me that I chose the right book for this moment. I had a several new arrivals to choose from, and I felt most excited and interested by this one, so I started reading it.

This symbolic way of viewing the world is ancient and was pervasive throughout all societies until relatively recently, when the Western materialistic stance became dominant and the processes of reality came to be seen as mechanical and empty of significance or purpose. This materialistic outlook is the hallmark of our mental life in the Waste Land—the spiritual desert that Western humanity has been living in since about the 13th century, according to Joseph Campbell. But for my part, I’ve been a “symbolist” since at least the 1980s. Our lives are filled with significance, to which we are for the most part blind.

But that blindness is, in some way, voluntary. And I intend to continue to sharpen my symbolic vision, rising like the prisoner of Plato’s cave from his darkness and chains to find his way into the full light of day. And I think that this book, The Waking Dream, will help me find my way there.

email
This entry was posted in reading, thoughts and tagged Art, occult philosophy, Ray Grasse, symbolism, The Waking Dream: Unlocking the Symbolic Language of Our Lives by Ray Grasse, theosophy. Bookmark the permalink.