at the top of my reading period

Okay, so I care about reading. Well, that’s what I should be talking about, then, isn’t it.

Every day I have a reading period. It starts usually around 3:15 p.m., although it might be earlier or later, depending on conditions. Years ago I would start reading around 4 o’clock, but that made me pressed for time. Now, even with my earlier start time, I find that I’m still pressed for time. But it’s just not practical to start earlier than I do—or to read later, for I pack it in at 7 o’clock when Kimmie and I have our dinner.

The period is fairly structured. I always (well, usually; I might skip if I’m running late) start with whatever dharma text I’m reading. My relationship with Buddhism has been, what shall I call it, nonlinear? In many ways I’m a lapsed Buddhist. It has been almost 20 years since I attended the meditation center in Vancouver where I am still notionally a member (my monthly dues are still deducted automatically from my account), and my meditation practice has fallen to a schedule of bare maintenance: 30 minutes on most days. I have not been on a meditation retreat since I returned from Gampo Abbey in August 2002 after a 6-month stay as a temporarily ordained monk. And my relationship with the dharma has changed, although I would be hard pressed to characterize the exact nature of that change. It’s not so much that I have doubts about the teachings of the Buddha; it’s more about how those teachings can be adapted to my life as a Westerner and as a citizen, artist, and thinker of the West. All of these things place me in a different relationship with the teachings than I had in 1987 when I took my Refuge vow and formally became a Buddhist. But that vow remains in force; I have never renounced it. 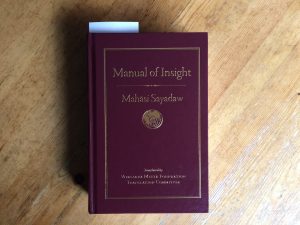 Turns out there’s lots to say about nonconceptual experience.

My main connection with dharma now is through reading. And I express my respect for it by placing my dharma reading at the head of my reading period, when I am at my freshest. My current text is Manual of Insight by Mahasi Sayadaw, a Burmese meditation master who died in 1982. Sayadaw was a highly respected figure in the Buddhist world; among other things, he was a “final questioner” and editor of the Sixth Buddhist Council held in Burma from 1954 to 1956. These councils, dating back to the time of the Buddha, bring together monks from all over the Theravadan Buddhist world to compare and clarify texts. Sayadaw was known particularly as a master of vipassana or insight meditation, and it was because I wanted to known more about vipassana (or vipashyana in Sanskrit) that I turned to this book. In its online description it appeared to be comprehensive and authoritative, and I already held the publisher, Wisdom Publications, in high regard. So I plunked down my $60 or so (I don’t recall–but I’m shocked to see, in a search I made just now, that there doesn’t appear to be any used copy of this book available for less than $250 Canadian! But you can get a new copy from a British seller on eBay for about $64) and got myself a copy. Maybe it was more like $75. But on September 29, 2020, I started reading it.

Now I’m on page 520. The main text ends on page 528, and there is quite a lot of back matter—the pages are numbered to 710, plus there is a poster folded in a pocket attached to the back endpaper. The book as a whole is a huge labor of love on the part of the many people who have contributed to it. As the managing editor, Steve Armstrong, puts it in his preface: “Every member of the translation committee has undertaken decades of practicing the method outlined in this book.” These people are not triflers; they mean business. They take the practice of insight seriously!

As why should they not? Insight is the great aim of Buddhist meditation. The enlightenment of the Buddha is insight into the way things really are. It’s the flip side of the coin that bears, on its other face, the meditation known as samatha in Pali or shamatha in Sanskrit: tranquility or calm abiding. The idea is that you practice samatha to settle the mind, which is habitually restless and busy, and when it settles you are able to practice vipassana or insight and see what’s really going on.

Explained thus, it seems to make perfect logical sense. But I found, in my time training and studying and meditating with the organization now called Shambhala International, that the teachings around vipashyana were not really clear. The main meditation taught there was shamatha meditation, and when the topic of vipashyana came up, I never got a strong sense of clarity about it. One thing that sticks with me is seeing, probably in person somewhere, maybe when I was at Vajradhatu Seminary in 1994 (an 11-week program in the Colorado Rockies), the main teacher of Shambhala, now styled Sakyong Mipham Rinpoche (and who, it appears, has fled to India after allegations of sexual misconduct and abuse of power in 2018—I’ve just learned about these things now!), said with a kind of apologetic chuckle about something that his subordinate teachers were saying: “What you’re calling vipashyana—that’s not vipashyana!”

It brought home to me that even senior students in this lineage were not clear about vipashyana. So I finally decided to try to get myself educated about this important dharma topic. When I discovered this book online, I felt sure it was the right thing for me at this time.

Based on my reading of this book, my understanding of vipassana is that it is cultivated by examining our experience in detail, moment by moment. What makes it “insight” is the fact that it is not conceptual: we’re not thinking about our experience, we’re just looking at it to see what it is. And if we do this, we will find that our experience has a granular quality, that it is composed of moments that come and go, one after another, without cease. The important point is that even if we already “know” this to be true, we still don’t see things this way, we don’t experience them this way. We are still relying on a conceptual way of knowing things. With the practice of vipassana, the momentariness of experience gradually becomes something directly seen rather than cognized or “known about.” And important consequences flow from that direct seeing.

I won’t go into those here; suffice it to say that along this path lies nibbana (nirvana), the opposite or antithesis of the “conditioned phenomena” that constitute our momentary experience. Along this path lies the enlightenment of the Buddha.

So here I am, nearing the end of Manual of Insight by Mahasi Sayadaw. I do feel intrigued and inspired to take up the practice of vipassana, at least as an experiment, following the instructions given in the book. Who knows, maybe, when the pandemic has subsided, I may join a vipassana retreat somewhere, for this is a popular practice here in the West. That popularity has a lot to do with the Burmese master Mahasi Sayadaw. He was a monk, and I would have a hard time believing that anyone would ever have had cause to bring any charges of impropriety against him.

You can help me create more by becoming one of my Patreon patrons for around 2 dollars.