When people die who were never born

Before we go on, please know that this post contains spoilers, specifically relating to The Old Curiosity Shop by Charles Dickens. If you haven’t already consumed as much of that novel as you want to, then stop here! After this point, you proceed at your own risk. God help you.

I’m taking care with this because I’ve just finished reading The Old Curiosity Shop myself, and the version I borrowed from the North Vancouver City Library, the Everyman’s Library edition published by Alfred A. Knopf, is furnished with an introduction by Peter Washington, opens with this sentence:

There can be few episodes in fiction more notorious than the harrowing scene of Little Nell’s death in The Old Curiosity Shop.

It appears that I’ve been living under a rock, for I never got the memo about Nell’s death in The Old Curiosity Shop. The death happens right at the end, after a long and toilsome journey on the part of the young girl (seemingly about age 11 or so) with her gambling-addicted grandfather. That was a major spoiler for me, for as I read the novel, I would normally have had every hope that Nell would find peace and safety after her trials—worldly peace and safety, that is, for we must presume that she made her way to heaven after passing from the earthly plane due to an unnamed wasting disease. So for this reader, from the start of this 555-page novel, little Nell had a cloud of doom hanging over her head. What meanies they are (or were) at Alfred A. Knopf! I note that G. K. Chesterton’s “introduction” to the novel is placed at the end of the book, as an appendix. It too contains spoilers, but they can’t really be called such when placed after the text. It’s in the right place.

So much for my micro-rant. On to the topic at hand: the death of fictional characters. Are they especially significant? Since these fictional people were never born, never drew a breath, does it matter when they die? Are there rules or guidelines for storytellers when it comes to exercising their divine power to destroy the people they’ve created?

Death and birth are life’s most significant events, and in a story the death of a character always makes a powerful statement, whether the storyteller is conscious of this or not. I believe that the death of a character implies the death of a value: something that the character embodied or stood for in the course of the story. And the more central the character to the story, the more true this rule is. For every good story means something, and everything within it also means something—its characters most of all. When a character dies, it is not just someone who has died, it is something, some idea, some value. And if this is true, then the circumstances and cause of a character’s death also take on a special importance, these being the things that have brought about the extinction of this value in the world of the story.

Little Nell in The Old Curiosity Shop is a striking character by reason of her maturity and virtue, which are powerful and unwavering from the beginning, and well beyond what most adults can lay claim to. She endures much hardship, as well as injustice inflicted on her by her own grandfather, who orders her to hand over any money she receives, and even steals from her, so that he can gamble. She and her granddad do eventually find a haven where they can live in peace and security, but no sooner does Nell get settled in than she expires. Ah, poor Nell! 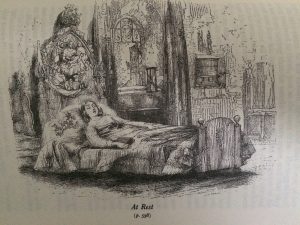 A hard life, but at least it’s over.

With Nell, a candle of virtue in the world is snuffed out. She is benevolent, long-suffering, selfless, prudent, and courageous in facing dangers for the benefit of others. She is compassionate, affectionate, and well spoken. She is honest, capable, industrious, and responsible. I think of a comment written on my report card by my typing teacher in grade 8: “I wish I had a class full of Pauls!” Well, any teacher could only write the same on Nell’s report card (and Miss Sim, wherever you are, I have made good and plentiful use of the skills you taught me; indeed, I am using them right now), and not just for typing—for Nell is a paragon.

But Nell dies. She dies peacefully, not horribly like the vicious dwarf Quilp, and presumably in good spirits (we are not made witnesses of her actual death). But her death is pathetic, coming as it does only after she has arrived at the haven she has been seeking throughout the story and throughout her young life.  As for the cause of her death, it appears to be the rigors of her journey: privation, hunger, and worry, but also anxiety for her grandfather, for whom she feels responsible. It’s all too much for her. Life has dealt her more hardship than her frame could bear, and God has decided to gather up his little representative rather than extend her term on Earth. According to the Book of Romans, the wages of sin is death, but in The Old Curiosity Shop it is virtue that receives this payment: the good characters do well, but the best character dies. Why?

I’m not sure, but my feeling is that Nell’s death serves as an indictment of the cruelty and injustice of everyday life. She is killed by a cruel world, meaning the world that you and I still live in, you and I, who, by living in it, are the very ones helping to make it cruel and keep it cruel to the extent that we do not ourselves take up the path of virtue as Nell did and make it actual in our own lives. Nell’s death is saying, in effect, “Shame on us!”

The other virtuous characters get to live on with more or less happy lives, but a shadow hangs over them all. The only way to redeem Nell’s death is to take up the standard of virtue where she fell and carry on with it. Perhaps the story is saying that if your virtue is perfect, then the world is no place for you.

So in The Old Curiosity Shop it is virtue itself that dies, and its killer seems to be neglect. Poor, powerless, unappreciated, hounded, beleaguered, and betrayed, virtue is not able to survive the harsh treatment we give it. Pure vice (Quilp) also dies, killed by its own actions while seeking to evade a reckoning for its crimes. It is as though there is enough virtue in the world to put paid to the worst vice. But the death of Nell is saying something more sobering: that there is also enough vice to put paid to true virtue. And that vice does not have a single source, but is carried in some measure by us all.