Earth at the crossroads

I’ve written before about how I’ve been an environmentalist for most of my life. The idea of keeping Earth’s natural environment in as pristine and thriving a condition as possible has always been important to me, and over the years I have viewed this issue with sometimes more and sometimes less urgency.

Since Kimmie and I watched a new documentary on Netflix recently, Breaking Boundaries, the issue has rocketed to the top of my mind. As and when you may be able to, I warmly recommend that you give this show a look. Released on June 4, 2021, the film is hosted by David Attenborough and it examines the work of a group of scientists at Stockholm University to identify the key metrics of the health of Earth’s biosphere. They have created something called the Stockholm Resilience Centre, dedicated to research on “resilience and sustainability science.” According to Johan Rockström, the professor who (I think) leads the Centre, they have arrived at a set of 9 metrics, which they call boundaries, that together give a more or less complete picture of the health of our biosphere. Breaking Boundaries introduces the viewer to these metrics, and gives an assessment of the current state of each one.

It makes for alarming—but not alarmist—viewing. Our biosphere is in perilous shape, and rapidly sliding toward the tipping points that will send us into drastic and irreversible changes to our natural environment, changes that cannot be beneficial to most of Earth’s living things, or to human society. In two or three of these boundaries Earth is already in the red zone—that is, past the tipping point. With respect to those things we’re faced with damage control rather than any prospect of improving the situation. This is the case with biodiversity, since species are going extinct at an almost unprecedented rate, and there is no known way of bringing them back from the dead. We need to slam the brakes on this process of loss.

This issue of urgency, of the shortness of time, is my main takeaway from the film. According to Professor Rockström, the current decade, the 2020s, is the crisis period. It is the 2020s which will decide whether we—that is, all of us on Earth—go over the climate cliff, or whether we pull back sharply enough to prevent the worst outcomes. Ten years from now the issue will be decided one way or another.

In global terms, in geological terms, 10 years is a short time. The post I link to at the top of this post was published almost 9 years ago. The stark reality is that we have almost no time in which to achieve the massive changes required. This is the kind of action that requires a hero: someone whose nerve doesn’t fail in a crisis. I think about a movie that Kimmie and I also watched recently: the 1979 sci-fi thriller Alien, starring Sigourney Weaver. (Spoiler alert here!) The crisis of dealing with the killer alien aboard the spacecraft Nostromo pits Weaver’s character, Ripley, against the clock not once but twice. She needs to take cool, definite, and quick action under highly adverse conditions in order to survive. Possessing the steely nerves of an astronaut, she comes up with the goods and lives to go spacefaring another day.

We on Earth need to pull a Ripley, and we need to do it now. Not 5 years from now, not next year. Now.

“But what should I do?” This is the question of the moment. It’s been my main problem with the environmental movement as a whole. I admire people like Greta Thunberg who treat this issue with the seriousness it deserves and who work tirelessly to prod governments to action. But too often I find that the communications of such people tend to be negative: presenting ever more evidence of how urgent and dire the environmental crisis is, but without giving any sense of what I might do about it. I think of it as the Chicken Little Syndrome. I don’t need more convincing; what I need is guidance.

At the risk of a more benign type of spoiler, there is some guidance in Breaking Boundaries. The three top tips:

I was surprised by the first one. I knew that trees are important, but I did not realize that planting them is the most Earth-friendly thing we can be doing right now. This doesn’t necessarily mean that we each need personally to be digging holes and placing seedlings in them, for there are many organizations that are already doing this and we can help by supporting them. I’m looking into this for myself and will report back anything I think is useful. But for a start we can be conscious and conservative in our consumption of wood and paper, and of course we can refrain from cutting down trees. 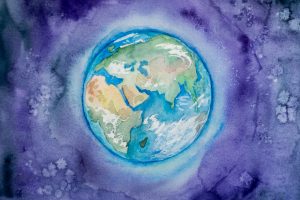 Mom not looking a day over 4 billion.

And I have a further thought on this topic—one that is not addressed in the film, and it is about the importance of the mental game. Our actions are generated by our thoughts, and I firmly believe that much else is generated by them as well: that we create our reality with our thoughts and beliefs. The Earth and its present crisis has been created by the thoughts and beliefs of humanity over the past centuries, and its healing and preservation will similarly be brought about by our thoughts and beliefs. To this end, I invite you to join me in forming and holding positive thoughts, feelings, and wishes for the Earth and all its inhabitants. The Earth is our mother; it’s time to stop abusing her and start showing her some of the love she has always shown us.

It’s crunch time. If governments do things that are positive that’s great, but we can’t leave it to them. We must, each one of us, take responsibility for changing the course of the world. I have taken that responsibility, and I invite you to do likewise. Let’s do it.