In a recent post I talked about my quest to understand why astrology appears to work. A big step in that direction was my discovery of Carl Jung’s concept of synchronicity, which he called “an acausal connecting principle” that functions in the world as a complement to physical causality. In his view, synchronicity is what connects all events occurring at any one moment, which are arising due to countless chains of cause and effect that otherwise have no relationship with each other. This connection is a connection of meaning: the witnessing consciousness that perceives the events unfolding together experiences—or anyway can experience—a sense of meaning in their simultaneous arising. Because there is no causal connection between these simultaneous events, there is no need for them to be close to each other in order for that meaning to arise. Thus, the arrival of the light from distant planets and stars, which started on its journey here minutes or years or centuries ago, is part of the meaning of the current moment when, say, a birth is taking place nearby. This, in Jung’s view, might account for the meaningfulness of astrology—might be the reason that it works. He even includes a detailed “astrological experiment” as part of his essay on synchronicity.

But while I found Jung’s ideas stimulating and encouraging and plausible, I was not fully satisfied with synchronicity as the whole answer to the apparent efficacy of astrology. So I kept searching, kept asking. As I expanded my library of astrological texts I would look for whatever hints the writers might give about the, what to call it, mechanism of astrology. For a time I studied with Brian Giles, a prominent Vancouver astrologer of the 1970s and 80s. When I asked him about how he thought astrology worked, he said, “Scientists just put one force against another force and see which one’s bigger. They don’t accept that weak forces can have a big effect!”

“So you think there is a physical influence from the stars?” I said.

I found this interesting. It seemed to mean that the quality of a force was as important, or more important, than its quantity. That would suggest that it is the nature of the energy sent by the stars an planets that accounts for its effectiveness in telling us about events on Earth. Even if the force is minute, it is significant. In this the light of the stars might be like, say, the minute electrical impulses of the human brain, which can give rise to mighty engineering works or great symphonies, despite their seemingly insignificant size. 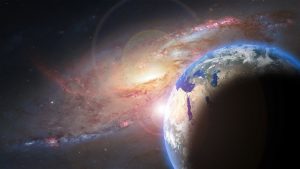 But I wasn’t satisfied with this either. The whole universe was sending these meaningful energies to this tiny planet Earth on the outskirts of a nondescript galaxy. Those same meaningful energies would of course be radiating in every other direction as well, creating infinite “astrologies” on infinite other planets in the vastness of space. If all these interactions are equally meaningful (and why wouldn’t they be?), then what you have, in effect, is a “physicalized” version of Jung’s synchronicity, where the meaning is now being carried by a physical force, in the form of the electromagnetic radiation of the stars. It’s just too complicated and unworkable. I didn’t buy it and I don’t buy it.

At this point I’d run into what felt like a dead end. I couldn’t accept physical theories to account for the effectiveness of astrology, which, as far as I was concerned, had proven itself. And the most robust “nonphysical” theory, that of synchronicity, left me unsatisfied for reasons that I couldn’t even put my finger on.

For the next 25 years or so I made no progress on this question. Admittedly, for many of those years I almost forgot about astrology as I turned to study other things. But astrology was something that I kept coming back to. From time to time I would read books, cast horoscopes, and interpret them. I got to be not bad at it. But as to why it worked, I did not get any closer to a theory of my own, that is, a theory that I could accept.

In the meantime I was developing myself as a writer. Virtually from infancy I had loved reading and writing, and by the time I got into my teens I had branched out into filmmaking. I was excited by the idea of screenwriting, and also of playwriting. I had plenty of writing talent and natural fluency, but I struggled with how to structure pieces of writing—I struggled with what I would eventually realize was storytelling. To help me out,  our family friend Harvey Burt, an English teacher and a creative writer and dramatist himself, gave me a book one day: The Art of Dramatic Writing by Lajos Egri. I found it exciting, electrifying. My education in storytelling had begun.

I believe I got that book in 1975. I was 16 years old and still scoffed at people who, like my mother, believed in astrology. It would be another 35 years or so before my education in storytelling would lead me to my own theory of why astrology works.