how astrology works, part 3: don’t do your own thing

In my last post I said that it was my study of the art of storytelling that eventually brought me to an understanding of why astrology works. Science might be able to show that astrology works—this is what Carl Jung attempted in his “Astrological Experiment,” and it was the mission of the French astrologer Michel Gauquelin—by applying statistical methods to certain objectively verifiable data, but it cannot account for why it might work. If astrology does indeed work, it would appear for reasons that are beyond the power of science to explain.

My interest in storytelling, and more generally in creative writing, led me gradually to study how to do these things. It might sound obvious that one might study something that one wishes to do, but in the 20th century the teaching of fine art, including the art of creative writing, had fallen under the spell of the 1960s catchphrase, “do your own thing,” with the result that it was thought that the teaching of technique or craft or principles in art would limit the student’s creativity. Even today, the typical creative-writing course will consist mainly of students’ critiquing each other’s work. This is the main reason that I have never formally studied creative writing. If I’m paying for instruction, I want to be instructed.

Therefore the instruction that I have received, such as it is, has come from books. This informal program of self-study got a big push forward in 2010 when I decided that I wanted to acquire a liberal education. I acquired a set of the Britannica Great Books of the Western World and started reading them. I also read books by Mortimer J. Adler, an editor of that set, and by other exponents of the tradition of liberal education. It was in one of Adler’s books that I found this sentence: “It is a knowledge of principles that elevates a knack into an art.” I found it inspiring, and I have kept it in mind ever since, turning it over and over, reflecting on its implications.

We’re all born with various knacks. I was born with a knack, or talent, for writing. I also have a talent for drawing, and, to a lesser degree, for music and acting, among other things. Growing up in the 1960s and 70s, I was indoctrinated with the “do your own thing” precept, which suited my naturally self-willed and arrogant personality.  When you have a knack for something, you can achieve results effortlessly that others must toil to achieve—if they can achieve them at all. It’s tempting to coast; and if your creed is “do your own thing,” then coasting becomes almost a duty.

But if you have a real passion for something, then coasting becomes unsatisfactory. You can’t express your love for something through coasting; you want to give effort to it; you want to improve. And here, I think, is the actual birth of the artist. At first the writer laboring under the “do your own thing” delusion will try to improve simply by writing more and reading more, maybe reading differently, more attentively. But eventually it becomes clear that this is not enough; it is still the student trying to teach himself.

So I became grateful when good instructional books came my way. But it was the notion that art, by definition, consists of a knowledge of principles that really spurred me. Among other things, I took on a new and avid interest in literary criticism, something that had not much interested me before. Now I saw it through a new lens: literary criticism is exactly a search for the principles that govern the art of writing. For the literary critic is concerned with the question, “what is it, exactly, that makes a piece of writing good?” To the extent that he can answer that question, he has elucidated a principle of the art of writing, and it will behoove the literary artist to learn that principle. 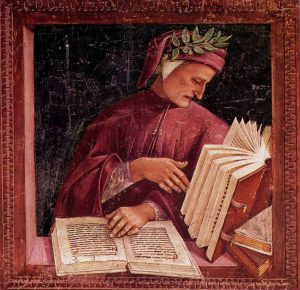 Among the literary-critical ideas that I found myself learning or relearning was the ancient idea of “polysemous” writing—writing that has more than one meaning. I first encountered the idea in Joseph Campbell’s Creative Mythology, the climactic volume of his magnificent Masks of God tetralogy:

Dante, in the Convito, was to make the point that spiritual writings “may be taken and should be expounded chiefly in four senses”: the literal, the allegorical, the moral, and the anagogical.

Dante means that in a spiritual work, such as his own Divine Comedy, any given passage can be read in four different ways, each yielding a separate and valid meaning for a separate sphere of experience. Dante makes an example of reading the first 2 verses of Psalm 114:

Consider these lines: “When Israel came out of Egypt, the house of Jacob from people of strange language, Judah was his sanctuary and Israel his dominion.” If we look only at the letter, this signifies that the children of Israel went out of Egypt in the time of Moses; if we look at the allegory, it signifies our redemption through Christ; if we look at the moral sense, it signifies the turning of the souls from the sorrow and misery of sin to a state of grace; if we look at the anagogical sense, it signifies the passage of the blessed souls from the slavery of this corruption to the freedom of eternal glory. And although these mystical meanings are called by various names, in general they can all be called allegorical, inasmuch as they are different from the literal or historical. For “allegoria” comes from “alleon” in Greek, which in Latin is alienum [strange] or diversum [different].

I found this fascinating. When I looked into it further, I learned that the idea was not original with Dante; he had inherited it from earlier writers extending back to Augustine and beyond. As far as I can tell, this idea of a 4-level “polysemous” reading of a poetic text came out of the researches of the grammarians at the ancient library of Alexandria. According to Augustine, only the Bible could support such a dense load of meaning. Dante was expanding this notion to include his own work. But if one could accept this, then in principle it would be possible to read any work this way—why not? The only question is whether meaning is there to be found. And at least in one sense, meaning is in the eye of the beholder, is it not? So let us seek; perchance we shall find.

Armed with this new idea, I started reading stories with a view to discovering these different levels of meaning. And while it’s true that not all of them support all 4 of these levels of meaning, some of them do—at least in my opinion. And when I thought further about the implications of this, I discovered some intriguing new ideas.

But those will be for future posts.