how astrology works, part 6: of planets, metals, and revolutions

In part 5 I got as far as suggesting that the connection between the placement of planets and stars in the sky and events here on Earth is not a physical one, but rather one of meaning, a meaning that rides along with the physical facts in the same way that the “allegorical” meaning of a story rides along with its literal meaning. The next question might be, how are such meanings established or discovered in the first place? Who says that when, say, the Sun is in the sign Leo, a person born at that time is likely to have self-confidence, charisma, and expressive power, and is likely to outshine his peers in the early stages of life?

The first answer here is empirical. Just as with any science, astrology has proceeded, at least partly, by the making of observations. For if there is any regularity in phenomena, then that regularity can be observed if one sets out to do so. Perhaps the greatest single contribution of this kind to the body of knowledge we call astrology was made by the ancient astronomers of Mesopotamia, who recorded the positions of stars and planets for hundreds of years and also made note of significant events on Earth that coincided with the different configurations. As far as is known, these were the first astrological “cookbooks,” and much of this data came into the hands of Aristotle, who traveled for a time with his pupil Alexander the Great when he was making his bid for world conquest. Via Aristotle, it is thought, the data made its way into other hands in the West, to augment the observational data that was beginning to be gathered there. 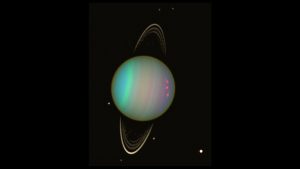 Since then, astrologers have made similar observations when new astronomical discoveries have been made. The planet Uranus was discovered in 1781 by William Herschel. Gradually, astrologers made note of events and qualities that seemed to correspond to the placements of this hitherto unknown planet. And incidentally, in keeping with the meaningful viewpoint of astrology, the name of a planet is no coincidence, but is a key to its meaning—and this regardless of how that name was arrived at.

In the case of Uranus, for example, the name was arrived at only slowly. Herschel, when given the opportunity to name the planet he had found, chose the name Georgium Sidus, Latin for “George’s Star,” to commemorate the king (George III, Herschel’s patron) in whose reign the planet was discovered. But this name did not stick. Different people floated various suggestions, and the name that caught was one suggested by the German astronomer Johann Elert Bode, who proposed it on the basis that as the planet Saturn, which had been thought to be the farthest from the Sun, was named after the father of Jupiter, the planet next in, so the next planet out should be named in turn after Saturn’s mythical father. And thus the name Uranus. One of the people who supported this alternative name was Martin Klaproth, the German chemist who in 1789 named his newly discovered element uranium in honor of the new planet. As Wikipedia notes:

As the planet gathered its name to itself, astrologers would look to the symbolism of that name: who was Uranus? what were his qualities? what did he do? Uranus is the Latinized spelling of the Greek Ouranos, who was a sky-god, or in fact was simply the sky personified, since he had few human attributes. For example, he had no father, according to the poet Hesiod, but was engendered solely by Gaia, Mother Earth. So Uranus, the astrological planet, magnetized the symbolic attributes of the sky: clarity, spirituality, and also storm and lightning.

In 1781, the year of Uranus’s discovery, the American Revolutionary War was in progress, erupting from a growing international ferment of feelings of egalitarianism and a yearning for liberty. These qualities would come to be closely connected with Uranus in astrological symbolism. And, along the same lines, in 1789, the year of the discovery and naming of the element uranium—Uranus’s metal—George Washington was acclaimed the first president of the United States, and the French Revolution was launched under those same Uranian impulses of liberty, equality, and fraternity.

In time, as every planet in astrology is associated with a sign, Uranus came to associated with the sign Aquarius, and is now designated its “ruler.” Previously Saturn was said to rule Aquarius, a chore it divided with its rulership of the sign Capricorn. Some astrologers still regard Saturn as a secondary ruler of Aquarius, but all now see Uranus as the primary ruler of that sign. (This question of rulerships in astrology is crucial, for it determines which planets and which signs affect which things on Earth.)

So much for empirical observation as a key to discovering astrological meanings. But there is a further, deeper key to these meanings, which I thought I would be able to cover in this post. However, I’ve said enough for today, so I’ll have to leave that for next time. We’ll be moving into the realm of metaphysics, so I don’t know whether my powers will be equal to the task. But I welcome you to stop by and find out.

email
This entry was posted in astrology, thoughts and tagged Aquarius, astrology, how astrology works, uranium, Uranus. Bookmark the permalink.