how astrology works, part 7: the mysteries of number

In part 6 I looked briefly at one aspect of where astrological “meanings” come from, namely the empirical approach of making observations of the world in the light of the symbolism connected with the named planets and signs. Taking the name as a given, the astrologer looks for a correspondence between the meaning of that name, as for instance the name Uranus as the Greek sky-god who was the father of Saturn (to use their respective Latin names), and events on Earth. When the position of Uranus came to be tracked and recorded, astrologers could plug the planet into horoscopes and see what it did. 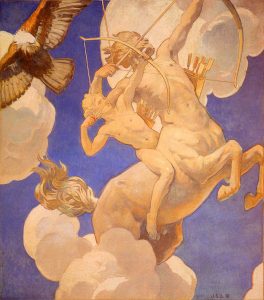 I have seen this process unfold in my own lifetime with the planetoid Chiron, which was discovered in 1977. (Looking in Wikipedia, I see that now the object is officially named 2060 Chiron.) I remember in the 1980s, when I was studying astrology, reading astrologers’ thoughts on how to interpret this new celestial object. It was discovered by Charles Kowal, an American astronomer at the Hale Observatories in Pasadena, California, and it was he who named the new object Chiron, after the king of the centaurs of Greek mythology. Within an hour or two of the announcement of the discovery, Kowal received a phone call from New York astrologer Joelle Mahoney asking him the exact time of day when he first realized that his photographic plates were showing him a new planet. He recalled that it was 10 o’clock in the morning of 1 November. Mahoney cast a horoscope for the discovery, and determined that the sign Sagittarius—the centaur—was rising at that moment. This was before the planetoid was named, but the first symbolic connection had been made.

Astrologers around the world got busy working on the question of how to interpret the new planetoid. It seemed obvious to connect Chiron with the sign Sagittarius; indeed, some complained that the sign already was Chiron, and that giving a planet that name was astrologically redundant. But at the same time some saw a connection with the sign Virgo, because Chiron’s name derived from the Greek for “hand” (his name means, in effect, “the handy one”), and Virgo has some rulership over the hands, and more direct rulership over human skills in general—and it was this quality of skillfulness that really gave Chiron his name. For he was renowned for his knowledge (he was tutor to Achilles, Jason, and Perseus, among many others), especially his knowledge of healing—and medicine is ruled by Virgo. There was irony in this, for Chiron was accidentally shot with an arrow poisoned with Hydra’s blood, which was invariably fatal; but because Chiron was immortal, he could not die, so he suffered with an incurable wound until he finally voluntarily gave up his immortality in a bargain that freed Prometheus from his endless torment on a rock in the Caucasus Mountains.

So there is a rich nexus of themes here: wisdom, study, healing, tutelage, foster care, and self-sacrifice. Astrology makes use of all of these meanings, but the one that stands out, as far as I know, is the meaning of “wounds that don’t heal,” or perhaps “the wounds that make us wise”: this is what a contemporary astrologer might be looking for when noting the placement of Chiron in a horoscope and relating it to a person’s life. As it happens, Chiron is prominent in my own birth chart—something that could not have been known when I was born in 1959—and I think that its influence is visible in my life, especially in that I have devoted much of my life, and continue to devote it, to study. As for wounds that don’t heal—well, maybe another time.

But I wanted to get to the deeper question of where astrological meanings come from, beyond the empirical observation of the connections between the world and the mythological symbols in which astrology is expressed. That deeper, more metaphysical source of meaning comes ultimately from numbers. At its bottom, astrology is a form of applied numerology.

And what is numerology? The foundation of it goes back, in Western society anyway, at least to the teachings of the Greek philosopher Pythagoras, who lived in the 6th century BC. Instead of focusing on the mathematical behavior of numbers, he focused on their significance, their meanings. He looked at their qualitative aspect rather than their quantitative aspect. And while no writings of Pythagoras have survived, his thinking was a key source in the later philosophy of Plato.

What does it mean to talk about the qualities of a number? There’s an excellent and accessible discussion of this in John Anthony West’s book Serpent in the Sky: The High Wisdom of Ancient Egypt. West, a maverick American scholar, is a student of the esoteric knowledge of ancient Egypt, especially as this was explicated by the French Egyptologist and occultist R. A. Schwaller de Lubicz, who spent his career making detailed measurements and studies of Egyptian temples. He was able to show that they were built according to a complex and profound geometrical scheme, which resonated with the metaphysical depths of Egyptian mythology. And much of this metaphysics was based on a philosophy of number. In the words of John Anthony West:

Numbers are neither abstractions nor entities in themselves. Numbers are names applied to the functions and principles upon which the universe is created and maintained.

In his book West walks us through some of the meanings of the natural numbers 1 through 9. The number 1, for example, represents the absolute, or unity. It cannot be cognized directly, because to do so requires that the duality of knower and known already exists. Unity, then, is a kind of implicit origin of all things, the wellspring, the source. Somehow, out of unit, multiplicity arose, perhaps like a cell dividing in mitosis. This metaphysical division Lubicz gave the name Primordial Scission: 1, in effect, became 2.

And 2 is the number of polarity, which is fundamental to all phenomena. Anything that is, is identifiable only in distinction to what it is not. The world is filled with polarities—light and dark, positive and negative electric charge, male and female—but these are specific instances of the principle of polarity, which is what the number 2 represents. To quote West again:

Two, regarded in itself, represents a state of primordial or principial tension. It is a hypothetical condition of eternally unreconciled opposites. (In nature, such a state does not exist.) Two is static. In the world of Two, nothing can happen.

In order for things to happen, the poles represented by 2 have to come into relationship with each other. There has to be a mediating principle between them; this principle is represented by the number 3. It is expressed somewhat in the Hegelian dialectic of thesis-antithesis-synthesis, where it is the third term. But even this is more a specific instance of the deeper principle which 3 represents.

With the number 4 we arrive at the principle of substantiality—giving form to the developing reality. West uses the example of lovers: if the lover is 1 the beloved is 2, and the desire between them is 3, then we still have not arrived at an actual relationship; it still remains only possible. When the lovers begin their affair, then that possibility has become an actuality—it has taken on substance. Again, 4 does not represent actual physical materiality—that comes later—but only the principle of substantiality.

As I’ve mentioned, West goes on to sketch the meanings of the first 9 numbers, leading up to the number 10, which was held to be especially sacred by Pythagoras (who, incidentally, was reputed to have studied extensively in Egypt). Each number adds more to an understanding of the principles underlying our experience, of how the world works. By the time you get to 9 or 10, the system has become subtle, complex, and dynamic. But there’s a good metaphysical argument that you haven’t completely done an analysis of the principles of the world until you get to 12. Only at 12 have you completely symbolized all of our ways of cognizing reality.

But 12 is the number of signs in the zodiac; and it turns out that this is no coincidence. For 12 contains a much greater richness of arithmetical and geometrical relationships between its component numbers. And when you arrange these numbers in a circle as a expression of that completeness, you have the zodiac. Each number, each zodiacal sign, again represents some fundamental principle of reality, of the universe as we experience it. And it will turn out that the qualities of each sign derive from its unique placement in that circle and its unique set of relationships with the other signs and with the whole.

But more on that later.