how astrology works, part 8: “all meaning is an angle”

I intend to conclude my brief exploration of the “mechanism” behind the effectiveness of astrology with what I hope will be my deepest thoughts on the workings of number. For, as I said in my last post in this series, astrology is founded ultimately on number; it is in some way a system of recognizing the meaning of number in our experience. 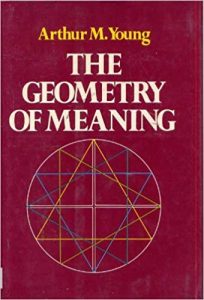 Back when I used to shop for books in the bricks-and-mortar world, one of my favorite stores was Banyen Books, a store in Vancouver’s Kitsilano district specializing in spiritual and New Age books. I think my first purchase there was at its original location on 4th Avenue near Macdonald Street in 1977 or 1978: I got myself an ephemeris so that I could cast horoscopes for myself. In March 2000 I was browsing the store at its newer location at Broadway and Macdonald, and my eye was caught by an intriguing-looking brick-red paperback called The Geometry of Meaning by one Arthur M. Young. The cover illustration was simply of a circle partitioned by four inscribed equilateral triangles, making the circle look much like the frame of a horoscope. I picked up the book and discovered that while it contained geometrical diagrams and even physics equations, it was actually a work of metaphysics. With excitement I realized that it appeared to be a modern (published in 1976) addition to the Pythagorean approach to number theory. I shelled out the relatively exorbitant $22.50 price and took the book home.

I had never heard of Arthur M. Young. By profession he was an aeronautical engineer, inventor of the Bell helicopter, but his education was in mathematics In 1952 he apparently left aeronautics, for he established the Foundation for the Study of Consciousness, which published a journal with the same name. His aim was “the development of a science of mind/body interaction.” This book, The Geometry of Meaning, appeared to be a distillation of his mature thought on the relationship between number and experience.

All right: and what is that relationship? Young launches his book with this quote:

“All meaning is an angle.”

In his next sentence he admits:

I don’t know where I first encountered this enigmatic statement. I do recall that its origin was said to be in ancient Egypt, and I draw great comfort from this confirmation that there was at one time, perhaps so long ago that it was not even registered by Greek thought, a tradition that reflected the same conclusions I have reached after a lifelong effort to formulate manings without reverting to the circularity found, for example, in dictionary definitions.

For my part, while I can’t affirm that Pythagoras and his followers arrived at the “same conclusions,” it does seem to me that Young’s ideas are in that tradition of Greek thought. And for his own part, Young says:

I would like to call this book an essay in philosophy . . . . but in the older sense of “the science which investigates the facts and principles of reality.”

We hear an echo of John Anthony West’s definition of number as not merely a quantity but as a symbol of “the functions and principles upon which the universe is created and maintained.” And for Young, philosophy “also deals with the relationship between the knower and the known.”

After this introduction, Young begins by discussing what he calls the fourfold division of the “categories of knowing.” For while we might first think that there are just two aspects to any moment of cognition—a known object and its conscious knower—Young finds that four aspects are required for a more complete description of that moment. There is, in the first place, the known or perceived object; then there are the sense-data by which the object is perceived; then there is the knower or perceiver of the object; and finally there are the qualities or opinions projected by the perceiver on the object. This last category includes such judgments as whether the object is good or bad, beautiful or ugly, useful or useless.

A similar and related fourfold way of breaking down an experienced situation is Aristotle’s system of four kinds of cause: formal, material, efficient, final. Using the example of a table, the table can be regarded as having four different kinds of cause:

These are all causes of the table in the sense that they all, generally speaking, answer the question, “Why does that table exist?” It exists because this carpenter, wanting a table for his breakfast nook, designed it, got the wood, and built it. It provides a complete account of how the table came to be. The point of interest for Arthur M. Young is that this account has exactly four aspects—not three, not five.

So a complete description of the arising of any object or any cognition has exactly four aspects. Young finds that these four aspects can be sorted according to whether, on the one hand, they belong to the object (in which case he calls them objective) or to the subject (in which case he calls them projective), or, on the other hand, they are specific or general. These are two pairs of opposites. The relationship of opposition is expressed spatially, geometrically, as the relationship of diameter: in the boxing ring, the opponents stand face to face. When the second opposition is added to the depiction, it takes its own place at the maximum distance from the first opposition, namely, as another diameter at 90 degrees from the first, thus quartering the circle like the crosshairs in a telescopic sight. The tensions within the fourfold way in which reality is cognized or experienced has been given a geometrical expression in the form of a quadrated circle.

And we begin to sense the significance of the ancient dictum that “all meaning is an angle.” For the expression of an opposition or polarity as the diameter of a circle is entirely valid: the meaning of the opposition is preserved in the geometrical representation. It’s another way of saying the same thing.

(As an aside, my own intuition tells me that this fourfold way of cognizing is also the pattern underlying the four levels of meaning in a literary work, as I have discussed before.)

By way of foreshadowing, I’ll note for now that this quadrated circle, with its inner polarities of objective and subjective, self and other, is already an elementary horoscope, in which a circle representing the whole world at a given moment is cut by two diameters: the horizon line running running from east to west, and the axis line running from zenith to nadir. These two lines, and the four points of the sky that they specify, form the frame of a horoscope, on which all the other elements will be hung.

We’ve come a long way, but we’re still not quite done, for the fourfold division is way of understanding only relatively static situations: single objects or cognitions. When change enters the picture—and all of our experience is continuous change—then more is required. I’ll get into that in my next installment.