the inventiveness of creators, from Homer to my aunt Jackie

As I’ve mentioned, I’m currently rereading Robert Fagles’ translation of Homer’s Iliad. In my last post, I talked about some thoughts sparked by a recent article in Archaeology magazine, in which the archaeologist Barry Powell conjectures that Homer himself may have had a role in inventing the Greek alphabet. The great innovation of the Greek alphabet, over the Phoenician alphabet on which it is based, is the addition of vowels. How did they come up with this idea? The Archaeology article, written by Eric A. Powell (no relation to the archaeologist, as far as I know), notes simply that the “Phoenician alphabet, with its lack of vowels, was not up to the task of preserving Greek hexameter.” My own thought was that inventiveness of poetry makes it too hard to read without the vowels: the unexpected language and imagery makes it too hard for a reader to guess the words; or sure comprehension, they must be completely spelled out, including vowel sounds.

This is an interesting idea by itself, but I’ve had some further thoughts. One is about the mystery of how Homer could have created such long, epic works as the Iliad and the Odyssey as purely oral poems—that is without an already existing alphabet. For Homer, thought to have lived and worked in the 8th century B.C., was in the tradition of professional bards, who would perform for aristocratic audiences at feasts or, perhaps, as part of civic games. But these poems are far too long to be sung in a single sitting. If the whole poem were to be performed, it would have to be done over many evenings. Indeed, I think that the existing “book” structure of the 2 poems probably corresponds to their performance format, with one book (what we would call a chapter) being performed in each session. The Iliad, for example, is made up of 24 books; to me this looks like a series of 24 separate performances to sing the whole poem.

But why would a bard create a single poem that took 24 evenings to perform? What gave him the idea to do that? It seems to go against the idea of a single performance for a work.

So my thought is this: what if the Iliad, say, was not a single poem before the invention of writing? What if Homer simply had a number of separate poems about different episodes relating to the Trojan War and the wrath of Achilles? Each of these was the length of a single performance—a single “book,” in literary terms. These separate poems still had all the excellent qualities of Homer’s poetry, and would be worth setting down using the new technology of writing. In the course of setting them down this way, though, they would, for the first time, take a fixed form—for all poetry of the Homeric era was improvised for each performance, and the “same” poem would never be exactly the same on any 2 performances. And this fixed form, allowed and indeed necessitated by their translation into writing, would give rise to the issues of editing or perfecting the poems—making sure that it was their “best” form that was being captured for posterity—and of ordering them. The idea might be that if the poems are to be kept together and stored together in written form, then there might also be a notion that there is a “best order” in which to perform them, read them: that they could and should be arranged to tell a broader story, with its own beginning, middle, and end. And only here was truly born the epic.

For example, right now I’m reading book 17 of the Iliad, “Menelaus’s Finest Hour,” in which the Argives and the Trojans fight over possession of the dead body of Achilles’ dear friend Patroclus, who has fallen in battle. It’s not hard to imagine, in a culture for whom the Trojan War and its many episodes were already a well-known topic, that this book could form a separate poem on its own. But it seems to me that when all of Homer’s episodes were set down in this way, it would be natural for the poet to go over them all with an eye (although he was blind) to putting them into temporal order, smoothing out their inconsistencies, and getting them to flow so that one follows the next naturally and dramatically. 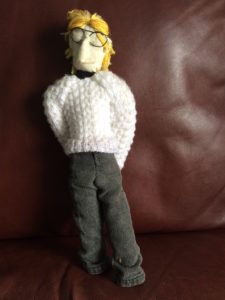 The poet turns a number of separate episodes into parts of a single whole, and this single whole is a new work of art in its own right: it is an epic.

I believe that the components of the Iliad and maybe the Odyssey existed before the introduction of writing to Greece, but that they were turned into epics, into unitary works of art, by that selfsame introduction. The new technology gave the poet a new tool and expanded his range. To me it makes perfect sense.

And while I’m on the topic of the Iliad I want to share something else too. One of my aunt Jackie’s curious talents is to make doll likenesses of people she knows. In 2001, on my 42nd birthday, I opened a birthday present from her and found a little knitted image of myself in the box! 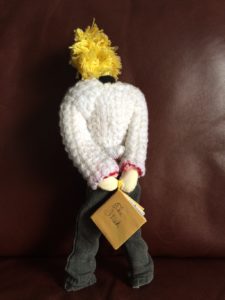 It struck me as hilarious and I laughed harder than I’d laughed in my whole life up to that point. Believe me, it’s quite an experience to unexpectedly find a doll of yourself staring up at you.

But, it being a true likeness, the doll had his hands clasped reflectively behind his back, and from those hands hung a little book. And the handwritten title of that little book? The Iliad.

Was the doll artist receiving some precognitive intuition of my future connection with this primal epic? I’ll leave that for you to consider. Meanwhile, enjoy the doll.

email
This entry was posted in thoughts and tagged alphabets, Archaeology magazine, dolls, epic, Homer, the Iliad. Bookmark the permalink.