why vowels cost money on The Wheel of Fortune

Since I’m creating an epic (The Age of Pisces), I want to learn all I can about the epic form. What is an epic, exactly? What features turn a non-epic or sub-epic into an epic?

This is a matter of opinion and scholarly debate. And lately the ground has been muddied by the shanghaiing of the word epic to join the slang vocabulary (“it was an epic dental appointment!”). My fear is that the word will be trampled and stretched out of recognition by such use; then what will we use for real epics?

Ah well, all out of my control. I’ll stick with the word in hope that it will survive its ordeal in popular culture.

The word itself comes from the Greek epos, meaning “word, speech, or poem.” And the form of the epic was launched, in the West anyway, by the Greek poet Homer with his 2 great works, the Iliad and the Odyssey. Currently, just as I’m rereading the Bible (as I mentioned in my last post), I am also rereading the Iliad. 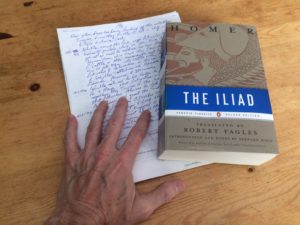 I bought my copy in January 2008 along with its companion volume the Odyssey: the handsome Penguin editions translated by Robert Fagles. I read both of them not long after—probably within the next year or two. But now, with my new focus on epic as a form, it’s time to go back and read them again. I’m just over halfway through the Iliad, and I’m enjoying it very much.

These poems have been studied intensively over the centuries. At the Library of Alexandria, founded by Ptolemy I, a general of Alexander the Great, or possibly by his son, Ptolemy II, in the 3rd century BC, the largest section was devoted to works on Homer’s poems (the second-largest section was devoted to the works of the lyric poet Sappho). The Iliad and the Odyssey were studied with the zeal and attention that would be lavished, centuries later, by Jewish rabbis and by Protestant scholars on their respective Bibles. The Iliad and the Odyssey were, in effect, the Bible of the pagan world. To name one biblical feature, these poems were used, as the Bible would be used, for the oracular practice known as sortilege: if one had a decision to make or a problem to solve, one could open one of these books at random, drop one’s finger on a page, and read out the verse pointed to. That verse would be the answer to your problem. Bernard Knox, the Homer scholar who provides the introductions to both of these Penguin books, describes doing just this himself while he was a soldier in World War II.

But recently I came across some interesting new information about Homer’s works that got me thinking for myself about these books and about the epic form.

It was while reading the May/June 2017 issue of Archaeology magazine. The article was “When the Ancient Greeks Began to Write” by Eric A. Powell, and it looked at research into the origin of the Greek alphabet. I knew that the Iliad and the Odyssey were first written down in the 8th century BC, only shortly after the alphabet was introduced, or, perhaps better, reinvented, in Greece. The Greeks derived their alphabet from that of the Phoenicians, with whom they had trading relations. The Phoenician alphabet was a Semitic alphabet, like Hebrew, and, like Hebrew, it lacked vowels. Writers in these languages had to use workarounds to suggest vowels sounds. When the Greeks created their own alphabet, they added vowels, and thus made it possible to represent any spoken word in writing. A reader would be able to sound out a word, rather than having to guess what it was from its context, as often happened in writing without vowels.

One researcher mentioned in the article, Barry Powell, has a theory that the Greek alphabet was invented specifically for the purpose of recording Homer’s works. He even thinks that Homer himself may have been behind that invention, or even the inventor himself. (Powell recognizes that he will probably never be able to prove this.)

The idea struck me. I had read somewhere else recently—on Flipboard, I think—that the oldest written records in Mesopotamia are all administrative in nature: accounts, receipts, contracts. Those researchers were proposing that it is the need for such records that was a driving force behind the invention of writing. At some point, in city life, transactions become too numerous, too big, and too complex for people to remember; they need to be written down. Only when such administrative needs are being met by writing do people start turning their minds to other uses of the written word, such as setting down poetry.

If that is so, then it would seem unlikely that the Greeks invented their own alphabet in order to write poetry; they were civilized and would have accounting needs like others, which would call for written records.

According to the Archaeology article, current evidence points to the island of Euboea as the specific location of the invention of the Greek alphabet:

According to Powell’s theory, one person, probably a Greek-speaking Phoenician, was commissioned by wealthy Euboeans with access to papyrus to take dictation from the most famous poet in Greece. . . . The Phoenician alphabet, with its lack of vowels, was not up to the task of preserving Greek hexameter, so this scribe—Powell calls him the “Adapter”—needed to invent vowels from existing Phoenician letters.

After all, when you’re writing receipts and contracts, the language tends to become standard, and indeed eventually turns into boilerplate: stock phrases, sentences, and whole paragraphs. Words are relatively easy to guess from the context. In the shepherd’s contract with the temple, shp means “sheep,” not “ship” or “shape” or “shop.” But poetry is different: here the language is creative, unexpected, and rich in figures of speech. Even with context, it would be easy for a reader to make mistakes; and the better the poet, the more mistakes would be likely, because the poet’s imagination and powers of invention are greater.

To me, this strengthens the argument that the Greek alphabet was invented to record the works of Homer—or even by Homer himself. I find that idea appealing and exciting. If Homer was involved in the invention of the Greek alphabet, and especially with the invention of vowels, then his genius was great indeed. For vowels were a brilliant and liberating innovation. Every time a vowel is sold on The Wheel of Fortune, he should be getting a royalty.

These musings led me to  further insights about Homer and the epic, but I’ll save those for next time.