the Iliad of Homer: first epic of the West

The Iliad by Homer
My rating: 5 of 5 stars

Western literature kicks off with the clash of civilizations.

Crafting an epic of my own, I got the idea of exploring the great epics of Western literature in more detail. They are all to be found in my set of the Britannica Great Books of the Western World:

However, I read not the Great Books version, a prose translation by Samuel Butler, but rather the verse translation by Robert Fagles, published in a lovely paperback by Penguin Classics in 1998. I bought it in January 2008 along with a companion edition of the Odyssey, also translated by Fagles, when I saw them together in a bookstore. I probably read it not long after I bought it, and that was my first time through the whole work (I had attempted a prose translation by W.H.D. Rouse when I was in grade 10, but abandoned it before I got too far). So this time through marked my second reading of the famous poem.

It took me 2 months to read. My method, as with reading any poetry, was to read it aloud. But, more than that, I also wanted to record the story of the Iliad, its actual episodes; so I also wrote my own prose summary of the action as I went along, noting down each episode after I’d read it. Each morning I would type the handwritten notes into a Word document. So now I have my own summary of Homer’s poem, based on my 60 pages of notes. That will help me when I want to refresh my memory as to the actual story of the poem, and if, as I hope to do, I engage in any analysis of the story. The process of writing down the episodes also had the effect of causing me to pay closer attention to what I was reading, for as I wrote my notes I would have to go back and check to make sure I was getting things right, and the action of typing them the following morning further consolidated my acquaintance with the events of the story.

And what is that story? In brief, it’s the story announced by the title of book 1: “The Rage of Achilles.” The opening word of the poem is rage, and the massive poem, about 540 pages, derives its unity from following the emotional journey of Achilles, the Greeks’ (or the Achaeans’, as they’re mostly known in this work) best warrior. Achilles’ nose is put out of joint early on when the expedition commander, Agamemnon, pulls rank on him and seizes certain spoils of war that Achilles had claimed for himself, in particular a beautiful woman named Briseis. Achilles throws an immense snit and retreats to his own compound to brood. Now, no matter how badly things go for his fellow soldiers, nothing will draw him back into the fray. Only the prospect of restoring his damaged dignity can possibly rouse him. Until then, he and his men, the Myrmidons, sit out the fight, idling by their beached ships while their countrymen fight and die on the plain outside Troy. He has his dear friend Patroclus to pass his days with and help him nurse his wounded ego.

Meanwhile the Achaeans are in tough fighting the Trojans, who are led by their own top warrior, Hector, the most beloved son of King Priam. And Hector is proving to be a handful for the Achaeans, who number among them such formidable fighters as Odysseus, the brothers Ajax, Diomedes, and the dead-eye archer Teucer. Again and again we witness the vicissitudes of battle, as soldiers filled with fighting fury press the attack, only to have things turn against them and send them scrambling in terror for their lives.

In large part this is because the fortunes of war are not up to men alone. Homer shows us how it is the active involvement of the gods that is the decisive factor. The original cause of the war is alluded to but never explicitly discussed by Homer: Priam’s son Paris, ordered to choose which of 3 goddesses was the most beautiful—Hera, Athena, or Aphrodite—chose Aphrodite because she promised to give him the world’s most beautiful woman. That woman was Helen, who happened to be the wife of Menelaus, king of Sparta. Paris made off with Helen and a shipload of treasure from Sparta, and Menelaus did not take this affront lying down: he assembled a coalition to launch an expedition against Troy to recover Helen and to punish the Trojans. When Paris chose Aphrodite, he made enemies of Hera and Athena, and those gods with whom they were connected or allied. Aphrodite, naturally enough, took Paris’s part in the dispute. It turns out that the 2 sides have roughly equal divine backing, with Hera, Athena, Poseidon, Hermes, and Hephaestus helping the Achaeans, and Aphrodite, Apollo, Ares, Artemis, Leto, and the River Xanthus helping the Trojans. Zeus, father and king of the gods, does not formally take sides, but his heart is with the Trojans, who have long offered him superb sacrifices. His private residence is on Mount Ida, near Troy. Although Zeus does not take part in the actual fighting, he is called upon to intervene in one way or another at various points. In particular, the war down below is echoed in his own marriage with Hera; with them we witness a divine marriage in trouble, and have to wonder whether immortality and wedlock are meant to coexist.

I started off by mentioning the clash of civilizations; it seems significant that Troy is in Asia (not far from modern Istanbul). For while the Trojans are portrayed as speaking the same language and paying worship to the same gods as the Achaeans, they are also presented as an alien culture. For while the Achaeans all come from cities in their own lands, theirs is a warrior culture: the status of its men is built up almost entirely around prowess in battle. And while they appreciate and enjoy wealth, it is always portrayed as won in combat or in competitive games, or perhaps received as gifts of friendship. In contrast, Troy is depicted as a wealthy city, but one whose wealth has been earned through trade. Warriors have always despised trade, and indeed the definition of a nobleman in Europe has been, from earliest times, one who makes his living by the profession of arms. Tradesmen produce wealth, warriors seize it from them; their relationship is that of predator and prey. For a warrior to turn into a tradesman would be like a wolf turning into a sheep—a humiliating transformation.

The Asians are thus seen here as effete and inferior. Indeed, Paris’s act of absconding with Helen and other of Menelaus’s possessions was a perfidious crime motivated by the unseemly passion of lust. His behavior is degenerate, perverse, and, well, unmanly. It was . . . Asian.

And yet Troy is civilized. Hector, while the greatest warrior among the Trojans, is also portrayed as a family man who treats his wife and son with tenderness, and who also, almost alone among his countrymen, shows kindness and compassion to Helen. There is a sense here of a rich, cultured society, one that this reader would have liked to glimpse more of, while the Achaeans remain mostly blustering alpha males, thin skinned and jealous of their honor.

The role of fate in the story is subtle and complex. Both men and gods seem to feel somewhat oppressed by fate, when they’re aware of it, but at the same time they are worried about doing things that go against fate or violate it. It leads one to wonder what fate is exactly, or anyway what Homer’s conception of it is. Achilles, for instance, knows that he’s fated to have a short but glorious career. No doubt this knowledge contributes to his sense of outrage when Agamemnon takes his trophies from him. Even Zeus worries about the designs of fate being upset, and takes action to prevent that from happening, even as he also sometimes muses about allowing it to happen.

In all, I enjoyed this second reading of the poem very much. I became more familiar with the large cast of characters, getting past the “blizzard of names” problem. 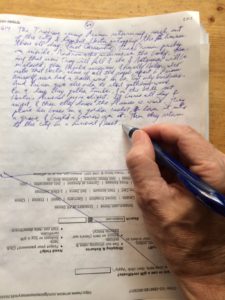 Putting the finishing touch to my own masterpiece

I tried not to rush. I find that I am always conscious of how many books there are to read, even how many Great Books, and this consciousness creates a subtle pressure to try to tick off the items on my reading list, and thus reduces my involvement with the works. I’m like a tourist with an itinerary, more concerned with checking off “Louvre” and “Notre Dame” than with appreciating them for what they are. Hence my 2-month sojourn with the Iliad.

I haven’t talked about some of the things I really wanted to talk about, such as Homer’s unflinching and harrowing depictions of battle. Homer tells you where the spear went in, what organs it pierced, and depicts the dismay and agony of the dying man as darkness covers his eyes and he flies away to the House of Death. There is a strange conjunction of nonsensicalness and inevitability hanging over the battlefield. And I wanted to mention that the Iliad is not an account of the whole Trojan War, but just a turning point that occurs over a very few days. It really is just about the rage of Achilles.

If you haven’t read the Iliad, then I want to say that it’s more approachable that you might think, certainly in this translation. It’s a real story, told by a real storyteller, one celebrated as among the greatest of all time. Bernard Knox’s introduction is fantastic and not to be missed. He helps get your mind into the right frame to get the most out of Homer’s first epic.

OK. Next: the Odyssey.