If I have a sudden desire to investigate or study something, I try to act on it. I trust that the desire is coming from a good place, even if I don’t know exactly where that is or why it is drawing me.

When I got my set of the Britannica Great Books of the Western World in 2010, and saw the list of 102 Great Ideas, I was intrigued to note that one of them was Virtue & Vice, and that 6 others were specific virtues and vices:

Out of 102 Great Ideas, at least 7 are in some way concerned with the issue of virtue and vice—almost 7%! I found this curious, since virtue and vice seemed to me to be old-fashioned terms, echoes of a bygone age of prudish piety. When I read the essays associated with these ideas, I came to think differently. We’re every bit as concerned today with good and bad, and how our own and others’ behavior rates when considered in the light of these basic categories.

Then along came some writing texts by Angela Ackerman and Becca Puglisi, specifically The Negative Trait Thesaurus: A Writer’s Guide to Character Flaws and The Positive Trait Thesaurus: A Writer’s Guide to Character Attributes, both published in 2013. The authors use the terms character flaws and character attributes, but I think these are essentially the same as vices and virtues, for my Webster’s gives these definitions:

The Great Books discuss only a limited list of the major virtues (and their corresponding vices), but Ackerman and Puglisi’s books, seeking to provide aid to storytellers, contain much longer, more detailed lists. For example, The Negative Trait Thesaurus list begins with these entries:

The total list comes to 106 entries. The Positive Trait Thesaurus begins with these:

And the total list here comes to 99 entries. Both thesauri have further lists of synonyms in the back, which direct the reader to the main entries. These books are a great resource, and I recommend them to any storyteller. They will get you thinking about character in fruitful, productive ways.

The authors note that they did not actually comb the dictionary to find and list every character flaw and attribute; they were looking to get the most important ones. The implication was that it is too tedious or not sufficiently rewarding to go all the way through the dictionary looking for these traits. And this got me wondering: how many of these traits are actually in the dictionary, actually in our language? 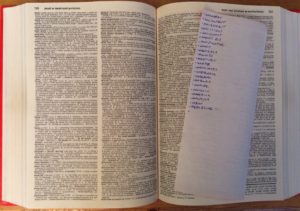 The things you find in the dictionary

I decided to find out. A few weeks ago, I amended my afternoon reading period to include a segment with my Merriam-Webster’s Collegiate Dictionary, in which I pore over it page by page, looking for positive and negative trait words. I do about 20 pages a night, which takes me around 20 minutes. I’ve been at for about a month, and am about halfway through—in the Ms. It is a bit tedious, but also interesting. It’s not a rigorous comb-through, it’s even a bit arbitrary. But doing it is getting me thinking about virtue and vice in a different way.

For one thing, I find that a pragmatic definition of virtue is arising—something like:

a trait or habit that leads toward a good, and that is capable of being deliberately strengthened or suppressed

By the same token, a vice would be:

a trait or habit that leads away from a good, and that is capable of being deliberately strengthened or suppressed

And for the sake of comparison, here are the first entries on my own list, which consolidates virtues and vices, so I will give the first 14 instead of the first 7:

I’ve made many quick judgment calls. Is adamant really a trait, or is it more of a behavior with respect to a particular situation? When I waver, my policy is to include the word; I can always throw it out later.

What will I do with this list, once I’ve got it? I’m not sure. I was curious enough to create it, so I will just see where that leads. I suspect that I may start developing my own theory of virtue and vice, and possibly looking for ways to apply that theory to storytelling. It’s already fun to imagine characters that embody these traits. What if you had to build a character based on 3 consecutive traits from the list? What would a character be like who was active, acute, and adamant, for instance? Unusual things spring to mind.

So there is a glimpse of one thing going on in this writer’s mind and world. Where will it lead?