I’ve been writing for a long time, and I do it professionally, but nonetheless I regard myself as a student of the craft rather than some kind of master of it. So if you’re a writer, or perhaps a deep and inquisitive reader, then I would like to share what I’ve managed to learn of the craft so far, student to student, if you will. I won’t be able to put it all in one post, but let’s see how far I get with this one.

I have long felt that character creation and portrayal has been one of my weak points. It’s not that I’m bad at it or untalented; rather, I think that I have relied on my talent—that is, my instincts—rather than on a knowledge of the craft of character creation. My perceptiveness about people and my knowledge of psychology powered my character portrayals up until maybe 10 years ago, when I started studying the craft more seriously. 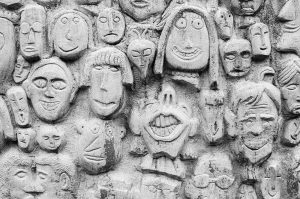 This sculptor works in the ironic mode

My major work in progress is The Age of Pisces, an epic. How do I handle character development for it? There are a lot of characters, including 5 point-of-view characters (at last count). And it’s not a perfect textbook case, for I am developing characters that I first began working on as long ago as 2002, so there has been a long process here where the characters have grown and evolved in my mind along with the story. That process is still happening. But I have developed a methodology—one that I’m still working on—for creating characters, and I’ll share my thoughts on that.

First of all, there are 2 important considerations that affect the way characters should be handled for any given work. These have to do with the kind of work it is—and by this I refer not to the genre of its story, but to factors which are antecedent even to that. One is what could be called the story’s level. Northrop Frye, in his Anatomy of Criticism, distinguished 5 modes of story based on the powers and moral status of the hero. In descending order of power and status, they are:

Task 1 for the writer, I would say, is to locate your story on this scale of modes. The characters you create will need to conform to the mode in which they’re operating. Are you writing about a powerful figure who is changing the world, or about a schmuck who’s going to have the crap kicked out of him?

The next task is to decide on the priorities of your story in terms of its presentation. Here I’m referring to a system described by Orson Scott Card in his book Characters and Viewpoint. He calls it the “MICE quotient.” Here MICE is an acronym for:

Card suggests that every story places these factors in some kind of hierarchy. For example, the milieu of a story is its setting, the world that it portrays. In some stories, this is the most important factor, for example, Lord of the Rings, or possibly the Harry Potter series. The reader is drawn in by the world of the story even more than by its characters or what happens in it.

Some stories have idea uppermost. In this kind of story, issues of theme weigh heaviest; the meaning of what happens is more important than anything else. The Divine Comedy of Dante would be an example of this.

More commonly, stories are character driven: the portrayal of characters is their chief interest. I think that David Copperfield would be an example here.

Finally, many stories focus more on events or plot. Probably most “genre” stories fit into this category: thrillers, science fiction, romance, horror, and so on. Kimmie and I recently watched Jaws again, and I think it is a good example of this kind of story.

All stories contain all of these elements, but they prioritize them differently. Right now, for example, I’m reading Joseph and His Brothers by Thomas Mann, a 1500-page retelling of the Genesis tale of how Joseph is sold into slavery by his brothers and rises to great prominence in Egypt. I think that here Mann ranked the story factors thus:

So Joseph and His Brothers is not a MICE work, but rather ICME. Not long ago I read The Catcher in the Rye by J. D. Salinger. In that story I think Salinger stacked the factors this way:

or CMEI—quite a different flavor of story from Mann’s.

In any case, I think that you as writer need to know how you value these factors, and rank them for your own story. When it comes to developing characters, you need to keep your priorities in mind. The characters in, say, The Lord of the Rings all have a lot less complexity and depth than, say, Holden Caulfield in The Catcher in the Rye. And this is due mainly to the different missions of these stories. J.R.R. Tolkien put milieu at the top of his stack and character at the bottom, because that was what his story required. So character development for him was a relatively simple process. He couldn’t present the full richness of his imagined world and have deep, complex characters; it would have made things too complicated and muddled the mythic quality of his tale.

Those 2 tasks done, you the writer are ready to embark on the project of actual character creation. Stay tuned.