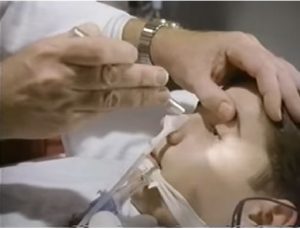 At this stage of my story my memory is a little bit foggy. I just went up to visit Kimmie in our ensuite bathroom, where she is preparing to go to work, to ask about her memory of the evening of 20 May 1989, just a few days after my return from dathun, the month-long meditation program I had attended at the Rocky Mountain Dharma Center in Colorado. That evening, which was a Saturday, I had taken her to The Cannery restaurant down on the docks of Vancouver. There, in the parking lot, before we went inside to dinner, I asked her to marry me–catching her completely by surprise. (“Yes, of course I will,” she said, astonished and delighted.) (And by the way, Kimmie’s clearest memory was of what she was wearing: a short white skirt and a white jacket with polka dots and a peplum. I was in a high-quality tailored suit.)

So, in our window seat and over our delightful seafood dinner we had much to talk about–for not only were we now going to be married, but Warren’s and my TV-series idea about a boy in a coma had taken a step forward. It’s the exact step that I’m not totally clear on now–but I’m pretty sure.

Warren and I had pitched the boy-in-coma idea to Michael Chechik, the producer we were associated with (I’m not sure whether we had yet given the project a title). As I recall, we pitched it because Michael had heard the CBC was looking specifically for kid programming, and wanted to know whether we had any ideas. And of course, we did have an idea–so we told it to him.

I have a vague memory of talking about this in Michael’s office at Omni-Films (again, Warren, if you’re out there and have more concrete memories, feel free to comment). We would have described the basic idea, which as yet did not have any detail: just that a suburban 11-year-old boy falls out of a tree-fort, bonks his head, lapses into a coma, and suddenly finds himself in a world populated only by kids–including two of his friends in transformed guise. Amnesiac about how he got there, he starts searching for his way home–which also means consciousness.

Michael loved the idea, and would have peppered us with fast-talking questions to find out more, where the story would go, etc. We didn’t really know yet–hadn’t worked on the idea since about January, when we’d let it drop to focus on other things.

I believe what happened next was that Michael pitched the idea immediately to a drama executive at CBC Vancouver, probably Phil Keatley, a longtime producer of The Beachcombers. He liked the idea right away too, and told Michael he needed to pitch it to CBC’s executive in charge of children’s programming, Angela Bruce. He might have an opportunity at the upcoming Banff Television Festival, which Angela planned to attend. With “What’s Wrong with Neil?” in competition, Michael was going to be there too. So I think it was on that very day, Satuday 20 May 1989, that Michael had called me to say we’d got our first “yes” from the CBC, and to ask me for some more material on the show idea for him to be able to pitch it at Banff.

With that “yes” and Kimmie’s “yes” to my proposal, it was a pretty giddy evening.

Warren and I got together to try to flesh out the idea more. One issue was the title: what would we call it? We were thinking that the show was an odyssey–a heroic return home through many adventures–but just calling it The Odyssey didn’t seem right. It might be assumed that we were doing Homer’s Odyssey, plus there were any number of other shows out there already called Odyssey of one kind or another. Also, it didn’t seem like a very “kid” title. How many little tykes even knew the word odyssey?

“We could add something to make it more ‘kid’,” said Warren. “The Skateboard Odyssey, The Gumball Odyssey–something like that.”

Yes: I liked that. Spouting “kid” terms, we came up with The Jellybean Odyssey, and felt that clicked. It was an odyssey, but it was a kid odyssey–and conveyed a certain attitude, as well as creativity and mystery. Yes, that was it.

Under this title we typed up some briefing notes and gave these to Michael. Warren and I, in day-jobs and financially stretched, couldn’t go to Banff; Michael would have to represent the project there.

Soon Michael was back and we got the story. He had indeed been able to meet Angela Bruce, and had verbally pitched The Jellybean Odyssey to her.

“She loved it!” said Michael. “She thought the idea was great–but she wants to see paper on it. She told me to send some material for her desk in Toronto. So can you guys come up with that?”

Later I heard from Hart Hanson, who was at Banff, that The Jellybean Odyssey was the buzz of the festival. Its name was being whispered among people there: “What’s this Jellybean Odyssey? There’s no paper on it anywhere!” (By the way, this is a textbook example for how to generate “heat” around a project: hint at its existence and that it’s great, but don’t let anyone know too much–create thirst for it. Create a sense that there are insiders who know more about it than you do…)

I recall typing up about 3 pages of material–we didn’t have any more. We called our character Billy. I don’t remember whether we yet had the idea that his father was dead, and he thought that he could find his home by finding his dad. That was probably a later development. We did have the idea of the kid-only world, and that it would be self-organized into “clubs”–kids sticking together around common interests and activities, with their own politics, justice, etc., and with the older teenagers lording it over the rest like babysitters who never have to account for their actions.

I gave the pages to Michael and he sent them to Toronto. On 1 July 1989–another Saturday–he called me.

“I just heard from Angela Bruce,” he said. “The CBC wants to put The Jellybean Odyssey into development.”

My skin came up in goosebumps. I couldn’t believe it. A national network wanted to put my TV show into development. In show-business terms, I was becoming even more “real”. I started trying to phone Warren, who I believe was up in the Yukon fighting forest fires. I had to tell him that we were moving from TV writers to TV series creators.