Welcome to another installment of my character-creation process for storytelling. I started out by calling the series “creating characters in epic fiction,” but really I’m talking about creating characters in general, so I have shortened my title accordingly. I would use the same method for any story I was creating.

Last time I talked about choosing a basic archetype for the character based on the 16 archetypes described in The Complete Writer’s Guide to Heroes & Heroines by Tami D. Cowden, Caro LaFever, and Sue Viders. That gets you off to a running start in creating a vibrant, distinct character, but I find that I need more to create the chassis for my character. For this I turn to another resource, and this time it’s not a writing text at all, but a spiritual self-help book: Sacred Contracts: Awakening Your Divine Potential by Caroline Myss, published in 2002. 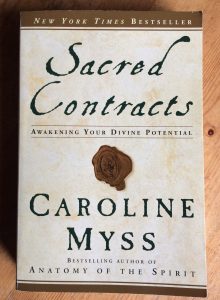 Downloading characters from the 8th chakra

Why this book? Because Caroline Myss, like the authors of Heroes & Heroines, provides a list of archetypes. Myss’s theory is that, in addition to the 7 chakras of Indian yogic philosophy, there is an 8th chakra that is centered above the crown of our heads, and this 8th chakra contains a number of archetypes that manifest in the makeup of our individual personalities. She suggests that each of us is actually a blend of 12 of these archetypes, and she makes use of astrological techniques to arrange these archetypes in a horoscopelike wheel. In this view, we each embody different mini personalities that manifest at different times and in different departments of our life.

This sketch does not do justice to her idea, which I find fascinating, but for our purposes as writers it’s not necessary to buy into the theory or to use all of its techniques. All I want is the list of archetypes that Myss includes at the back of her book: about 70 of them. And Myss encourages the reader to discover more archetypes of his own to add to the list, which activity is also useful from a writing perspective. I won’t list them all here, but to give a flavor of her list I will note a few from the early part of the alphabetical list:

In each case Myss provides a write-up for the archetype describing its main drive along with its positive and negative manifestations, and provides some examples of it from films, television, literature, and mythology. From a writing perspective, what’s useful here is that these archetypes are usually goal oriented: they all feel driven to do something.

Myss is not equally clear about this in each case, but it’s easy to see that the Addict archetype, for example, will be driven by an overwhelming need for something external. Typically this will be a drug, but it can just as well, as Myss notes, be work, sports, television, exercise, computer games, spiritual practice, or negative attitudes. The Addict feels that the drug or the behavior has mastery over his will, and he serves it, sacrificing everything else to it. An Addict is highly motivated: he must have his drug, he must have the thing he’s addicted to, and he will sacrifice everything else to get it. It’s bigger than he is; it’s stronger.

This motivated quality is what these Myssian archetypes bring to the character-creation mix. They all have something to do. They are not just standing around waiting for things to happen; they have a focus, a sense of purpose. In this way they are like the gods envisioned by the ancient Greeks. Aphrodite, for example, was the human sexual instinct personified. She had a single drive, a single function: to bring male and female together in the mating act. She never tired of doing this. Like the instinct itself, she was immortal and could not be eliminated. The Myssian archetypes are like this. They are personifications of human functions and drives, and they include the accessory qualities and attitudes that go with these drives.

Let’s do a quick example. I’ll take the first heroine on the list of archetypes from Cowden, LaFever, and Viders’ book: the Boss. This woman is assertive and in control. She’s used to giving orders and having them obeyed. For her, worldly objectives are more important than people’s feelings, so she’s not very good at or interested in relationships. She’s capable of love, but this tends to be a project for her, as everything is, and she comes on strong. She doesn’t take “no” for an answer.

There’s more to the Boss than just these traits, but this will get us started. What we don’t know is what exactly she is trying to do. What is it she’s so focused on? Now we’ll grab a Myssian archetype. Let’s take the next one on the list: Advocate. In Myss’s words:

The Advocate embodies a sense of lifelong devotion to championing the rights of others in the public arena.

This Boss might be a lawyer or a lobbyist, or possibly a social worker or a nun, or maybe a politician or a journalist or a society lady. The choice will be dictated by the needs of our developing story. But we’ve added a motor to our chassis: our Boss lady has a focus for her energies. Suppose she’s a leader in an organization devoted to freeing journalists imprisoned by repressive regimes. Her Advocate nature makes her relentless in her drive to achieve her objectives here, and her Boss nature dictates her methods. We might imagine her cracking the whip over her underlings and fearlessly and effectively taking on powerful opponents.

This character reminds me of Jane Craig, Holly Hunter’s character in the 1987 movie Broadcast News, written and directed by James L. Brooks. Jane Craig is a television news producer, and she would probably regard herself as an Advocate for the public’s right to know what’s going on in the world. She has high journalistic ideals and takes her job seriously: she will run roughshod over anyone who stands in the way of getting her news stories on the air. And, true to the Boss archetype, she fumbles and stumbles in her personal dealings with people. She feels comfortable only when giving orders and pushing her agenda.

So we have the beginnings of a character: we have snapped together a chassis and a motor. There is much more to be done before the process is complete, but having gone this far we already know that our character will have a strong attitude and a sense of purpose. She will be able to grab and hold the reader’s or viewer’s attention.

With a chassis and a motor it might seem that we have the inner workings of our character all set to go—but we don’t. There’s more to do, but that will be for next time.

In the meantime, take a look at my Creating Characters reading list (one of a growing collection). If you haven’t already done so, now would be a good time to catch up on parts 1 and 2 in this series.