In part 3 I described how to start building a character by snapping together 2 different kinds of archetype:

I likened the heroic archetype to the chassis for a character, and the psychological archetype to a motor, to give the character a sense of drive and purpose. In part 3 I suggested that there is still more to do. By this I meant that the character must be created with the wider context of the story in mind. A character, unlike a real human being, is not an end in himself; he exists to serve the needs of the story in which he occurs. He needs his own integrity, and to that extent he is a whole, but in terms of the story as a work of art he is a part, and everything about him must serve the needs of that greater whole. Like an engine part, he needs to function well in his own right, but that functioning must serve the greater good of the overall performance of the engine. 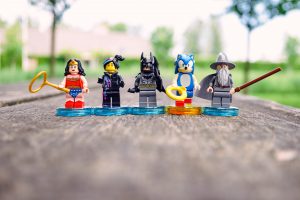 To that end, we need to consider our characters from another archetypal point of view: that of their story archetype. This amounts to asking what role the character is going to play in the story, or what story function the character will have. The most central and obvious role is that of the hero or protagonist: whom the story is about. And while this role is, in one sense, covered by the choice of heroic archetype mentioned above, in another sense it needs to be specified in a different way, looking from the higher vantage of considering the mission of the story as a whole. Our story needs a hero, but whether he will be a romantic hero, a tragic hero, a comic hero, a dashing “hero hero,” or maybe an antihero, depends on the kind of story we’re telling, and this will affect our choice of “heroic archetype.”

Different writers have broken down the different kinds of characters that appear in stories—that is, the different story roles or functions that they can perform—in different ways. The two that I find most inspiring and useful are presented in:

The first of these was written specifically as an aid to writers, the second is a scholarly (and massive) work aimed at the serious student of storytelling, but both, in my opinion, provide excellent help for the writer working at the early stages of character creation. Christopher Vogler, inspired by Joseph Campbell’s ideas about myth, presents storytelling as an account of the primordial journey of the hero, which goes through certain archetypal stages in what Campbell calls the “monomyth.” Christopher Booker, examining critics’ efforts through history to categorize the basic plot types, discovers that the deepest way to understand the story functions of characters is in terms of the psychological archetypes described by Carl Jung. In this view, stories are like maps that help us in our own journey toward wholeness, and their characters represent forces within our own psyches as we each make that perilous but fulfilling journey.

All right, so what does that mean for us as storytellers? It means that by using these methods of discovering or assigning the story functions of our characters, we get our story organized. For each character we get a sense of what he’s doing in the story, why he’s there; and this contributes mightily to a character’s sense of purpose and mission. And, contrariwise, if we can’t find a real purpose for a character, it may be a sign that he needs to be fired from that story, or, possibly, combined with another character who does have a definite function. Combining two characters can make for a richer single character: the, say, whiny little sister and the socially climbing girlfriend meld together into a single, whiny, socially climbing person, whether sister or girlfriend, and that person becomes a more rounded character in the process. (You could also meld positive traits, or combine positive and negative: a compassionate sister and a socially climbing girlfriend can become a compassionate, socially climbing girlfriend—a complex and potentially interesting person.)

Let’s look first at Christopher Vogler’s mythic archetypes. When he examined Joseph Campbell’s breakdown of the monomyth of the hero, he found 7 characters in that archetypal adventure:

He devotes a chapter to each one of these; I won’t try to describe them in detail here. Their names give you a sense of their functions, and they tend to appear at distinctive stages of the hero’s journey. It’s well worth reading Vogler’s book to learn more about this.

Now let’s look at Christopher Booker’s archetypal characters, based mainly on Jung’s psychological theory of the process he calls individuation, or the individual’s journey toward wholeness. In Booker’s view, all storytelling is ultimately about this journey. Psychic wholeness is represented by the archetype Jung calls the Self, which he also calls the “God-image in man.” The quest of the healthy ego is to realize and become one with this Self, which is equivalent to supreme spiritual realization. When the ego falls off that path and starts to focus on its own importance, then you have the phenomenon of selfishness and the vices that go with it. In Booker’s scheme, the characters in stories group themselves around these two poles, with “light” or good characters representing aspects of the Self and the journey toward it, and “dark” or bad characters representing the fixated ego. He sets them out thus:

These lists, both Vogler’s and Booker’s, provide different schemas or grids to lay over a story. I think of a command I remember from earlier versions of Windows, for when icons on the desktop became scattered and messy: it was called “snap to grid,” and it caused all the icons to be moved instantly into an orderly arrangement of rows and columns. These lists of archetypes allow story characters to be snapped to a grid: the grid of the functions they serve in the story. Depending on the kind of story you want to tell, you might want to have a villain for a character. Well, this character might then partake of the qualities of the Shadow archetype in Vogler’s scheme and the Dark Rival in Booker’s scheme. This will tell you a lot about the kinds of qualities and story duties this character might have.

I’m referring to all of the archetypes on these lists collectively as story archetypes, and I think it might actually be best to start here, that is, to decide on the story archetype that a character will be based on before moving on to the other kinds of archetypes, what I’m called heroic and psychological archetypes.

You might think, Wow, that’s a lot of archetypes to be juggling; it sounds complicated. But I don’t see it that way. To me it’s like a process of triangulation: using these 3 or 4 different schemes allows you to start pinpointing your character. The character begins to emerge from the gray fog of uncreatedness to become something—someone—specific and definite. You’re still just beginning the process, but you’re making a strong beginning. You can already feel sure that this character will carry weight in the story.

Creating characters is difficult. I have been working on the characters for The Age of Pisces for years now, and the work is not finished; I am still getting to know these people. And the tools to do the job have only gradually come into my hands. This is my effort to share what I have learned with you. May you—and all readers and viewers—benefit!

Next I think we’ll need to look in more detail at how to combine these archetypes. Stay tuned for that.

In the meantime, take a look at my Creating Characters reading list (one of a growing collection). If you haven’t already done so, now would be a good time to catch up on parts 1, 2, and 3 in this series.